Spring is an exciting time of year! The weather warms up, the days get longer, and the drama gets that much more explosive in the land of Port Charles. Who’s set to make a big comeback in the next few months ahead? Will Sonny ever return to his loved ones? What will Peter do now that the jig is up? Below are some General Hospital (GH) plotline predictions for spring 2021.

Drew Cain passed in such a way that he could easily open a door for a return. With all that is going on with Peter August, GH fans desperately need a hero to swoop in and nail him for all he’s done with some hardcore “evidence”. Could Drew be that person this spring?

When Drew first came to town (and everyone thought he was Jason), he and Elizabeth shared an interesting romance. It was sort of built on lies; however, the chemistry between them was real. If Drew were to come back, could he rekindle his relationship with Liz? Not only did Drew have a connection with Jake, but he was also a good father figure to both Cameron and Aiden.

10. What’s Next For Roger Howarth?

Franco’s gone, but that doesn’t mean GH fans have seen the last of actor Roger Howarth. In fact, the actor made it clear in a recent interview that he’s simply “taking a break” from the show and that the producers have something else on the horizon for him. Could he return as Drew? It could be a possibility!

There’s also a chance that Franco could stay in touch with his loved one as a ghost. GH loves featuring ghostly appearances now and again, and Baldwin could have a very long stint visiting his wife Liz, her boys, as well as others like Jason, and (if he returns) Drew Cain. He may also “haunt” Peter.

Sam and Dante are sure to get that much closer over the spring months. They’ll move forward with their budding romance and turn their “friendship” into something more. Not only do they have Leo in common, but as single parents, they’ll share time with each other’s kiddos. Things will move a lot faster between them during the next few months.

Actress Emme Rylan (Lulu) returned to Los Angeles recently, after embarking on a family road trip after her GH release. She documented everything on Instagram, including her L.A. return. With Emme back home and close to the show’s set, could Lulu make a comeback? This could place a huge snag in the Sam/Dante romance.

6. Maxie Has Her Baby

Maxie is set to have her little one soon. With that said, whenever a baby enters the land of Port Charles, there’s always drama! Could there be health complications with her daughter once she is born? Perhaps she needs a blood transfusion or something that only Peter can offer as her bio dad? This would bring Peter into the baby’s orbit, and Jones’s hands would be tied. Maxie doesn’t want her baby near August, but she may not have a choice if she “needs something” from him to keep her child healthy and alive.

Cyrus and Peter are set to become chummy-chummy soon, so what if Renault helps August kidnap Maxie before the baby is born? The two would have goons hold her hostage until she gives birth, and then steal the little one and take her to an undisclosed area, leaving Maxie heartbroken and alone. Peter would skip town with his daughter, and the hunt would be on to find Jones’s baby and bring August to justice.

With Phyllis being the link that ties both “Mike” and Nina together, there’s no question that Reeves will run into Sonny and realize he is alive. The real question is, will she tell the others when she finds him? Probably not, especially after everything that has gone down. From Jax and Carly hiding all that information about Nelle to Michael cutting her visitation with Wiley, Nina is scornful and will do all she can to get back at them all. She’ll use Sonny in the process.

3. Nina Will Visit Him

Nina will run into “Mike” and pretend she doesn’t know him. She’ll think fast and on the spot. As she has the same hair like the woman in his dreams, and because he does “know” her, Sonny will be drawn to Nina. At first, Reeves will visit him just to get back at the others; however, as “Mike” starts to fall for Nina, she too will start to develop feelings for him this spring.

Jax will eventually give up on trying to get Nina back. He’ll place some solid attempts her way in early spring, but then walk away. In the meantime, he and Carly will start to re-catch some feelings. They share a daughter, and in the past the only thing that kept them apart was Sonny. Without Corinthos around, they will gravitate toward each other.

There’s something between these two and it’s clear that Valentin has feelings for Anna. The feeling seems mutual. With Finn out of the picture, Devane will find herself spending more and more time with Cassadine. Maybe they’ll decide to put their heads together once again to snag Peter? Sadly, Brook Lynn expecting will eventually come to the surface. Valentin is an excellent father and knowing he has another child coming into this world will start to occupy his time. BLQ and her baby will become a wedge in the potential Vanna relationship. 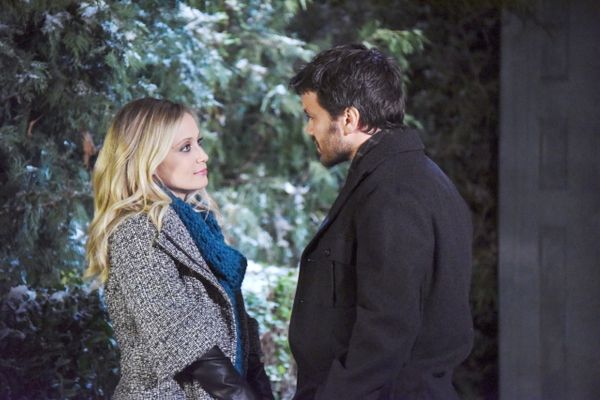