Will Nina’s two worlds finally collide? Will “Mike” ever return to Port Charles? Will Brook Lynn and Maxie continue with their baby charade? Will Valentin and Anna realize they should be “more than” friends and superspy colleagues? What will happen with Britt and Jason? General Hospital (GH) fans just love to speculate! As such, below are some GH plotline predictions for summer 2021.

Can Nina keep “Mike” at bay for much longer? They shared a kiss, and while Nina’s trying to hold back her feelings as much as possible since she’s aware of the repercussions, she’ll eventually allow her emotions to take over. She’ll jump into a relationship with “Mike” at some point over the summer, which will complicate things.

Jax’s recent blackmailing of Michael may pay off. Nina is back in Port Charles, however it may be a temporary thing. She might decide she can spend some time in town (with Wiley), and also spend some time in Nixon Falls (with Sonny). Maybe Nixon Falls and “Mike” become a weekend getaway, or perhaps she just divides up her time equally. Traveling back and forth might become risky, and her “secret life” could get exposed. But the two towns aren’t far from each other, so she’ll start living a double life.

Nina’s worlds might collide at the end of July or early August. She’ll solidify a relationship with “Mike” and while traveling “back and forth”, someone from Port Charles will follow her back to Nixon Falls. Maybe it’s Jax again, Michael, or even Willow, but when this happens, the person will realize that Sonny is alive, and Nina’s known about it all this time. It might even be Carly herself.

9. Maxie, BLQ, and The Baby Charade

Baby-switch storylines always take forever to resolve. There’s no way that Maxie or Brook Lynn will learn of Peter’s demise this summer. It may not even come out in the fall or winter of this year! The good news is that Maxie knows BLQ has her baby, and she can still see Louise; however, considering what everyone “thinks” Jones has gone through (i.e. losing a baby), someone is sure to advise her to stay away from the child for her mental health. Who will this be? Probably Olivia, Sam, Ned or even Valentin.

In a perfect world, Maxie could still spend time with Baby Louise and bond, but soaps are all about the drama, so that won’t be the case. Jones will have to watch BLQ with her baby from afar and try to sneak in private visits here and there. Her heart will be torn, and Maxie is sure to struggle with Louise being in the same town as her, but not being a part of her “world”.

Since Dr. Austin helped with Maxie’s delivery, it’s only natural for some to think that they could start a romance together. This is entirely possible, but GH spoilers also hint that he’ll have some interest in a “prominent” local family. Could this be the Quartermaines? What sort of “interest” could he have? Will he and BLQ engage in a romance? Could he see the similarities between the baby he delivered and BLQ 2.0? (They are the same baby, after all!)

Valentin will certainly be a “hands-on” father, but this doesn’t mean that he won’t have time for a little romance this summer. Now that Anna is single-pringle, Valentin might be more prone to move in. These two have been dancing around something more than a friendship for years now, but will they finally take the plunge this summer? Here’s hoping!

Jason’s destined to be single for the rest of his life. After all, he really can’t let anyone too close because of his mob ties and the target on his back. GH spoilers hint that a mob war could be on the horizon this summer. Sounds like Britt and Jason may continue their relationship, but it’ll be on the down-low. Over to Dante and Sam, despite the bickering between these two as of late, they’ll turn a corner in July. They may even hit the sheets by the end of the summer. There’s just too much chemistry there!

4. Can Elizabeth Move On From Franco

Liz and Finn have a secret they share, which will only bring them closer together. Sprinkle in the fact that Elizabeth is helping Finn try to find a cure for Chase, and romance will certainly be on the horizon for them this summer. Finn and Liz make a good match, but just as they cross the line, an unexpected visitor is sure to come to town.

This is pure speculation, as nothing has been confirmed, but any GH fan can see that Hayden’s baby daddy hooking up with her sister is a recipe for disaster (if Barnes decides to return to Port Charles). With Alexis and Shawn currently looking into finding Hayden’s shooter, her name has been popping up a lot on the soap opera as of late. A comeback is probably in the books, come mid-to-late summer. Perhaps, even early fall.

Across town, Willow and Michael will continue to keep their romance hush-hush. Finn and Liz might be able to find a treatment for Chase condition, but they won’t find a cure just yet. Even once they do come up with something, Harrison has been sick for so long, he’ll have quite the recovery ahead of him. This means that not only will Millow have to abide by Jax’s “blackmail”, but they’ll also have to be much more careful when it comes to hiding their relationship. They may even decide staying away from each other is the best bet.

Actor Cameron Matheson, an All My Children alum, is heading to Port Charles this summer in a mystery role. Who could he end up playing? It would be nice to believe that Drew Cain might be returning to the town, so that’s a possibility. Could he be another child linked to Faison? Port Chuckles could use another “bad guy”, now that Peter August has passed. What about a Quartermaine or Cassadine that fans don’t know about? With no other information on who this character could be or who he’s tied to in storylines, the opportunities are endless! 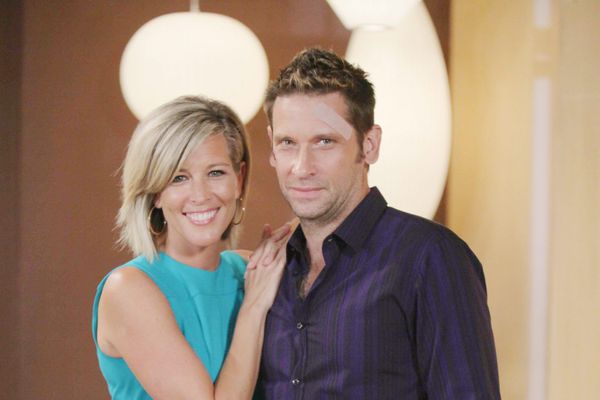