Calling all General Hospital (GH) fans! Curious about what the following week has in store for Port Charles residents? Seems like more intrigue, drama, and adventure! Learn about what will happen to “Kevin,” Franco, JaSame, Peter, CarSon and others in the GH spoilers for the week of February 4, 2019.

9. Franco Gets Wrapped Up In “Kevin”

GH spoilers indicate that Franco will reach out to “Kevin” this week coming. Perhaps he’ll need some advice on something, and turn to the so-called good doctor for help. Unfortunately, as the days progress, Ryan will find a way to use Franco as a pawn in his game. Sounds like Franco might be in trouble.

The above spoiler could really mean anything. Franco may be pinned for all these murders as “Kevin’s” pawn, or he could be Ryan’s next victim. Either way, seems like bad news for Franco Baldwin. Franco will continue to bond with Aiden this week and take him ice-skating; however, as the days go by, GH spoilers state that Liz will lean on her boyfriend’s dad, Scott. Could she need to be comforted because Franco is in danger, thanks to Ryan?

GH spoilers tease a surprise in store for Ava Jerome, leaving her feeling very stunned. With all that is going on with her and “Kevin,” could she be inching towards seeing something that reveals he is Ryan? He really could do something that finally raises her eyebrow on his behavior. She’s always been his biggest supporter.

GH spoilers tease that Liesl will rethink the power Maxie has over Peter. As we all know, August let Obrecht off the hook because of Maxie. Regardless, Liesl will attempt to exploit the bond these two budding lovebirds have for the sake of her own agenda. Will she succeed? Most likely!

As the week progresses, GH spoilers indicate that Peter will pull away from Maxie, and she’ll be perplexed about the entire thing. Is he hesitating on their relationship because of Liesl, or is it around guilty feelings he has in regard to Nathan? Either way, the couple will hit a stumbling block.

Sasha will return to Port Charles, taking Nina off guard. Even more, she’ll attempt to influence her “mom” when it comes to Valentin. In fact, GH spoilers tease that Nina will have a huge change of heart when it comes to something. In other Sasha spoilers, she’ll also spend some one-on-one time with little Charlotte.

This GH story is heating up! This week, spoilers tease that Sam and Shiloh will meet up. Will Sam be able to get the goods on this cult leader in order to bring him down? Here’s hoping! In other news, Kristina will get a burst of energy this week, and Sonny will talk to Alexis about some concerns he has. This conversation could very well center around their daughter. Other Alexis spoilers for this week reveal someone will catch her off guard.

GH spoilers hint that the Jackal and “Stone Cold” will have a conversation this week, and it’ll center around what Spinelli has found out during a digging session. Here’s hoping he has the information Jason needs to move forward with this case. Spinelli has always been able to pull through for his best friend.

Lastly, GH spoilers indicate that Lucas will be understanding to someone’s situation. Could this involve Michael? We all know that Wiley is really his son, and perhaps he may confide in Lucas around lingering feelings of grief, in which Lucas will feel sympathetic towards him. This secret is on the cusp of being revealed and the next month should offer some interesting scenes with all players involved. 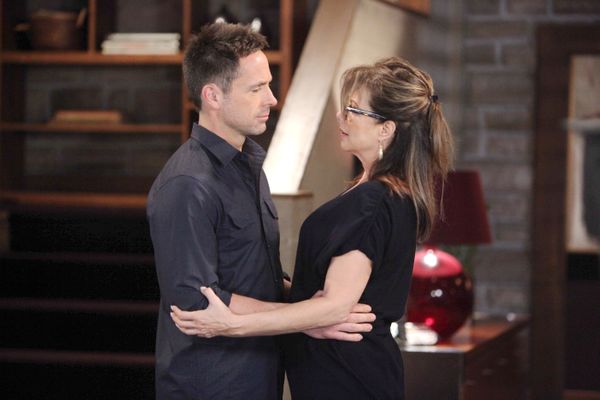