In April 2016, the best and biggest in the country music industry descended upon Las Vegas for one of the genre’s biggest nights, the American Country Music Awards. As always all eyes were on the stars as they entered the MGM Grand Garden Arena and as always the styles varied from simple, to bold to classic to sexy, and through it all some styles definitely stood out above the rest. Along with new couples on the red carpet, and the drop dead gorgeous fashion there was a lot to pay attention to, but when it comes down to it, these five ladies had heads turning for all the right reasons! Check out the 5 best dressed stars at the ACM’s.

Jessie James Decker has always been a master of making simple fashion look fantastic and she hit the mark again with her strapless pink dress, form fitted to show off her amazing post-baby body. She set off the look with silver stilettos and jewelry, not to mention some amazing tousled and wavy hair.

It was a big night for Kelsea Ballerini as the young singer not only looked great on the red carpet, but she also took home the award for New Female Vocalist of the Year. Ballerini rocked a strapless deep blue Georges Hobeika gown complete with a lace overlay. She set off the glamorous look with with a simple hairdo and Swarvoski earrings and rings.

Carrie Underwood opted for a more glitz and glam look for her ACM red carpet walk, and it definitely paid off! The gorgeous blonde donned a form fitting shear gown with beaded embellishments. With her stunning lob haircut and drop earrings, Underwood mastered the sexy yet classy look of the night.

No one could take their eyes off of country queen Miranda Lambert during her red carpet arrival for so many reasons! For the first time since her split with Blake Shelton and since beginning her new romance with Anderson East, Lambert and East stepped out together for their red carpet debut as a couple. Lambert looked stunning in a deep plunging yellow Christian Siriano gown. Not only did she show off her killer figure in the silk number, her Joyce Echols stilettos received a lot of attention with their mini gun and holster embellishment, which is classic country and classic Lambert. She also did well on the inside, taking home the award for Female Vocalist of the year!

It is hard to believe that only two months ago Jana Kramer welcomed a baby girl, as she is right back to her amazing figure which she showed off in a red-hot Rubin Singer halter gown. She kept it simple and sexy with a draped front, high slit and classic black strappy heels. She accentuated the look with dark makeup and gorgeous rings and earrings. 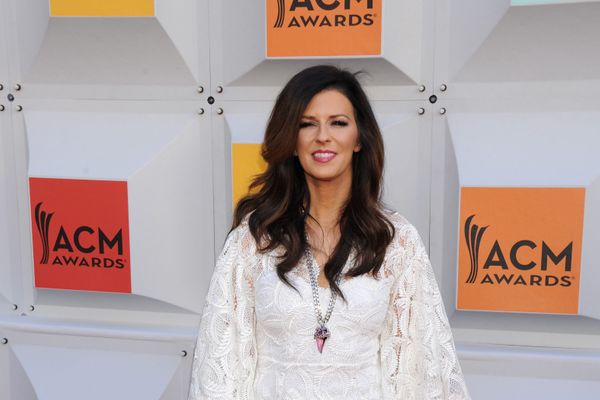