Ariana Grande has exploded in the media the past few years and has had to overcome quite a few traumatic experiences. Despite this, she’s proven her strength and is at the top of the game with her career and her fashion. She’s become the most followed female artist on Instagram and continues to impress with her playful, experimental outfits that she loves to share on the social media app. Over the years we’ve seen Grande have quite a significant transition in her style, so follow along as we retrace all her fashion hits and misses over the years:

Of all of Ariana’s tour looks, one of our least favorites is this ensemble she wore for her Dangerous Woman tour. The pants look impossible to dance in and aren’t the most flattering to begin with. We much prefer her signature over-the-knee look and cute minidresses! 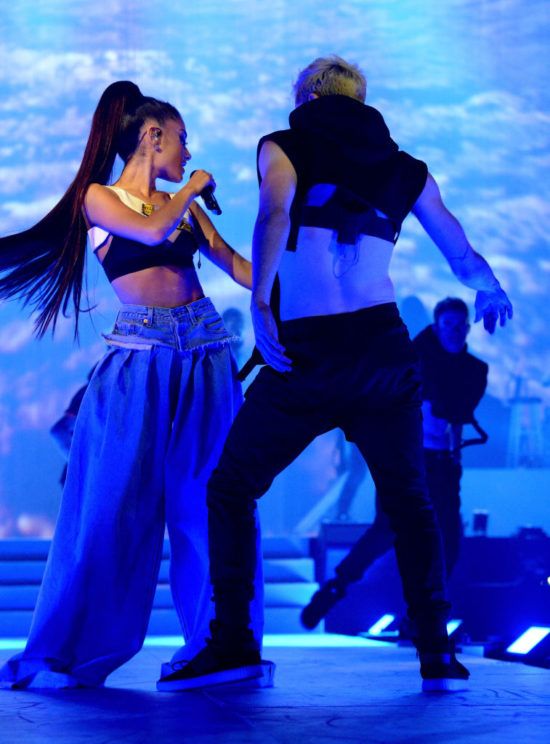 We could never forget this hot pink slinky dress that Ariana Grande wore to the MTV Movie Awards in 2016. Her stylist, Law Roach, used Marilyn Monroe as inspiration when styling this Gentlemen Prefer Blondes-inspired outfit. The look feels very old Hollywood and glamorous, which is exactly why it’s one of our all-time favorite ensembles of hers! 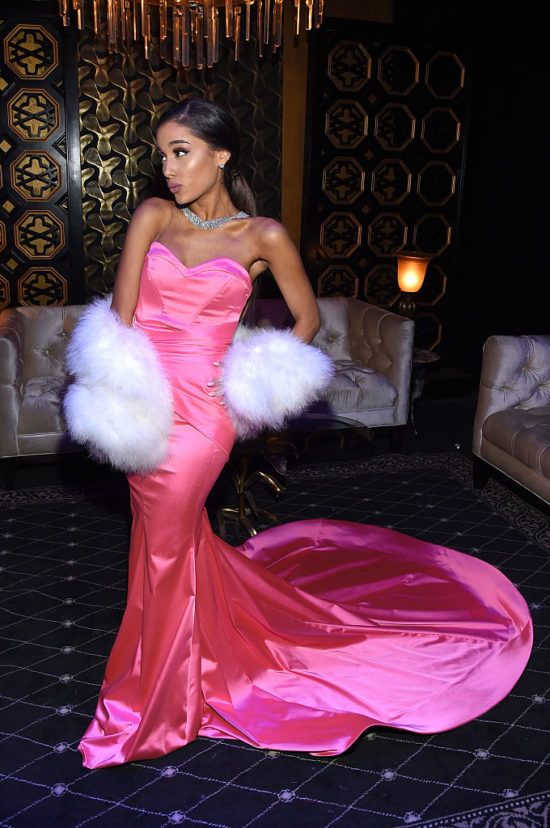 While we certainly love how distinct and unique Ariana’s Grande’s style is, there have, unfortunately, been a few misses along the way! We have to admit that this black overall look was highly questionable and one of her least flattering of all time. She wore the look in 2016 to a press red carpet for Hairspray! Live. 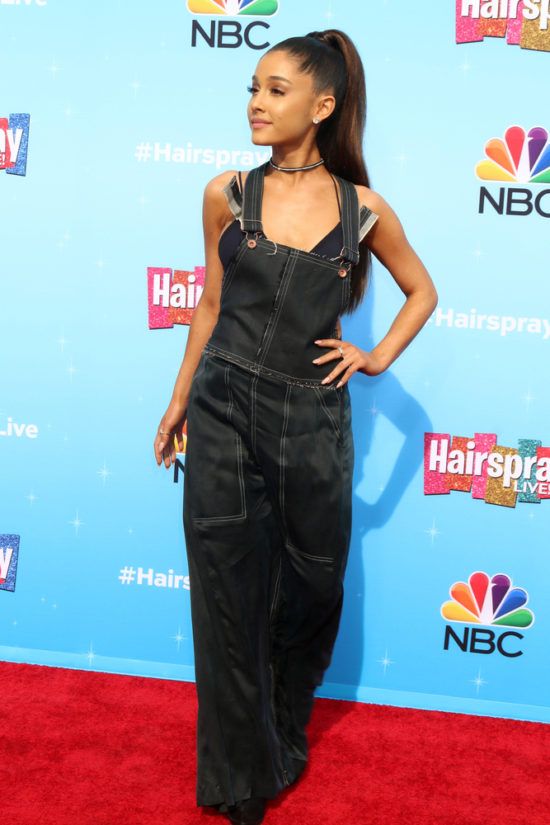 One of the most memorable and classic Ariana Grande looks is this outfit she wore to the Billboard Music Awards during the Dangerous Woman era of her career. The look consisted of a black cupcake-inspired minidress, a bold sparkling choker and her signature over-the-knee boots in leather. It was the perfect combination of sweet and sultry, which is the epitome of Grande’s style. 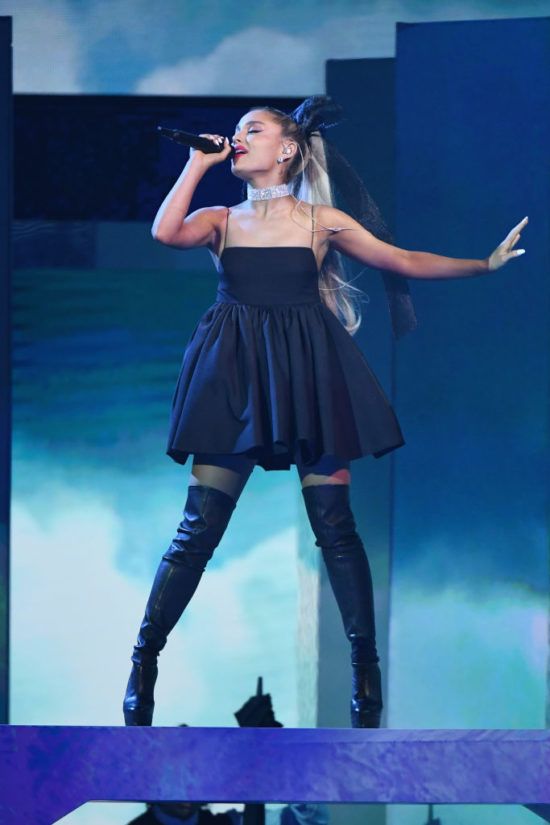 As much as we love Ariana Grande’s oversized, active-wear inspired wardrobe, there are simply some outfits that take it a little too far. This orange costume from her Sweetener tour was one of them! The baggy boots paired with the oversized puffer jacket were a little overwhelming when paired together. 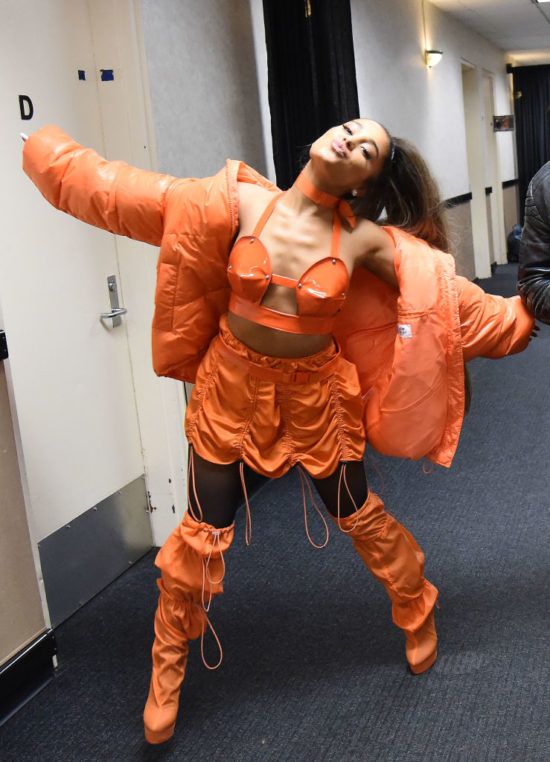 Back in 2014, Ariana stepped out at the Kids’ Choice Awards wearing a striking tangerine dress with cream pumps. We absolutely love how beautifully this shade of orange flatters Grande’s olive complexion. At this point, she hadn’t coined her signature ponytail and it’s refreshing to see her with her hair long and straight. 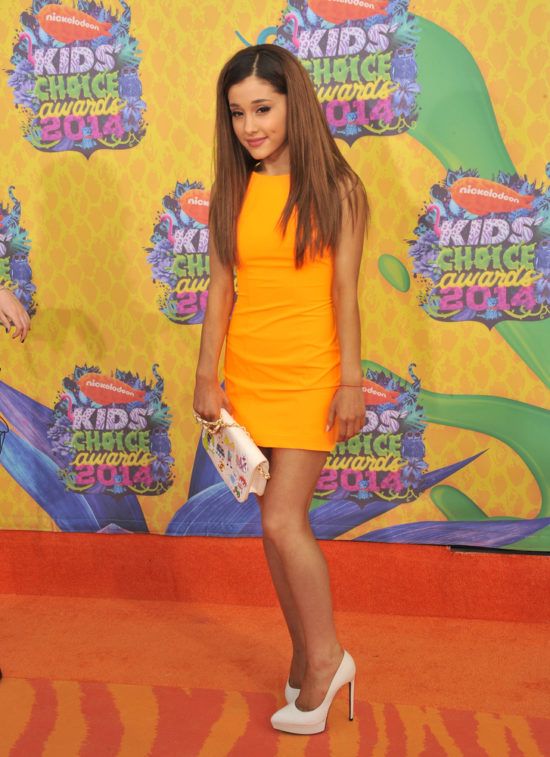 Ariana Grande has experimented with her personal style for years and there’s been an obvious drastic change since her Nickelodeon days. As much as we love this modest, teenage version of Ariana, this particular look feels quite safe, non-experimental and a little forgettable. We much prefer how unique and defined her current style is in 2019! 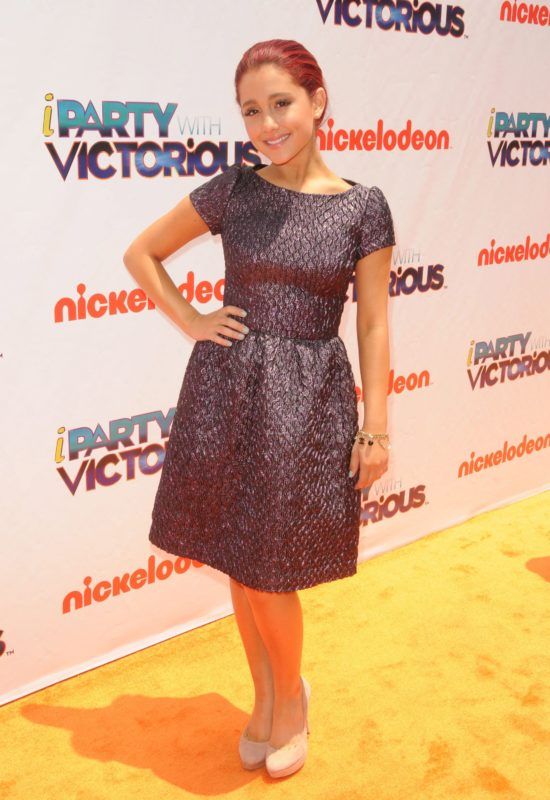 Ariana made heads turn on the 2015 Grammys red carpet when she stepped out in this gorgeous white and silver floor-length gown. The look was sleek, but also flashy, and she wore her iconic ponytail to make it personalized and true to her style. 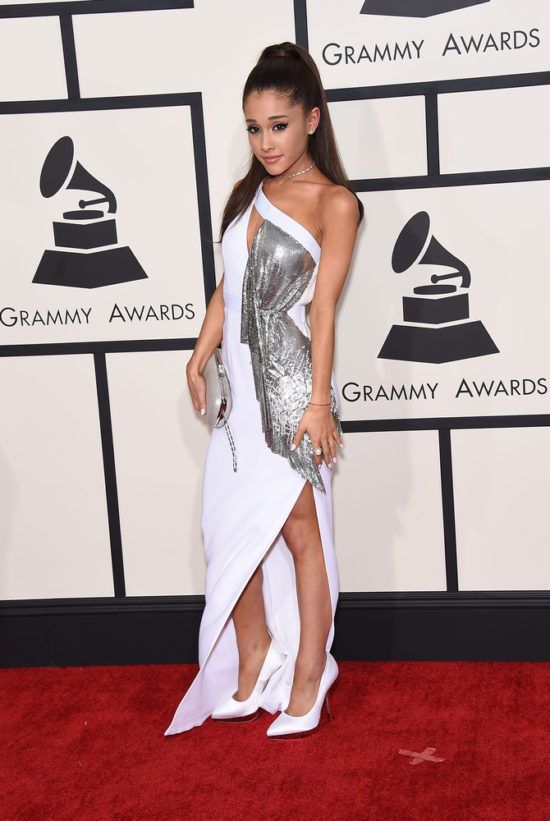 In 2013 Ariana Grande stepped out at the Style Awards wearing a blue and white midi-length dress that was the epitome of sweet and innocent. While we definitely think this dress looks lovely on her, it simply didn’t feel memorable or unique to her personal flair. In 2013, it was clear she was still in the process of working out the image she wanted to portray of herself. 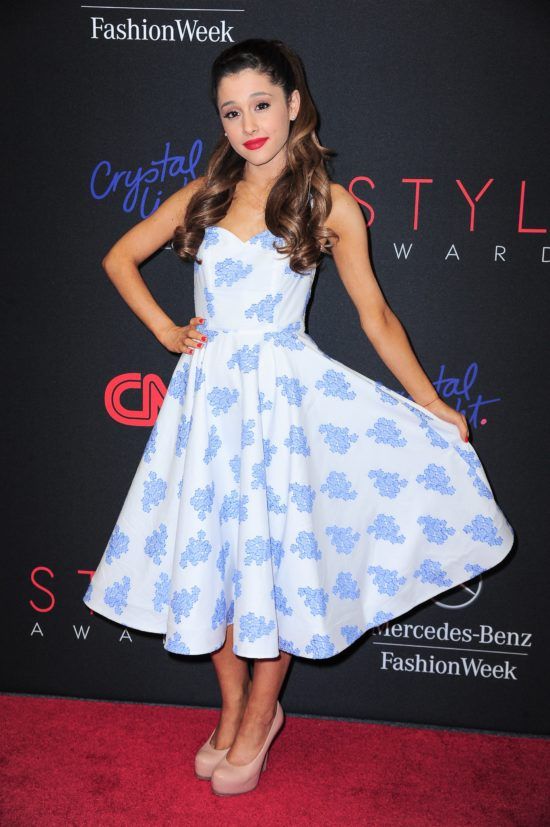 Ariana Grande was a total bombshell at the 2014 MTV Music Video Awards in this leather minidress and over-the-knee leather boots ensemble. By 2014, she was clearly trying to shed her good girl Nickelodeon image and entering her way into the full-blown pop star realm with the release of her album Yours Truly. 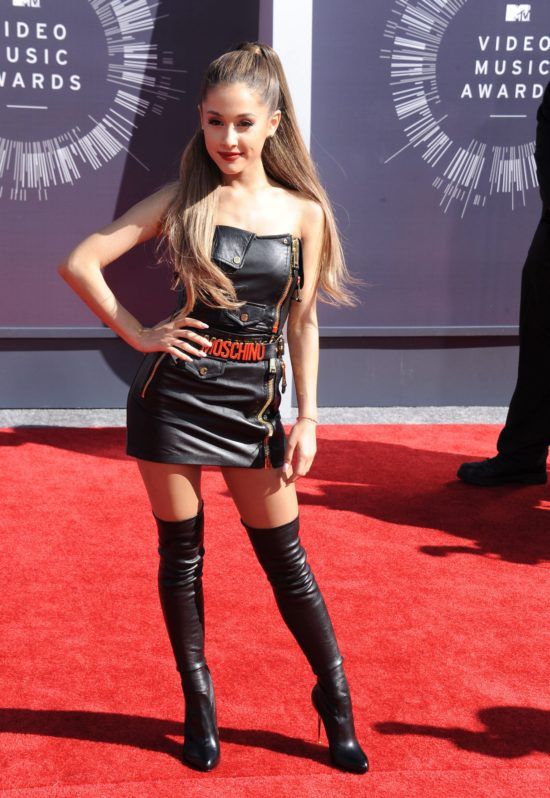 The 2014 Grammys was yet another example of Grande being unsure of what her unique personal style was. While this dress is quite pretty, it wasn’t memorable or show-stopping. The cut of it also hit at an awkward height on her legs which made her petite figure appear even tinier. Needless to say, this simply wasn’t one of our favorite looks of hers from the bunch! 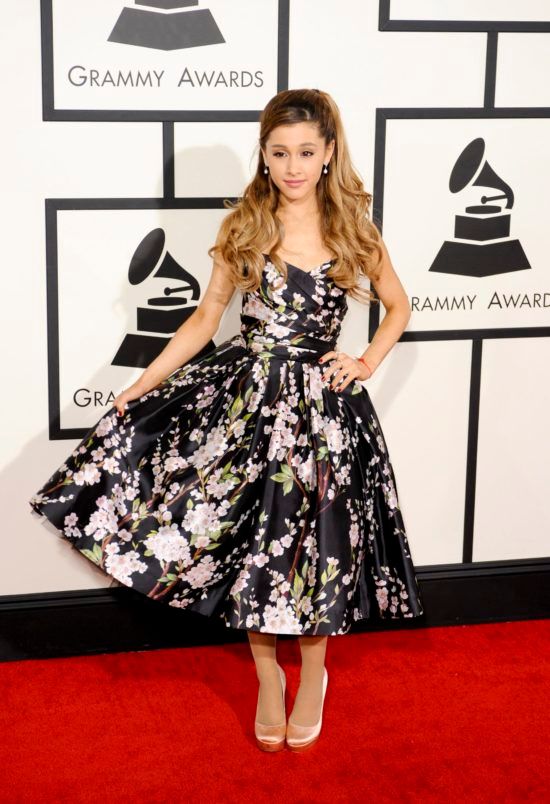 Ariana Grande undeniably made heads turn at the 2016 Billboard Music Awards when she stepped out wearing this black and electric blue cutout dress. The Atelier Versace number worked beautifully to complement her golden skin and we love that she rocked her iconic swinging ponytail for the event. This entire look rang true to the beginning phases of discovering her personal style. 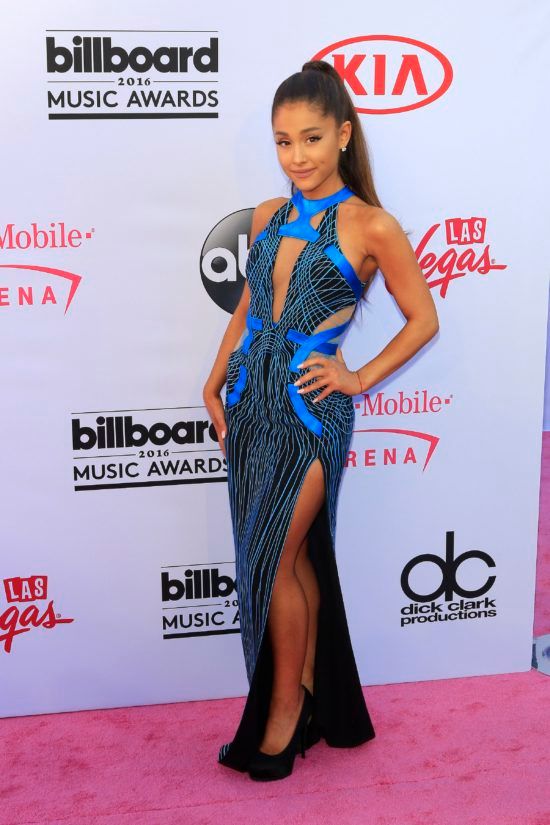 One of Ariana’s strangest looks was when she wore this macaroon-embellished dress to the Teen Choice Awards in 2012! As adorable as she looked, we simply can’t embrace food being displayed on a piece of clothing. 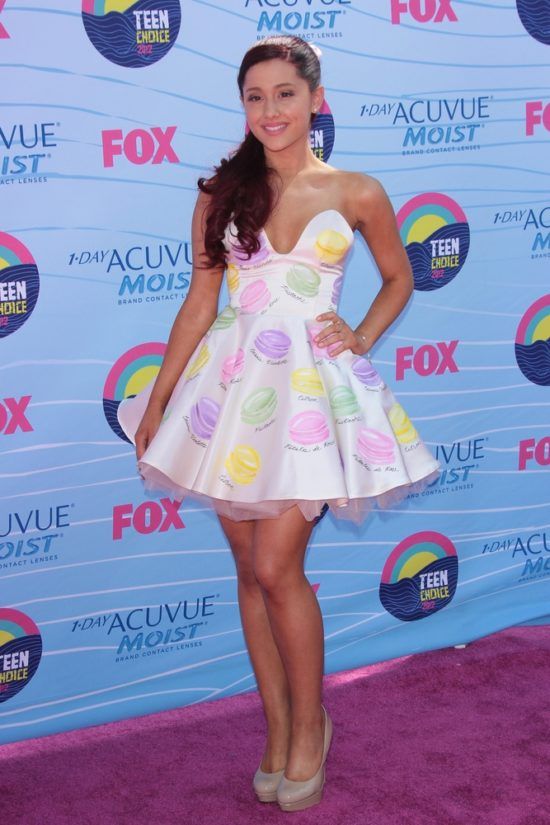 Ariana Grande looked like a total popstar diva at the 2016 Grammy awards where she stepped out wearing this sleek red floor-length gown. This color definitely highlights Grande’s complexion in the best way possible! 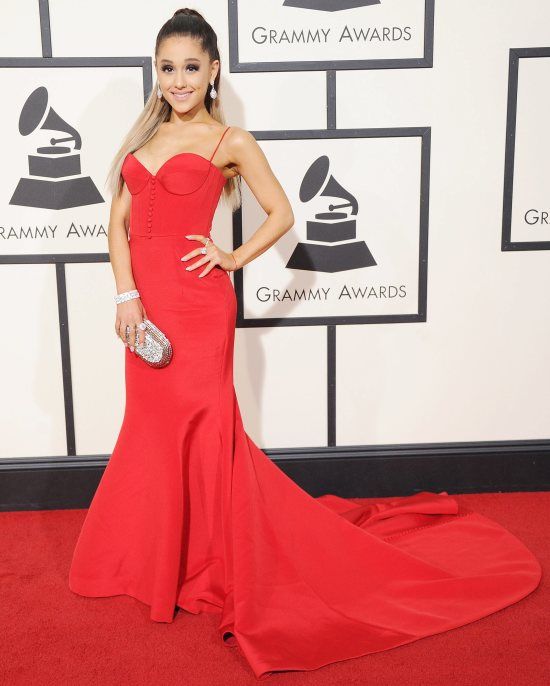 We absolutely love when stars opt for two-piece sets on the red carpet, but this particular one Ariana Grande wore to the 2016 MTV Video Music Awards, unfortunately, wasn’t the best one we’ve seen. The trousers seemed a little too long and overwhelmed her body, while the lace crop top felt mismatched with the formal pants. 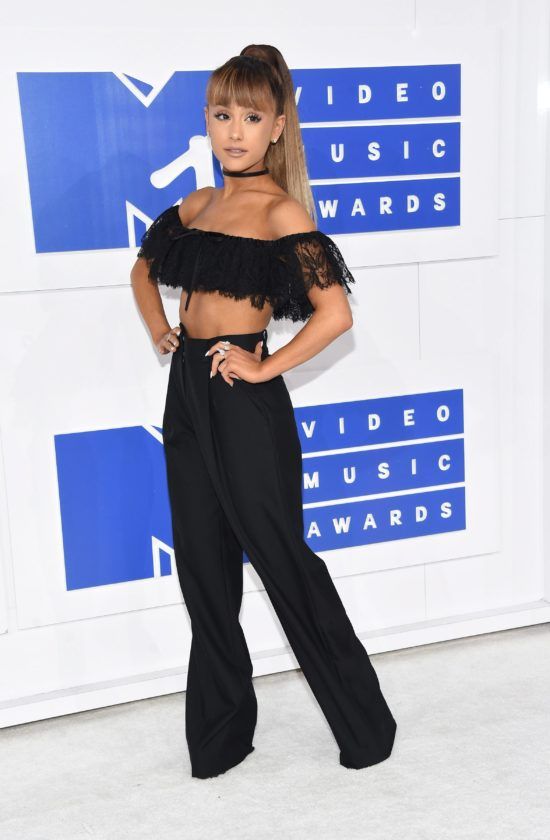 On the other hand, Ariana Grande absolutely nailed this two-piece set at the American Music Awards in 2016. We love the combination of the sultry black lace top with the crisp white trousers which made for the perfect sophisticated yet evening-appropriate look. 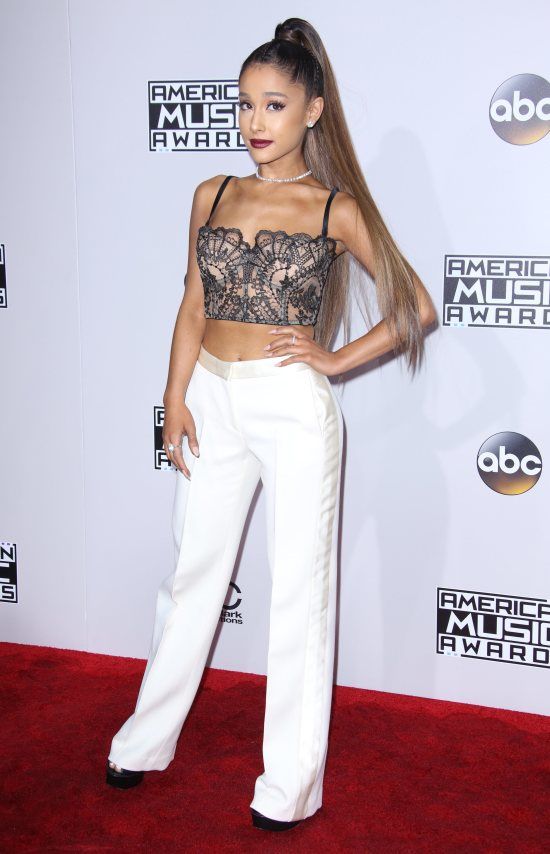 We absolutely love Ariana Grande’s style in the past few years and it feels like she’s really found a signature look that works for her which often consists of over-the-knee boots and a minidress. Typically we find this style super flattering on her, but we have to admit we felt like she slightly missed the mark with it at the 2018 Billboard Music Awards. 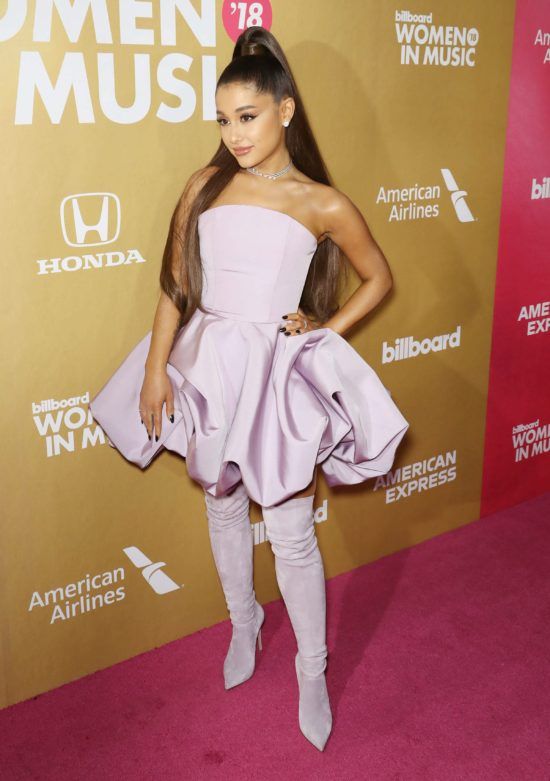 In 2013, Ariana Grande stepped out with an award in hand at the American Music Awards. Her look for the event was a floor-length red sequin dress that definitely made heads turn. We absolutely love the glitzy but sleek style of this gown! 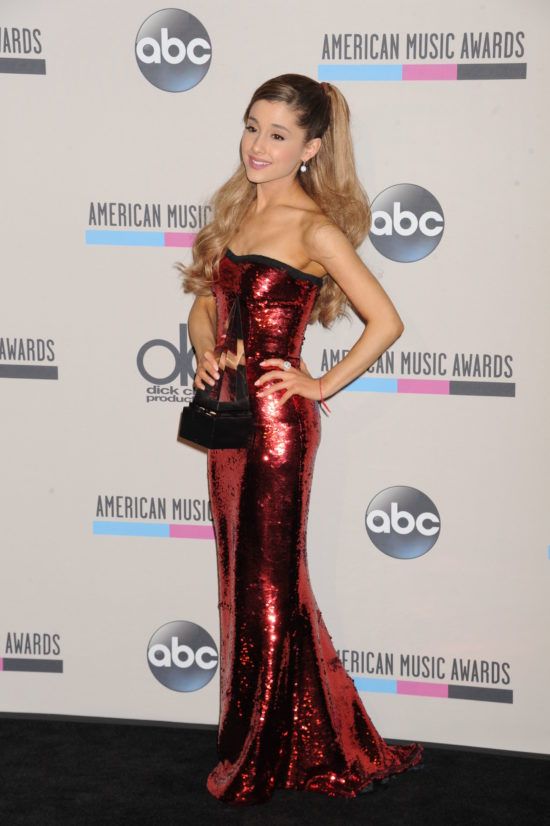 Ariana’s 2018 MTV awards look was a disappointing miss. We love the metallic silver minidress but the gunmetal glitter boots seemed to detract from it and overwhelmed the look. We would have much preferred a sandal or shorter boot with this flashy dress.

Of all of Ariana’s looks, her absolute best has to be the work of art she wore to the 2018 Met Gala. She nailed the theme in every sense because the dramatic number was inspired by Michaelangelo’s The Last Judgement painting. The gown was an exact replica of the artwork and even featured the highly pristine and intricate Sistine Chapel on it. Aside from the intense detail involved in the dress, the purple and bronze colors worked flawlessly with Grande’s olive-toned skin. 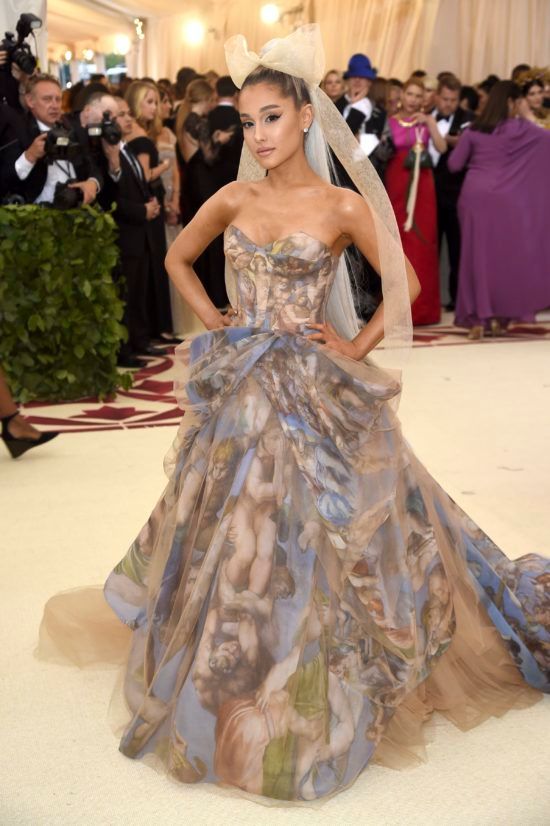 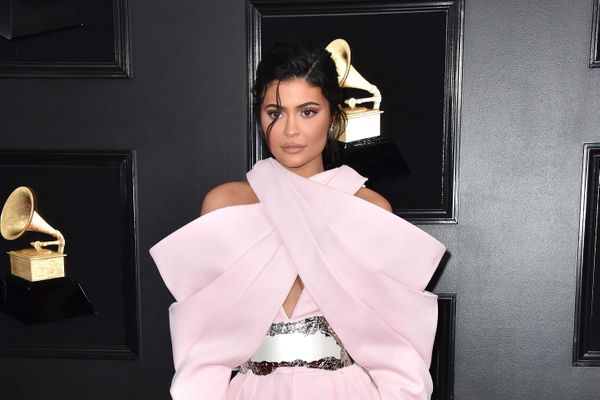