On Wednesday, November 2, Bridgestone Arena in Nashville, Tennesse was the site of a huge country music celebration for the 50th Country Music Association Awards. Hosted once again by Brad Paisley and Carrie Underwood, audiences were treated to many spectacular performances from their favorite stars, and of course it all started with the red carpet arrivals. Unfortunately for some stars they were turning heads for all the wrong reasons! All of these women are gorgeous, and they did not do themselves justice with their fashion choices for the night. Here are the seven worst dressed stars from the 2016 CMA Awards:

It is extremely difficult to speak negatively when it comes to anything about Faith Hill, but it seems she could have just done so much better with her style choices for the night. The stunning singer opted for a two piece ensemble with a shiny black skirt, and full sleeved grey top which may not have been too bad together, but the awkward skirt around the top of the skirt threw the whole look off. Hill also sparked concern with her face which was so thin she was almost unrecognizable.

As usual, Little Big Town’s Kimberly Schlapman’s hair and makeup were amazing, but her red carpet dress left a little more to be desired. The one shoulder floor-length navy Gauri & Nainika gown actually would have been really nice it didn’t have the enormous rosette at the waist.

Little Big Town won big as the winners of the Vocal Group of the Year, but did not do so well on the red carpet as Karen Fairchild also failed to impress. The singer opted for a teal Hamel gown, which fit her body perfectly, but it all went wrong with the overdone fringe which included a fringed capelet, and long fringe hem line.

Kacey Musgraves definitely made a statement with her tulle Christian Siriano gown, but not necessarily a good one. While some were in favor of the layers of poof dress, others thought the singer looked too much like a tiered wedding cake, and fans know she could do much better with her style choices.

While the former winner of The Voice is stunning and can pull just about anything off, there was just something wrong with her entire look that did not seem finished. Her daring burgundy gown, which was obviously meant to look sexy, looked as though it had been thrown together so haphazardly that it was missing material. The one thing that really made the look one of the worst was the random addition of a nude outline on the right side, which made the dress look dishevelled.

Nicole Kidman and Keith Urban are one of country music’s most beloved couples, but the stunning actress sure has disappointed in her red carpet styles lately. Kidman’s rose-colored chiffon gown had a lot of odd details, none of which exactly went together well. From the ruffled shoulders to the statement buttons also adorned with ruffles, the dress looked rather frumpy and matronly, which are two words never used to describe Kidman.

Elle King stunned country music fans when she teamed up with Dierks Bentley for the hit “Different for Girls” which won the duo the award for Musical Event of the Year, but many are what was different for King was her red carpet fashion choice. The pop singer opted for a very strange and somewhat ridiculous matador type outfit which included not just fringe but full fringe pants. 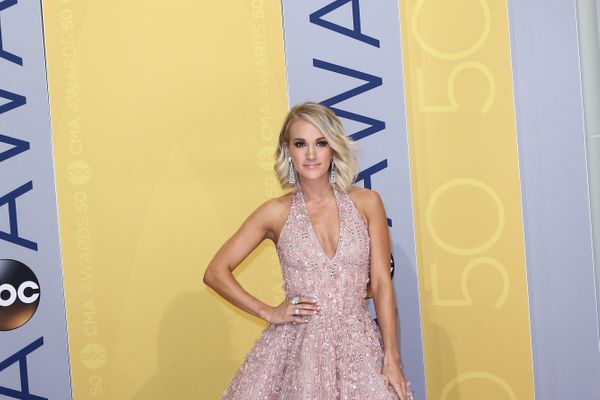