On Wednesday, June 7 country music and country television’s biggest stars came together at the Music City Center in Nashville, Tennessee, for the 2017 CMT Music Awards! The night proved to be big for some stars as they were honored with numerous awards, but it all started with red carpet arrivals where, unfortunately, some really failed to impress. Fashion really was all over the place for this awards show and there were more questionable looks than good ones, so here are the 8 worst dressed stars at the 2017 CMT Music Awards:

After many awards show it seems Sam Hunt has no interest in being on best dressed lists anyway. While the “Body Like a Back Road” singer is undoubtedly very handsome, his good looks couldn’t help him pull off the all black outfit he chose for his arrival. Hunt opted for a shiny silk-like black shirt, black pants and black shoes, none of which were the same shade of black and made the star look more like an usher than an attendee.

Much like Sam Hunt, at recent events Nicole Kidman has decided to take fashion risks, unfortunately many of them haven’t paid off. The gorgeous leading lady and wife of country star Keith Urban, disappointed in a black slip dress with a detailed lace overlay. Kidman looked more ready for a funeral or Halloween than an awards show in June.

Anderson East was lucky all eyes were on his hot date Miranda Lambert because it detracted slightly from his rather awful suit choice. The 28-year-old singer opted for a brown pant and jacket look with black shoes and black shirt, and it was simply not flattering at all. Any other color would have been fine, but the brown was much too ’70s.

Honestly, it was kind of strange to see Katherine Heigl at the CMT Music Awards in the first place, but her outfit was even more strange. Even the gorgeous actress’s stunning hair and makeup couldn’t help us get past the awful orange/red frock dress she chose for the event. The color alone was bad enough but there was far too much fabric that seemed put together in a very haphazard way.

With four different personalities making up the extremely talented group Little Big Town, it is not surprising their fashion choices are all very different. The problem is all of their style choices for the CMT Music Awards were pretty bad. Phillip Sweet opted for ripped black jeans, a black and white striped shirt and white jacket that looked more grunge band appropriate. Kimberly Schlapman chose an ill-fitted shiny floor-length dress with a multi layered skirt and Karen Fairchild really turned heads for all the wrong reasons. She donned a rather pretty, but shapeless, white lace dress, but ruined it with awful opened toed, thigh-high, laced up boots. Meanwhile Jimi Westbrook donned an odd red jacket with strange detailing.

One of country’s newest stars Lauren Alaina was a winner with her award for Breakthrough Video of the Year for her single “Road Less Traveled,” but her fashion choice wasn’t as successful. While her makeup was fantastic, her Rubin Singer cocktail dress unfortunately was not. The multi-colored dress might have been not so bad if did not have the huge shoulder ruffle, throwing the entire balance off. In the end, the dress looked like a one-time bedspread made into a dress.

The guys have Florida Georgia Line have donned a wide array of styles over the years, but these ones were just not their best. Brian Kelley attempted to dress for the event in an off-white suit, but the big hat and Pippi Longstocking pigtails did nothing for him. Meanwhile, father-to-be Tyler Hubbard embraced his new role and went right for the grandpa fashion with slacks, and a soft yellow sweater.

RaeLynn has always liked to keep her look young and edgy, but it seems she has a hard time mixing those qualities with red carpet appropriate. The talented singer chose a very strange high-neck floral mini that sounds so much more simple than it is! The dress featured long sleeves, a ruffled cross-shoulder, and a completely different left half than the right over the top. There is way too much to look at with this dress, and none of it is good — not to mention, it appears as though the dress simply ran out of material so another was added to it for the finish. 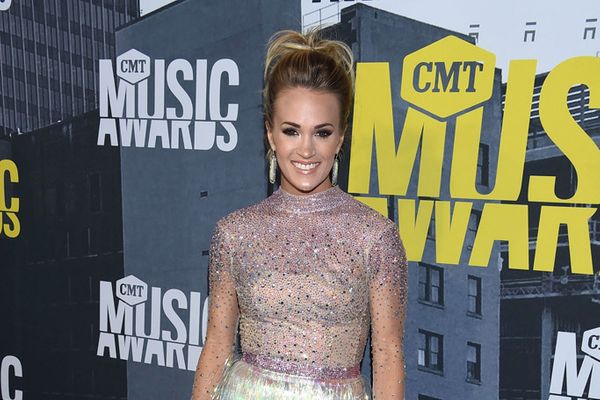