The Country Music Awards definitely have a reputation for shocking and sometimes downright questionable fashion moments! We’ve seen glitter where glitter should never be and fringe in all the wrong places. Although this year had quite a few gorgeous gowns, there were inevitably a few that fell short of our expectations as well. Follow along for the 10 worst dressed stars that left us feeling quite disappointed after last night’s CMAs:

LoCash stepped out looking like quite the wreck last night with their interesting choice of red carpet attire. Chris Lucas dressed up in a silk blue blazer with navy lapels which he paired with a strange grey vest underneath. To add even more confusion to his look, he rocked a ball cap and tennis shoes which seemed inappropriate for a red carpet event. His partner, Preston Brust, had some interesting attire of his own. The country star rocked a wide-brimmed white top hat with a bold and tacky cheetah print blazer.

Karen Fairchild definitely had a questionable wardrobe choice last night with her emerald green long sleeve gown. Although the color and shape aren’t the worst, there just seemed to be too much fabric and the dress overwhelmed her figure rather than flatter it. The texture, balloon sleeves and overbearing emerald jewelry just seemed too over the top and we would have much preferred something more subtle.

The men of Midland definitely had some awkward style moments on the red carpet at this year’s Country Music Awards! Mark Wystrach wore a strange brown leather jacket which was unsuitably belted at the waist which he paired with a wide-brimmed hat. Cameron Duddy wore an unflattering suede brown coat paired with a seemingly casual denim top. Jess Carson was luckily the best of the group and wore a black suit and simple cowboy hat. Unfortunately, as a group these men definitely came off overbearing and tacky.

Ruby Rose took sparkle to a whole other level at this year’s CMA’s and we’re not totally convinced this was the best choice for her. There’s definitely a way to pull off a full sequin gown, but the high-metallic shine left Rose looking more like a distracting disco ball. We would have much preferred to see her in something with proportionate sequin embellishments rather than covering the entire dress.

Fashion blogger Mary Lawless Lee is an obvious beauty, there is no denying that, but her outfit admittedly wasn’t the best. We love how she styled the pantsuit by wearing it open to reveal a bralette top, but the pattern was just too distracting. The mix of the yellow-green shade with hints of brown felt awkward and too risky. Despite this, we love the way she styled her hair and the tangerine color she rocked on her lips.

The always-stunning Karlie Kloss had a rare fashion miss last night! The cut and color of the dress were definitely on point but we’re not totally convinced about the crochet-style detailing along the bustier. The entire look came off a little too casual and we would have much preferred if she had opted for something more elevated or at least swept her hair into a more formal updo.

Kellie Picker is usually a fashion star on the red carpet, which is why we were extra disappointed to see her step out in this feathered garment. The feathers were placed in all the right spots, and even the pop of green wasn’t the worst, but the cut of the dress was something we couldn’t overlook. The gown hit her at an awkward knee length which made her appear shorter and didn’t flatter her body as nicely than if it had been shorter. She almost had it, but then she didn’t!

Pink took Princess-style dresses to the next level last night with her foofy Cinderella-inspired gown last night! We have grown to love Pink as the edgy and boundary-breaking woman she is which is why we were left disappointed when she stepped out in a stereotypical ballroom style look. The pale pink dress was covered in tulle with dreamy cap sleeves but just felt out of place on her. Despite this, how adorable did her daughter look in this equally as Princessy-looking gown?

Maren Morris’ dress just simply had way too much going on. From the ruffles to the grey embellishment, to the awkward length to the strange hole detailing. This dress just didn’t flatter her shape and she looked quite uncomfortable and restricted wearing it. We would have much preferred to see Morris in something a little more simple!

There is a time and place for graphic tees, and the CMAs is so obviously not it! Although we appreciate stars that can make a statement, a formal event like this was not the most appropriate place to wear a tank top and pencil skirt combo. Amanda Shires and Carly Bueno stepped out wearing pink tee’s with the slogan “Mama wants to change the Nashville sound” and while their message was commendable, their choice of attire was not. 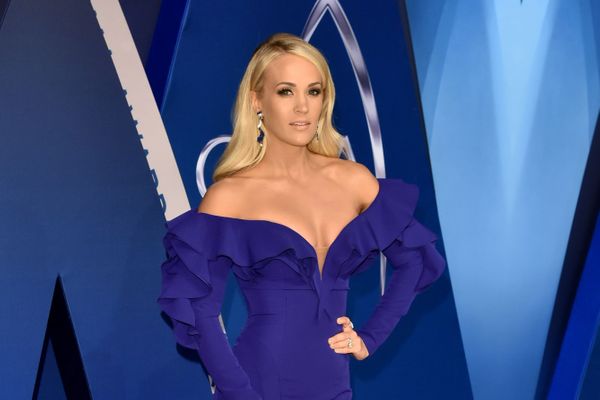