When it comes to the MTV VMAs, the fashion can be on point or totally out there. Last night, all the stars came out in full force and, while some of them looked fantastic, there were some that totally missed the mark. We’re ranking the celebrity looks from the 2019 MTV VMAs red carpet:

FKA Twigs went for a dramatic look at the VMAs and it was a total hit. She wore this custom Ed Marler design, which included a crystal chainmail dress with a Victorian natural pearl hem, as well as an aquamarine chiffon sash and a silk taffeta train.

Blac Chyna was all decked out in this feathery Pepto-Bismol pink dress on the red carpet. While the dress seems to have a fun sort of vibe, it also kind looks like a mat that one would have in the bathroom and, for that reason, it fails.

The Love & Hip Hop: Miami star arrived wearing this sheer, paneled halter dress by Sherry Haute Couture. The colors really suited Shay Johnson and the cut of the dress really showed off her figure. This was a definite winner!

Hayley Kiyoko’s look at the MTV VMAs had potential. While the top part looked as though it was properly fitted, the bottoms did not. They look several sizes too big. It was a risky move and it did not end up paying off.

The Brazilian model wore a sheer green form-fitting dress with long sleeves over a green bodysuit to the 2019 MTV VMAs. It was a pretty sexy look, which she completed with rhinestone-covered stilettos and a messy, wet hairstyle.

For her very first MTV VMA red carpet, Megan Thee Stallion rocked a stud-covered jacket with matching bra and boots. While we definitely give her credit for being so bold, her outfit wasn’t one of the better looks on the red carpet that day. It was a little too much skin, leather and silver studs.

Hailee Steinfeld rocked red at the 2019 MTV VMAs. The sheer Aadnevik number was sheer, featured thigh-high slits and gorgeous floral details. She completed the look with red stilettos, a matching red lip, and long waves.  The result was a stunning VMA look.

The gold number that Keltie Knight was wearing at the VMAs was not one of the best looks of the night. Unfortunately, the material didn’t look as though it was of especially high quality and the design itself looked a bit messy.

Musician Rosalia went for a sophisticated red carpet look at the 2019 MTV VMAs. She wore this custom-made Burberry black satin fringed dress, which featured a corset and crystals, and topped it off with a pair of chandelier earrings.

Normani’s two-piece ensemble was just a little too revealing – even for the VMAs. Maybe if the dress covered her midsection it would have resulted in a better look but, as it was, it just wasn’t one of the better outfits.

LeToya Luckett – one of the original members of Destiny’s Child – hit the red carpet at the 2019 MTV VMAs in this gorgeous black and grey sequined cocktail dress.  It was such a bold look and she rocked it like a pro.

Charm La’Donna was gorgeous in gold at the MTV VMAs. The dress seemed to shine with its sequins and so did the choreographer/dancer. She opted for simple accessories, including a pair of gold earrings and a black pair of heels.

Chanel West Coast looked like she belonged in the 1980s with this bronze Zebra print dress and her big hair — and not in a good way. It was a risky move going for this particular pattern and this hairstyle and it just didn’t end up paying off.

Whitney Port looked like a supermodel in this sequinned minidress. It was such a simple look, but it really highlighted her legs, which seemed to go on for days. Her black accessories just added to the simplicity of it all.

While we liked some things about Jamie-Lynn Sigler’s VMAs outfit, overall, it just wasn’t a flawless look. The top seemed to fit really well, but the pants seemed as though they were not properly fitted, which looked kind of sloppy.

Lizzo went for a dramatic look on the red carpet with this red strapless sequinned gown, which she paired with a red feather boa, a dangling diamond necklace and a ’60s updo. It gave us major Old Hollywood vibes!

While Queen Latifah’s orange suit really complements her skin, there was something about the pants, which prevented the look from being a complete success. Maybe if there wasn’t a fringe at the very bottom, it would have looked better.

Ilfenesh Hadera looked stunning at the 2019 MTV VMAs. She wore this metallic dress, which hugged her slim physique, and accessorized with silver earrings and a pair of silver pumps. It was a great look and she definitely stood out.

Tana Mongeau went for an attention-grabbing outfit for the red carpet. It looked like she was trying to pay homage to Britney Spears with her patterned mini dress and matching thigh-high boots and the snake she was carrying around her waist. Unfortunately, it was a little tacky.

Nessa looked like a million bucks on the red carpet at the VMAs. The curvy star donned this nude, ruched dress that fit her like a glove, and then accessorized with a statement necklace, a gold cuff on her wrist and a simple pair of heels.

Alison Brie’s red carpet dress for the VMAs was a bit of a disaster. While she was clearly trying to go for a sexy look, she definitely missed the mark. The plunging neckline was way too much and left nothing to the imagination. Coupled with the almost sheer skirt, it was just too much.

The Swedish singer made quite the entrance on the MTV VMAs red carpet in this light pink off-the-shoulder Giambattista Valli Haute Couture dress, which featured ruffles and a train. She accessorized with strappy heels and Bulgari jewels.

While Snooki’s crop top looks super cute with her black pants, the rest of her outfit was not on point. The jacket didn’t fit with the ensemble and looked like something she had borrowed from her husband. Also, the shoes seemed to stick out like a sore thumb.

The Jersey Shore store looked stunning at the MTV VMAs. She rocked this yellow dress, which featured a one-shoulder design and a thigh-high slit, with cheetah print heels. She also walked the red carpet with her new boyfriend, Zack Clayton Carpinello.

The “Nightmare” singer’s dress wasn’t the worst thing that we saw on the red carpet. However, we felt that it was just a little too revealing. Maybe if the sheer orange part had functioned more like a dress it would have looked better. But it didn’t.

Bebe Rexha looked gorgeous at the VMAs in this metallic Christian Siriano dress, which featured some daring cutouts. Apparently, it was a last minute choice! “I picked out this VMA look two hours ago,” she told Access Hollywood. “I’m wearing Christian Siriano, he showed up two hours ago and literally made this.”

“The Boy Is Mine” singer wore this bold Libertine Spring 2019 design on the red carpet. While we appreciate that the VMAs are all about taking big risks with fashion, the pattern on this dress is just too busy and the red beret just doesn’t quite match.

Keke Palmer was easily one of the best dressed stars at the 2019 MTV VMAs. She wore this gold sequinned gown, which looked nothing short of amazing on her. It hugged her curves in all of the right places and made her look like a queen.

Heidi Klum donned this short, black sequinned dress at the 2019 MTV VMAs. While we love sequins, this dress was all wrong. It didn’t seem to fit particularly well and it had a weird piece of fabric hanging down the front, which did not look good at all.

The most anticipated guest of the evening was without a doubt Taylor Swift and she made sure to wear a really unique outfit. On the red carpet, she rocked this multi-colored blazer dress with black over-the-knee, which seemed to be on point with her recent album debut.

Bella Hadid is gorgeous — there is no doubt about that. However, the nude two-piece outfit with straps that she rocked at the 2019 MTV VMAs wasn’t the best choice. Maybe if it had been just a form-fitting dress with the same pattern it would have been better. It is hard to say.

While others went for bold looks on the MTV VMAs red carpet, Gigi Hadid went for a neutral one. She rocked this nude corset and tan pants by Tom Ford. It was definitely one of the better looks of the evening, and the whole ensemble really flattered her supermodel figure.

Ava Max took a big risk with this ensemble. It looked like she was trying to go for a superhero look, but it doesn’t quite work. Kudos to her for her bravery, but even for the MTV VMAs, this look doesn’t work. It looks like something that belongs at Comic-Con.

The “Señorita” singer walked the red carpet for the 2019 MTV VMAs in this gorgeous white gown. In a sea of bold outfits, this particular dress definitely stood out for all the right reasons, which is why she ranks at number one on our list of the best and worst dressed. 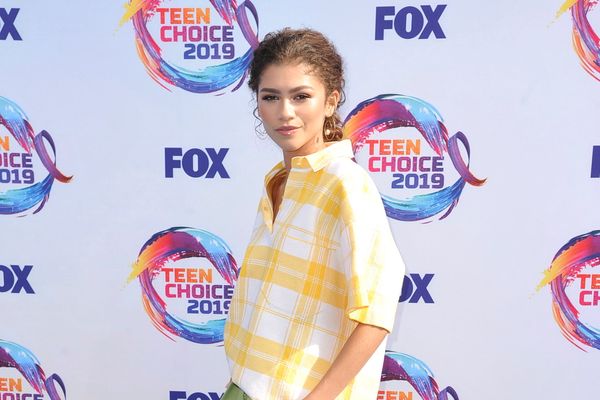