This year’s MTV Video Music Awards hosted by Katy Perry definitely had it’s fair share of ups and downs in the world of Hollywood. The annual event has previously given way to many unforgettable moments such as Miley Cyrus twerking to “Blurred Lines” or Madonna kissing Christina Aguilera and Britney Spears, and this year was no different — especially when it came to fashion! Whether it was Farrah Abraham’s questionably high metallic boots or Nikki Minaj’s pink latex creation, follow along for the 5 worst dressed celebs from the star-studded evening at the MTV VMA’s:

Teen Mom‘s Farrah Abraham definitely had a questionable choice in attire last night! She kept the pieces minimal and clean by wearing a simple cap-sleeve fitted blouse and white skinny jeans to match, but the real problem we had was her super high metallic boots. The  futuristic thigh-high boots were a little too space-inspired and resembling aluminum foil to be a respectable fashion moment. The star stuck with the intergalactic theme with a slicked back red ponytail and dotted her cheekbones in chunky glitter. The only redeemable factor we can give the star is that her daughter’s matching ensemble was the adorable accessory to distract from her over-the-top mother!

In yet another questionable boot moment, Noah Cyrus stepped out rocking this over-sized hoodie and over-the-knee ensemble. We are on board for this street style trend when we’ve seen it on Gigi Hadid and Kendall Jenner strutting the streets of New York city, but Noah definitely missed the mark by wearing a casual look like this to a red carpet event. She looked sloppy and informal and we would have preferred to see her in a look a little more elevated and polished.

The pajama-inspired trend has been everywhere this year and although this trend is risky to pull off, we’ve surprisingly seen fashionistas like Olivia Palermo and Selena Gomez wear it flawlessly. Unfortunately Sophie Beem’s attempt at this trend with a silky, colorful ensemble was a definite red carpet miss. The rainbow colors were tacky rather than muted and understated as we’ve seen other celebrities opt for when they try this trend. The cropped top bared way too much skin and added to the overall unpleasantness of this particular worst-dressed look.

Nicki Minaj has rarely been conventional when it comes to fashion despite her recent attempts to claim her theatrical image is behind her. The star stepped out rocking this curve-hugging pink creation that resembled a piece of bubblegum being wrapped around her body in the most unflattering way possible. The endless memes created mocking her traumatic pink camel-toe made this fashion look more of a joke than anything. Try again, Nicki Minaj!

In all of the worst fashion moments from last night, Kesha undoubtedly stole the cake with this over-sized ruffled dress. The expression on Kesha’s face says it all — this look is uncomfortable, awkward and highly questionable. The dress is much too large for Kesha’s frame and brings attention to her body in all the wrong ways. We would have much preferred her in something more slim and figure-flattering. Although we love Kesha’s new single “Praying,” we can’t say the same for her unfortunate choice of dress last night! 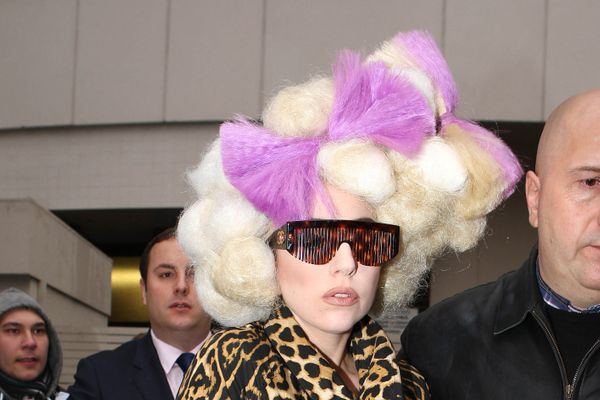 The 7 Most Outrageous Celebrity Wigs