The Most Controversial Royal Fashion Wedding Moments Ever

It’s no surprise that the Royal family has quite a few rules of etiquette that must be followed, especially comes to their wardrobe. The one day that’s most important of all when it comes to royal attire is a royal wedding day. Royal weddings are always an affair to remember and are often even televised for the entire world to view. While it’s impressive that so many are interested and supportive, this also creates quite a bit of pressure for everything to perfect. Most of the time, these worldwide affairs go off without a hitch, but sometimes there have been a few wardrobe mishaps along the way. Follow along for some of the most controversial royal wedding fashion moments of all time:

It’s wedding tradition for brides to wear a veil on their big day and while they were quite modern brides, both Kate Middleton and Meghan Markle followed this protocal. Princess Eugenie, however, decided to pass on a veil, which was seen as quite controversial. This decision was because she wanted the low back of her dress and her scar from scoliosis surgery to be on full display. “I think you can change the way beauty is, and you can show people your scars and I think it’s really special to stand up for that,” she shared of her decision.

While it’s standard now for brides to wear white dresses on their big day, surprisingly, this wasn’t always the case! When Queen Victoria married Prince Albert in 1840, many were confused about her decision to wear a cream gown covered in white lace. At the time, it was customary for brides to wear rich reds or purples covered in gold embroidery and colorful gemstones. Since this was the standard, obviously Queen Victoria’s white dress caused quite a bit of controversy at the time, but in retrospect, it changed the course of history by being a driving factor behind the white wedding dress tradition.

In 1937, the romance of Wallis Warfield, an American divorcee, and Prince Edward VIII caused a constitutional crisis. At the time, a royal marrying a divorcee was highly frowned upon and actually led to Edward abdicating the throne. The two went on to marry and many believe her reserved wedding attire was a subtle nod to the disapproving royal family. She wore a light blue column dress, a fitted jacket, a hat in the shape of a halo and a bracelet of crosses that marked every milestone in her relationship with the Prince.

While many likely believe that the Royal family have always had huge brackets of disposable income, that doesn’t seem to have been the case for Queen Elizabeth! She married Prince Philip just two years after the conclusion of World War II, which was a time where the country was still recovering and rationing. This limited Queen Elizabeth when designing her dress because she too was on a rationing book. She was gifted 200 extra coupons to design her dress, which led to many people attempting to send her extra coupons in the mail in fear she might not have enough.

Aside from her dress, another reason for wedding controversy surrounding Queen Elizabeth was her crown. On the morning of the wedding, her hairstylist attempted to secure the century-old antique tiara onto her head but it snapped under the pressure. Luckily, a jeweler was in attendance and took the tiara to his workshop to be repaired. The mission was successful and the tiara was returned to the bride completely restored aside from a slightly noticeable gap between the central fringe and the one to its right.

One of the most anticipated moments of a royal wedding is when the bride appears in her gown and walks down the aisle. Typically royal brides are quite extravagant with their choice of bridal gown, but Princess Margaret was an exception. She walked down the aisle in a classic gown with minimal embellishment that went down as “the simplest royal wedding gown in history.”

Princess Diana paved the way for the Royal family to change their stuffy ways and become more approachable and relatable, even when it came to her clothing! Typically it was expected for Royal brides to opt for British designer brands during public engagements, but Princess Diana broke this tradition when she stepped out with Prince Charles to announce their engagement. Rather than something designer, Diana opted for an off-the-rack look from the Harrod’s department store.

Princess Diana continued to bring controversy when it came to her royal wardrobe, even on her big day. On the day of her wedding, she allegedly spilled some of her perfume down the front of the dress while she was getting ready causing an irreversible stain. Luckily, she was able to tuck in the front and hide it so no one would notice. She also carried a bouquet of dramatic flowers in front of her which helped to further hide the problem.

Cousins of Prince William, Princess Beatrice and her sister Eugenie are known for their dramatic tastes in fashion. Their looks are often quite extravagant for even simple engagements, which means when it comes to a royal wedding, these two go all out. While it’s normal for guests to attend a wedding wearing a creative fascinator, many deemed this hat worn by Princess Beatrice to Kate & William’s wedding as a little too over the top.

No one could possibly forget the sleek maid-of-honor dress worn by Pippa Middleton on the day of Kate & William’s royal wedding. Rather than fixating on Kate’s angelic walk down the aisle, many were ogling at Pippa’s backside in the body-skimming maid-of-honor dress. The sleek dress stirred quite a bit of controversy, to say the least, and even Justin Timberlake felt the need to comment on Twitter!

Kate Middleton looked absolutely ethereal on her wedding day where she walked down the aisle to marry Prince William wearing a lace McQueen creation. While the dress was obviously stunning, it didn’t come cheap! Allegedly the gown was the fifth most expensive in the world and clocked in at around $322,000. The hefty price tag stirred quite a bit of backlash with the British nation and taxpayers.

Typically it’s against wedding etiquette to wear white, or even a shade somewhat close to white, as a guest attending a wedding. The Royal family, however, seems to do things differently! When Kate Middleton stepped out at Prince Harry and Meghan Markle’s wedding wearing a cream suit-dress, she made headlines for her poor etiquette. To give an even further reason for people to buzz, the suit-dress was a repeat that she had been spotted wearing on multiple occasions previously.

Similar to Wallis Simpson, Meghan Markle walked down the aisle in a gown that was surprisingly quite simple for her royal wedding. Royal wedding viewers were divided about whether they loved or hated Meghan’s choice and the simplistic gown definitely stirred quite a bit of controversy. After Princess Diana and Kate Middleton’s bridal looks, the nation had become accustomed to dramatic royal wedding dresses, but Meghan Markle definitely flipped this notion on its head when she took her turn to walk down the aisle. 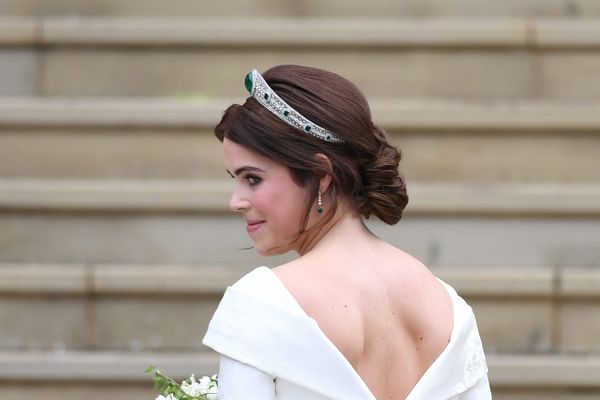