Kylie Jenner and Hailey Bieber are two of the most influential young women of the new generation, especially when it comes to fashion. While they both have their own unique sense of style, that doesn’t mean they haven’t stepped out wearing something similar occasionally. Follow along for our fashion face-off between Kylie Jenner and Hailey Bieber and be sure to vote on your favorite looks!

We absolutely love when celebs step out on the red carpet wearing a two-piece set! Back in March 2017, Hailey Bieber wore a beautiful feathered two-piece set for an event by The Hollywood Reporter. In September 2015, Kylie stepped out wearing a similar, more tame version of a two-piece set but jazzed it up with long seafoam green hair. Whose look do you prefer? Be sure to vote below! 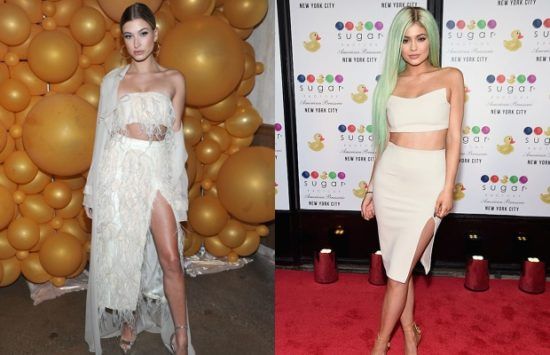 Both Hailey and Kylie clearly know the value of having a patterned midi skirt in their wardrobe! A patterned skirt is so versatile and can definitely be styled for quite a few different occasions. While Hailey has a maroon striped skirt, Kylie has a high-low gold one. Whose look do you prefer — Hailey’s or Kylie’s? 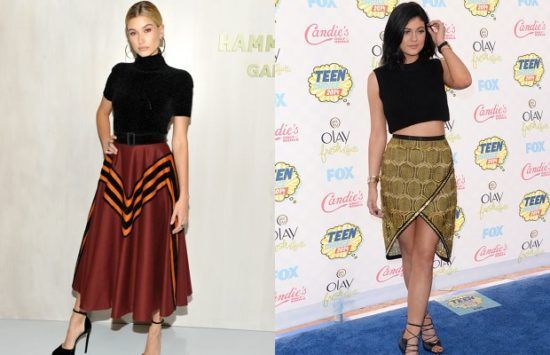 A long sleeve mini dress is both elegant and flashy and a great wardrobe staple to have in your closet for events. Hailey and Kylie have both worn them on the red carpet in the past, but whose look do you prefer? Hailey’s sparkly number or Kylie’s metallic belted look? 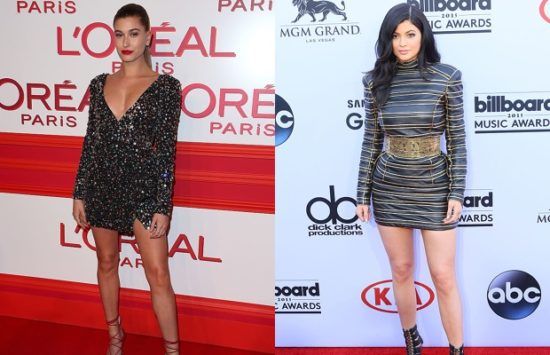 Champagne is one of the most glamorous colors you could wear on the red carpet and is a favorite of both Hailey and Kylie. Back in 2018, Hailey opted for a striking champagne number with a plunging neckline and twist detail, while Kylie opted for a sleek dress in a similar shade in 2015 with a satin belt detail. Whose champagne-colored look do you prefer? Be sure to vote below! 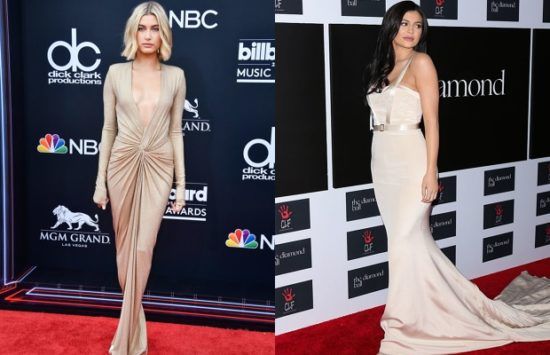 Nothing screams red carpet appeal like a little sheer dress! Both Hailey and Kylie have worn similar sheer dresses on the red carpet in the past. While Haileys featured sheer sleeves and a high neckline, Kylie’s featured cutouts along the bodice and a geometric pattern on the skirt. Whose look do you prefer? 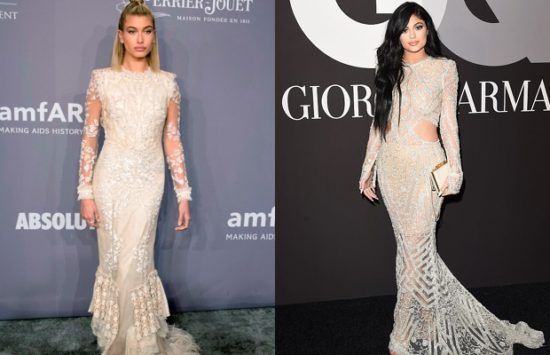 Plaid definitely has the ability to be styled in a dressy way for an event, as demonstrated both Hailey and Kylie on separate occasions! While Hailey opted for an off-the-shoulder plaid shirt belted around the waist, Kylie opted for an oversized plaid jacket that she wore over a cutout black jumpsuit. Whose plaid look do you prefer? 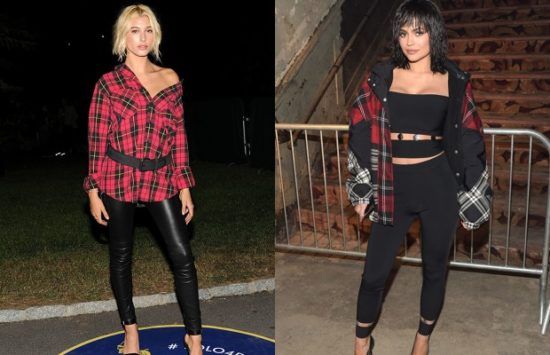 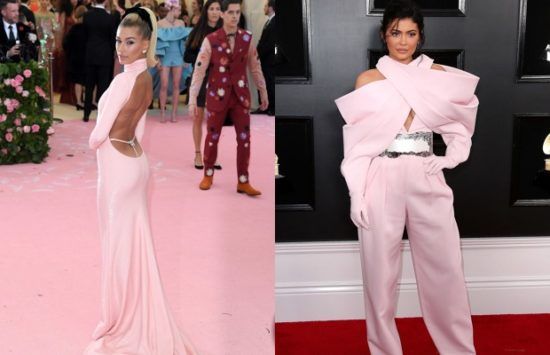 There aren’t many people who could pull off a full floor-length tulle dress, but clearly, both Hailey and Kylie can! For the 2017 Met Gala, Hailey opted for a two-piece set in a beautiful blush pink color with a tiered tulle skirt. In 2016, Kylie opted for a two-piece tulle set in a soft shade of gold. Whose tulle look do you prefer? 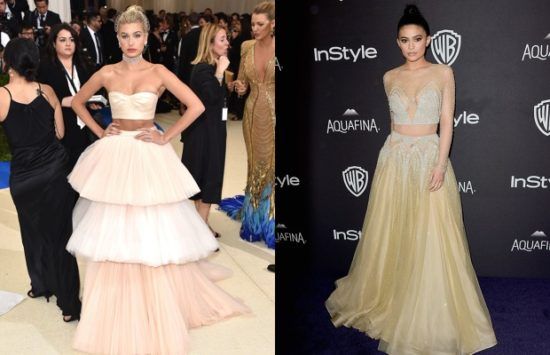 Owning a little white dress, especially for summer events and parties, is an absolute must for any girl, so it’s not surprising that both Hailey and Kylie have stepped out wearing one for various events. While Hailey opted for a long sleeve white dress with a draping detail, Kylie opted for one in a warmer shade of cream that was belted at the waist. Whose look do you prefer: Hailey’s or Kylie’s? Be sure to vote below! 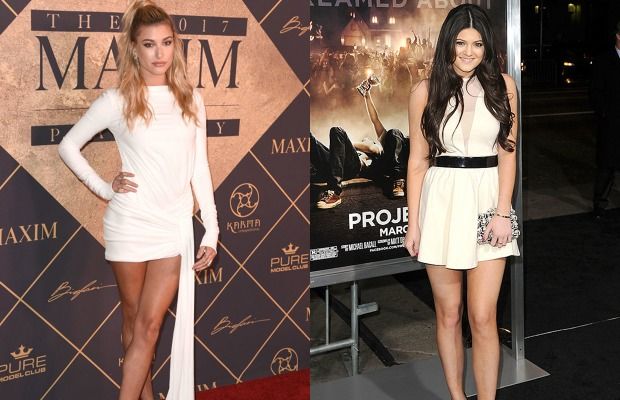 Both Hailey and Kylie clearly know how to rock a long sleeve mini dress like no other! In 2017 Hailey Baldwin attended the NBA Awards live on TNT in New York wearing this gorgeous gold and black mesh dress. Kylie wore something similar, but a little darker and more structured, when she stepped out for the Balmain x H&M launch in 2015. Whose look do you prefer? 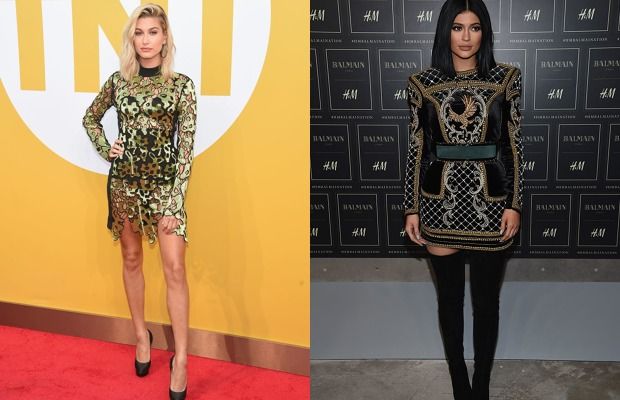 A white midi-length dress is a classy, elegant option that can be styled for any occasion, and clearly, both Hailey and Kylie understand this. While Hailey styled the trend with a fluffy clutch and matching shoes, Kylie went the minimalist route and allowed her teal hair to do all the talking. Which look do you prefer: Hailey or Kylie’s? 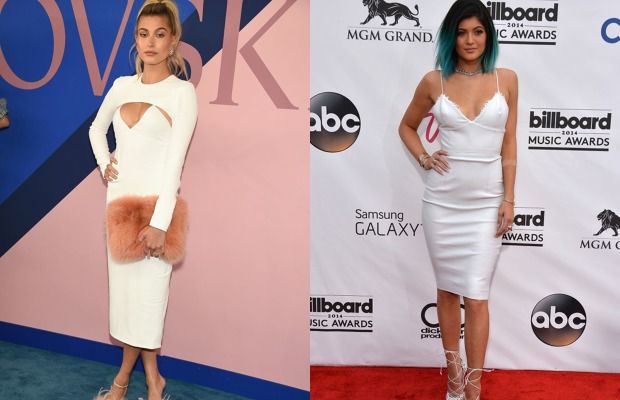 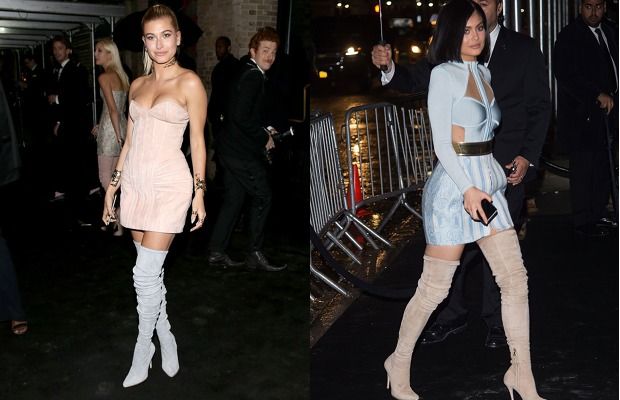 Silver is one of the most popular and glamorous colors to wear on the red carpet and both Hailey and Kylie have had their own stunning silver moments throughout their careers. We absolutely love this drapey silver look Hailey wore to the Vanity Fair party in 2018, but we also love the structured silver look Kylie wore to the Met Gala in 2016. Which silver look do you prefer? Be sure to vote below! 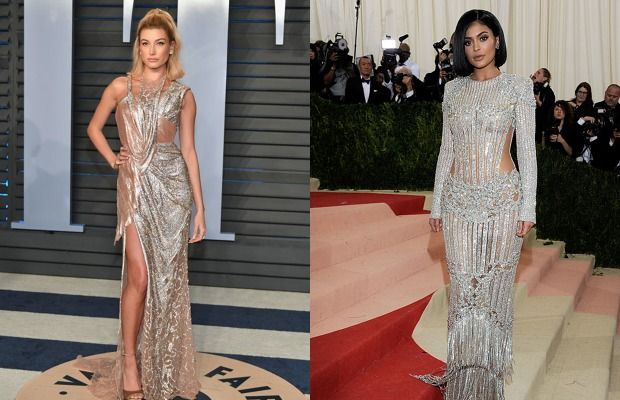 Both Hailey and Kylie definitely know how to rock a purple dress! Hailey rocked this eggplant color tulle number for an appearance at the amfAR gala in 2017, while Kylie wore a brighter shade of violet with this fringe two-piece set for a Maire-Claire event the same year. Whose purple look do you prefer? 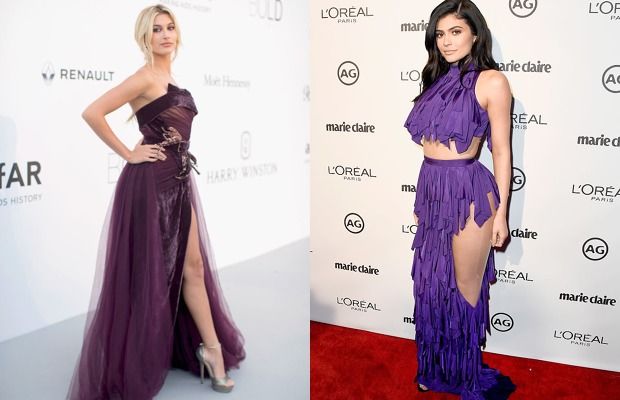 Hailey Bieber glowed in gold when she stepped out for an event with Harper’s BAZAAR in 2017 wearing a plunging neckline dress that fit her like a glove. Kylie wore a very similar gold look to a Capital One event for the 2015 ESPYS, but her look had long sleeves and a high neckline. Whose gold look do you prefer? Vote below! 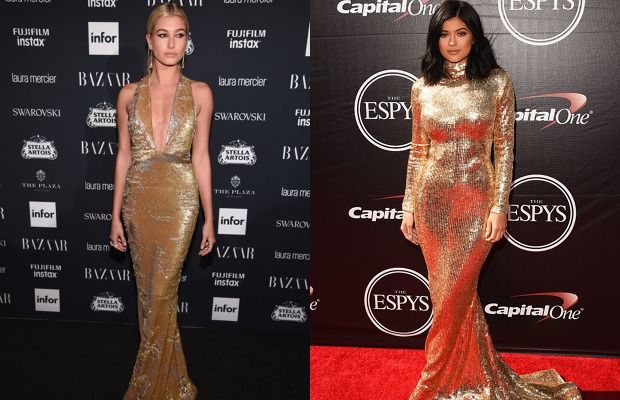 We absolutely love when celebrities opt for jumpsuits over dresses to shake things up with their red carpet attire. Hailey rocked a stunning silver sparkling jumpsuit at the 2017 MTV Music Video awards, which definitely reminded us of a look worn by Kylie in 2015 at New York Fashion Week. Which sparkling jumpsuit look do you prefer? 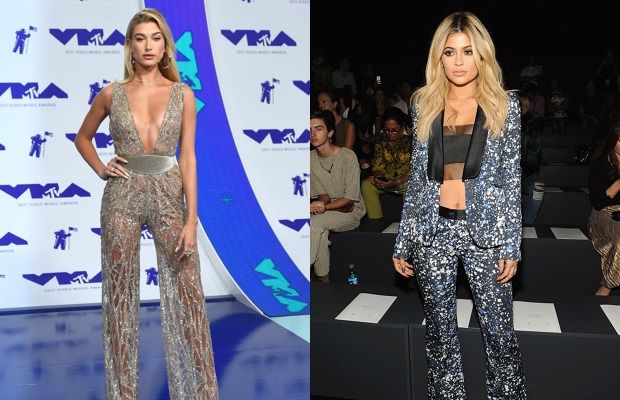 Leather is a celebrity staple in the fashion department, so it’s no surprise that both Hailey and Kylie have stepped out wearing the look from time to time. Hailey rocked a gorgeous leather dress while attending New York Fashion Week in 2015, while Kylie wore a slinky leather midi dress the same year for the American Music Awards. Which leather look do you prefer? Denim doesn’t always have to be casual, as proved by the ever-fashionable Hailey and Kylie! In July 2016, Hailey attended a GUESS event wearing a sassy denim jumpsuit that fit her like a glove. Kylie wore an all-denim look of her own in 2016 for New York Fashion Week which consisted of distressed shorts and a matching jacket. Who pulled off denim better — Hailey or Kylie? 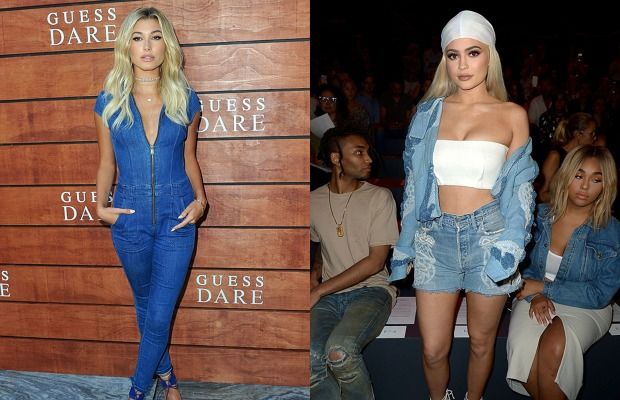 Nothing says glamour like gold fringe! For the 2018 iHeartRadio Music Awards, Hailey Bieber stepped out wearing a stunning gold fringe jumpsuit, while Kylie wore a dress quite similar to the 2017 Met Gala. Which gold fringe look do you prefer: Hailey’s or Kylie’s? 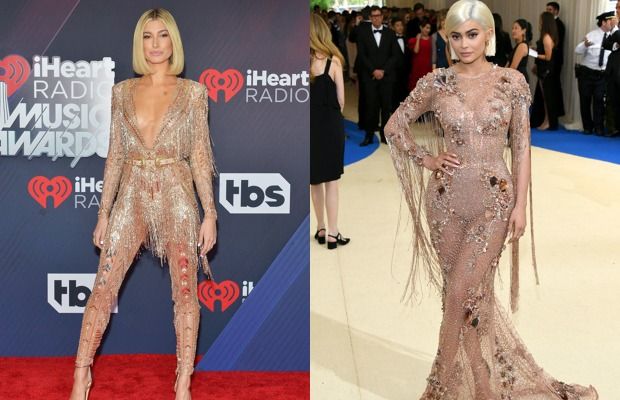 Both Hailey and Kylie are huge fans of the blazer look and have worn them out on multiple occasions. Here, Hailey is photographed at a bareMinerals event in 2018 wearing an oversized cream blazer suit. Kylie wore something quite similar to the 2018 MTV Video Music Awards, but her look was a little sharper and fitted. Which white blazer look do you prefer? Tangerine is a tough color to pull off, but Hailey and Kylie have both proved to do so fabulously! For an event in 2017, Hailey wore a full feathered dress in a rich shade of orange. In 2016, Kylie wore an orange look herself, but opted for something a little more sultry in a lighter shade of orange. Which orange dress do you prefer? There’s no better way to turn heads than to step out in a sleek red dress, especially in a luxe texture like satin. Hailey Bieber opted for a red satin look for a fashion event in 2016, while Kylie wore a similar look in 2019 for a pre-Grammys gala. Who pulled off the look better?