On the season premiere of The Bachelor last week, viewers saw the first-half of Hannah Brown’s breakdown to her ex Peter Weber about how she still questions letting him go. Then he asks her if she wants to join his season, and fans were left wondering what the outcome of their heartfelt conversation would be.

In this week’s episode, Bachelor Nation got to see the second half of their talk, which picked up from when Brown admitted that she wasn’t sure if she “made the right decision” when she sent Weber home on her season of The Bachelorette.

“I just want someone to want me as bad as I want them,” Weber said to Brown. “And you telling me that you have feelings still, and that you made mistakes, I want to hear that and I want to believe that.”

She then appeared to be upset and unsure about how to proceed with her feelings – especially while the two started to move closer and closer to each other on the couch, with him rubbing her back after she sat down in his lap. However, as the two leaned in closer to kiss, Weber pulled away from Brown quickly. “I can’t do this,” he said, before he exited the room to spend time with the other girls on his group date.

In an on-camera conversation, he admitted that he “wanted to kiss her.”

“That’s what I was feeling,” Weber admitted in his interview. “That’s what I wanted to do. I mean, it wasn’t that long ago that we broke up, so I guess it’s okay to feel this way.”

“I probably didn’t handle this the right way today,” he confessed. “I am trying to figure out what the hell my heart wants, and I’m just really scared that I’m not where I need to be for this.”

After an emotionally draining conversation with Brown, Weber then canceled the group date and instead gathered the women to let them know what happened.

“This is just really awkward. As you all saw, Hannah was here today, and I went in there and it was kind of emotional,” the reality star told them. “I don’t think she was expecting to feel that way. We just had a chat that I think we needed to have, got some stuff off our chest, and I’m really, really sorry, but I don’t think today we can continue with this group date.”

“I’m just not in the right head space right now to just have fun with you guys and enjoy this. I feel horrible because this is not fair to you at all. I still want to meet up later and reconvene and kind of gather myself and try this over again,” he added. “This is tough, because I know you guys know what I had for her was very real. … That’s not just gone away.”

The women on the group date understood Weber’s feelings but weren’t all too pleased about Brown’s presence. However, that night, he apologized again to them – and this time stated that he was going to move forward, officially ending his relationship with Hannah and putting the whole thing “in the past.” 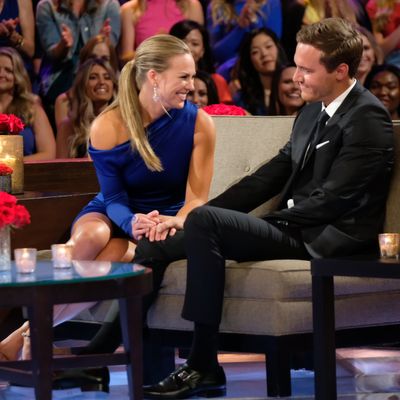