John Stamos Opens Up About Engagement To Caitlin McHugh

Ever since becoming engaged last weekend, actor John Stamos has been walking on clouds!

The handsome actor gushed about his engagement to Caitlin McHugh during an appearance at Zac Posen’s birthday fundraiser on Tuesday, October 24. “I didn’t even walk in. Did you see? I just floated from the car. I’m on cloud nine,” he joked.

The 54-year-old announced his engagement over the weekend, after dating the 31-year-old for nearly two years and opened up about making the commitment after being one of Hollywood’s most eligible bachelors for years. “I’ve been waiting for the perfect girl for over a decade and she walked into my life. I mean everybody knows that I’ve always loved family, and I wanted to have a family some day and get married again, and everyone’s like, ‘Why don’t you just do it!? Why don’t you just do it!?'”

The Fuller House star, who was previously married to Rebecca Romijn from 1998-2005, continued, “Everybody thinks it’s so easy. The hard part as me. Like I wasn’t the best me. I was ready, but no one as perfect as Caitlin — a true, pure beautiful person inside — would’ve never gone for the old me, a few years ago.”

Fans will remember Stamos was arrested for a DUI in 2015 and then checked himself into rehab for 30 days to seek treatment for substance abuse, and the actor said he had to “get back to the person he was” and “hit reset.” He explained, “Then I knew the right person would come along, especially, if I prayed and hoped. And I know my parents are up there watching, so I think they delivered an angel to me.”

Of course he couldn’t help but gush about his love, whom he proposed to at Disneyland,

“We’re a perfect balance. I’m like hyper and tense and she’s like, ‘It’s cool man. Everything’s fine.'” He added, “She’s so calm and so graceful, which I’m not either of those things. So it’s a great balance,” he adds. “And she’s just a pure, authentic beauty. Like she’s not trying to be something she isn’t. She doesn’t care about money or showbiz.” 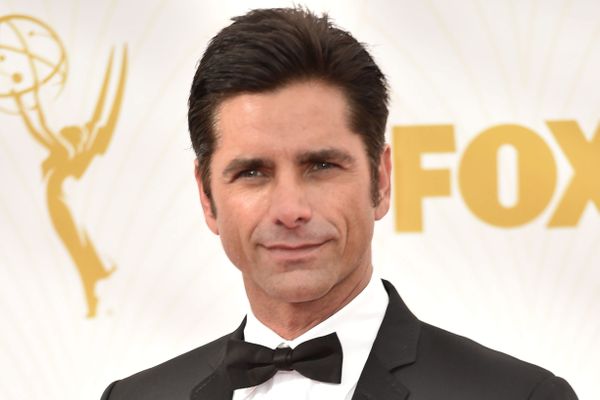