The Big Bang Theory actress Kaley Cuoco got one huge surprise and incredible gift for her 32nd birthday on November 30 — an engagement ring!

Cuoco’s longtime boyfriend, Karl Cook, proposed to the stunning star on her birthday, and even filmed her reaction to share with the world. Naturally, the actress is seen absolutely bawling with happy tears and flashing her beautiful new ring. Cuoco shared the video and added the sweet caption, ““Still crying every part of this night has been perfection just like you @mrtankcook I love you forever!” Naturally, she also added an engagement ring emoji.

While the engagement was an incredible end to the night, Cuoco documented how great of a birthday it already was leading up to it as she revealed he sent her flowers, set up a romantic candlelit dinner and gave her a one day trip to Disneyland. She captioned a photo of it, “I can’t even.”

“I am so so so happy. Thank you @nadis_diamonds for making the greatest ring I could hope for. Absolutely brilliant. Thank you thank you,” Cook wrote alongside a picture of the ring.

Cuoco and Cook have been dating since March of 2016 and they made their red carpet debut at the Longines Masters Los Angeles Gala in Long Beach, California that following September.

The actress was previously married to tennis player Ryan Sweeting, but the pair split in the fall of 2015 after 21 months of marriage.

Still crying every part of this night has been perfection just like you @mrtankcook I love you forever! 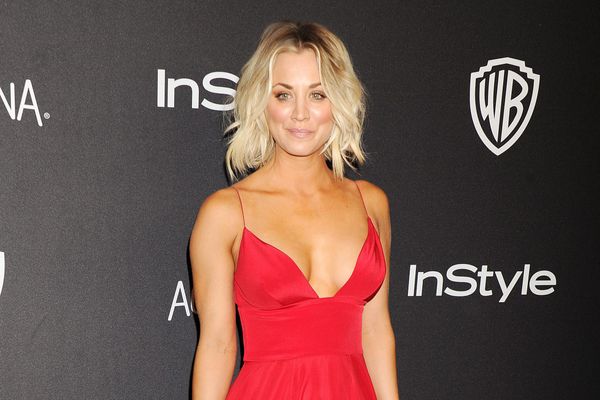