Fan favorite Teen Mom OG and former 16 & Pregnant star Maci Bookout recently talked to Fame10 and shared some exciting details on her new book “I Wasn’t Born Bulletproof: Lessons I Learned (So You Don’t Have To)” which will be released later this month on June 27. She talked about what fans can expect to see in the new book, what she’s most excited about sharing, and where she stands on moving forward with her reality TV career.

Even though “I Wasn’t Born Bulletproof” is poised as a follow up to her autobiography which documented her past as a teen mom, this new book will be much different, not only in the sense that it’s an advice book versus a memoir, but also because it offers a whole new perspective from her that is fun, inspirational and ultimately a more realistic look at who she is today as a 25-year-old teen mom, wife and mother of three.

In an exclusive interview with Fame10, Maci told us what makes this new book different from her first. “It’s definitely more of me as an adult and who I am today and not necessarily who I was at 17 or 18-years-old. That’s one of the things I’m most excited about is to have the more grown up voice, more mature and sarcastic attitude that I do have — it’s definitely portrayed more in this book,” said Maci.

When asked what made her decide to write an advice book, Maci said she really wanted to create something for all readers, not just a book for women or teen moms which is why she addresses all aspects of life that almost anyone can relate to like career, relationships, friendships, and of course, parenting and motherhood.

While talking about the book, certain chapters stand out more than others, like her chapter on friendship. “I’m really excited about that one because it’s really fun and there are a lot of stories about things my friends and I did when we were in high school and the different kinds of friends you have in your life. That chapter is really fun and something everyone will really relate to,” she said. Another thing she’s super excited to share is advice from her father! Similar to her first book which had a chapter on things she’d learned from her mother, Maci created a section in her new book within the family chapter called “Gene’s Gems” which is full of all the quirky words of wisdom he’s shared with Maci throughout her entire life.

Maci will also be sharing and addressing some of her personal struggles as a mom like Maverick’s minor health issue and the topic of mom shaming. Viewers of Teen Mom OG didn’t know at the time because it happened behind closed doors, but when Maverick was only a few months old he suffered from silent reflux. It has since cleared up, but was definitely an added strain on herself and Taylor as parents.

In addition to that, Maci’s dealt with her fair share of ‘mom shaming,’ and it’s something she’ll not only confront in the book, but offer her own advice for other moms who might be dealing with it. When asked about her experience with mom shaming, she said: “The things I’ve faced, oh Golly, they go anywhere from having a beer while we’re watching a football game on TV or letting our two dogs too close to our babies, or letting them have a pacifier. Some of the stuff is so insane and to be honest, I just really choose to not pay attention to any of it because I know I would never put my children in any sort of harm’s way.”

Her advice to other moms is based on what she does for herself which is to ignore the negativity, but also be mindful about what we say to one another. “I just want other moms to know that we are all just doing the best we can, so try not to let it bother you and to keep in mind to watch yourself because I think as moms we can sometimes give advice when it’s not necessarily being asked for. Just be mindful of what you say and don’t pay attention to people when they are mom shaming you,” she said.

In the book Maci also shares her friends experience with mom shaming. She sent text messages to all her mom friends and asked for one example of mom shaming they’d had and shared those in the book. “It’s actually insane the kinds of things people say to moms — it’s absurd. It is kind of funny, but I hope people can take something away from it. It’s one of those things where it’s like, we are all living the same thing, but in different ways. We get enough of it from everyone else, let’s not add to it. We’re in this together,” she said.

It’s obvious from watching Maci and Taylor’s relationship play out on-screen and reading about it in her first book, their marriage is rock solid. Maci credits most of that to the fact that they both “genuinely like each other.” In the most recent season of Teen Mom OG viewers watched her and Taylor seek out help, not to save their relationship, but rather as a preventative measure. She told Fame10 they’ve kept up with their marriage counselling and she’ll even be sharing what they’ve learned in her new book. “It is something we’ve kept up with and there are definitely some tips, and I guess advice on how to handle different situations in relationships, how to keep your relationship healthy and the signs to look for,” she said. “Just like in the show, if you let the little things go for too long, they’ll just build up.”

On the topic of family and potentially expanding their family, Maci confronted the rumors of adoption, and while she did admit they are true, she made it abundantly clear it won’t be happening anytime soon. “It’s something that we both always wanted to do, but I think for now, obviously our life is chaotic and crazy enough. We’re not in a place to adopt right now, but in the future we will definitely be considering it when the time is right.”

She also clarified whether she will move forward with Teen Mom OG, or if there is an expiration date on her involvement with the show. “It is definitely something that we decide, as far as Taylor and I are concerned, season by season. From our standpoint, and definitely mine, I feel like, just because the girls are getting older it doesn’t necessarily mean the struggles of being a teen mom at one point go away. As long as we can keep relating to [viewers] and give them something to learn from, then I definitely want to do that,” she said. “There will come a time when the kids are just too old and not really into being on TV because they want to have a normal life,” but for now fans don’t have to worry about our favorite Teen Mom leaving the show anytime soon!

The book is set to be released on June 27, but can also be pre-ordered here. 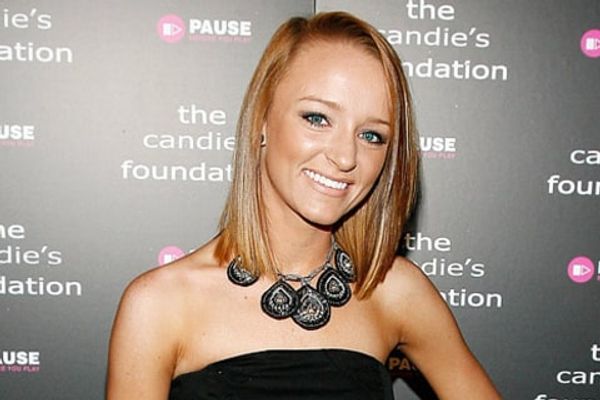