Meghan Markle Is Pregnant: All The Details!

Speculation surrounding a possible Meghan Markle pregnancy has been running rampant since she and Prince Harry tied the knot and now the news is finally official – there will be another royal baby!

Kensington Palace confirmed the exciting news with this statement:

Meghan’s mom, Doria Ragland, also released a statement regarding the news (via Kensington Palace). “Ms. Ragland is very happy about this lovely news and she looks forward to welcoming her first grandchild,” her statement read.

A source close to the 37-year0old mom to be told PEOPLE that Meghan recently had her 12-week ultrasound and everything looked good.

Prince Harry and Meghan wed just 5 months ago but made it clear at the time that they had babies on the brain.

The question is, will it be a boy or girl?

Royals are always quite modest with their necklines and it’s an unspoken rule from the Queen to cover up while making public appearances. Although Markle’s off-the-shoulder number isn’t overly revealing, it’s definitely a fresh take on royal style and something a little more daring. We love how she still looks polished and professional as a respectable public figure, but still incorporates trends and her own personal taste in her looks. The Queen, however, might have a different opinion on Meghan’s boundary-breaking fashion tastes like this cold-shoulder top!

Meghan Markle is quite untraditional when it comes to fashion, and especially when it comes to accessories. One of the most notable style moments that broke boundaries was when she stepped out wearing two mismatched earrings. Royals typically opt for minimalist jewelry that features dainty diamonds or pearls and a look like this is definitely trendy rather than timeless, which is a royal style standard we’re not used to. Although we appreciate Meghan breaking boundaries and staying true to her own personal style, we’re not sure the Queen would approve see this trend as appropriate during a royal outing.

Meghan Markle definitely surprised the world when she recently stepped out wearing these wide leg pants for a public appearance. Previously it was expected for royal women to wear skirts and dresses for official outings, but Markle has often opted for tailored pants instead. We love that despite joining the royal family, Markle still continues to stay true to her personal style and clothing preferences. Although we appreciate this shift forward, we’re not entirely sure the Queen would approve of this soon-to-be royal’s style preferences breaking royal protocol!

Queen Elizabeth is known for her bright, eccentric wardrobe and almost always steps out wearing a bold pop of color. Duchess of Cambridge Kate Middleton has seemingly followed suit and tends to lean towards colorful pastels and bright pieces within her own wardrobe! Meghan Markle, however, has proved with her latest public appearances that she will continue to stay true to her own love of neutrals and black. We think she looks totally chic and minimalist with this head-to-toe black ensemble, but we’re not sure the Queen would say the same!

It’s rare to see the Duchess of Cambridge Kate Middleton wearing exaggerated costume jewelry of any sort. Instead, the Duchess often opts for dainty diamonds or pearls, which we presume will be a transition that Meghan Markle will pursue once she becomes an official royal. Based on her previous public appearances, Markle tends to lean towards an edgier wardrobe, so statement jewelry might be a difficult trend for her to give up going forward!

Low cut necklines are a staple red carpet trend for Hollywood actresses, but this look will definitely not fly for Markle as she transitions from celebrity to royal figure! The royals tend to opt for modest necklines and cuts, often not even showing their knees, so we’re quite certain Markle will not be allowed to wear skin-baring looks like this low-cut metallic number going forward. Being a political figure of such stature definitely requires a certain level of modesty, and an edgy look like this definitely does not cut it.

Denim isn’t completely off the table with royals, and most notably, when Kate joined the family we noticed a subtle transition into more casual streetwear when appropriate. Kate, however, often opts for polished dark denim in a tailored skinny fit that comes across rather professional. Markle definitely has her own approach when it comes to denim and has been spotted on multiple occasions wearing distressed styles! Even on her first royal appearance with Prince Harry, the trendy star rocked faded jeans with slits the knees and a stringy, raw hemline. Although we love this edgy, casual look on Markle, we’re not certain the Queen would say the same!

It’s not just distressed denim or cleavage that is out of the question with the Royals, but details as minimal as nail polish are also a factor that Markle will have to take into consideration! The ever-polished Kate Middleton has shockingly never been photographed wearing nail polish and Queen Elizabeth has maintained a soft pink manicure regime for over 30 years. Based on the beauty track record of her predecessors, we’re quite certain we won’t see Markle step out anytime soon with anything even close to black polish on her nails!

Another unspoken royal fashion rule dictated by the Queen is to always carry a clutch versus a handbag or tote. The seemingly small style choice actually has quite a large significance in terms of public appearances! The Queen and Duchess of Cambridge almost always wear a clutch, which they often grasp with two hands, to avoid shaking hands with people. Whether she was aware of this protocol or not is completely unknown, but at one of her first public appearances with Prince Harry, Markle instead opted for a burgundy and navy tote bag.

Aside from cleavage-baring dresses, another royal style protocol surrounds dress length. Of all the Hollywood actresses, Meghan Markle has always been one the more modest side when it comes to fashion, but that’s not to say she’s by any means a stranger to a short hemline or two. By Hollywood standards, this patterned T-shirt dress is definitely modest, but in royalty, a knee-baring hemline like this won’t be acceptable for Markle anymore!

To go along with her edgy style, Meghan Markle is undeniably a huge fan of a gunmetal smoky eye! Prior to her royal linkage, Markle’s signature makeup look was light, glowy skin, a natural lip color, and a contrasting dark lid look. Royals such as Queen Elizabeth and Kate Middleton are huge fans of the minimalist, natural makeup look, similar to their nail color, so we’re quite certain a dramatic eye look like the smokey eye won’t get the royal stamp of approval for Markle anytime soon!

It’s an unspoken protocol that the royals support local fashion brands based out of the UK! Both Queen Elizabeth and Kate Middleton helped to put multiple British brands on the map by rocking local garments on a regular basis and helping to get British fashion brands in the public eye. Meghan Markle, however, has proven that majority of her wardrobe is Canadian-based and has no shame to rock pieces from the country in which she worked for many years.

The royal family is known for their polished and proper ways, especially when it comes to grooming. Kate Middleton never steps out without her shiny locks perfectly quaffed or her updos tucked into a sheer hairnet, which she most likely learned from her role model Queen Elizabeth. Markle, however, has proved that these prim and proper hairstyles are a royal tradition of the past and has recently stepped out on two separate occasions with her hair twisted into a loose, wispy bun with pieces left out to frame her face. The look is still undeniably elegant, but we’re not sure the Queen would see the style like this based on her own hairstyle track record!

Avid royal fans were appalled when Meghan Markle stepped out to announce her engagement breaking one of the most expected royal style rules — always wear stockings! Kate Middleton and Queen Elizabeth are both avid fans of a short tea dress, but always ensure to keep their look discreet by pairing sheer stockings underneath. One could argue that this dressing method is a way of the past, and Meghan Markle seems to agree by the looks of her public appearances with Prince Harry! She’s trendy, boundary-breaking and will definitely bring modernity into the traditional royal family when it comes to fashion.

Out of all her most shocking fashion moments thus far, the most controversial was unquestionably this sheer Ralph & Russo garment from Markle’s official engagement photoshoot! The sheer dress consisted of strategically placed embroidery and was definitely one of the most risque looks we’ve seen from the royal family. While some were disappointed to see the soon-to-be royal step out in something so suggestive, others were thrilled to see Markle breaking royal boundaries and staying true to her own personal style despite her transition from actress-to-royal. Nevertheless, we’re quite curious as to what the Queen had to say about this sultry dress! 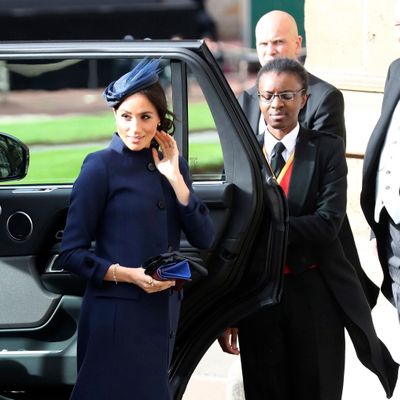