Prince Harry and Meghan Markle will be reuniting with the Queen which marks the first time they’re returning to London following their royal exit in March 2020.

The news was first reported by The Sunday Times on January 10th. They shared that Meghan and Harry plan to attend Queen Elizabeth II‘s 95th birthday and the Trooping the Colour parade in June. Royal aides shared with the outlet that the event is both official and a family occasion and that Harry and Meghan are expected to attend.

The aide added that the royal family is hopeful the queen’s birthday parade can occur as it normally does by June. They are prepared, however, to scale back the size of the event to adapt to the ongoing global health concerns.

The annual parade will be a special occasion since it will be the first major national celebration since the pandemic began. The event will also mark Meghan and Harry’s first time being seen with members of the royal family since their move to North America.

Entertainment Tonight previously shared that Harry and William reconnected virtually over the holidays. “There were phone and video calls over the Christmas and New Year holiday and the Sussexes sent presents to the Cambridges and vice versa,” royal reporter Katie Nicholl said in an interview.

“It was an opportunity in an otherwise very busy and chaotic year for both of the families to come together and connect, albeit virtually.” 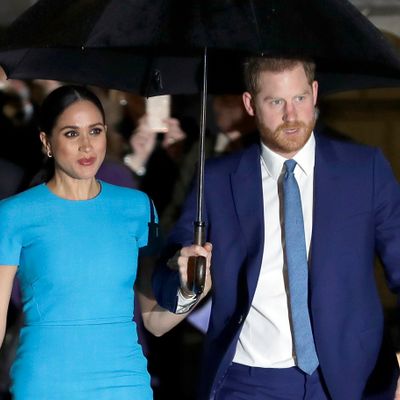