The Duke and Duchess of Cambridge took to Instagram to share their Father’s Day celebrations this year.

The duo shared a stop-motion collage that showcased four photos of the royal family. The video featured a bulletin board that spelled out “Happy Father’s Day” in the center.

“Wishing fathers everywhere a happy Father’s Day,” the duo wrote in the caption.

One of the photos on the bulletin board was a photo that many fans pointed out as a never-seen-before shot of Prince William with Prince George, Princess Charlotte, and Prince Louis. The photo appears to be a candid shot from Trooping the Colour in 2019, which can be seen in the lower-left corner of the collage. In the photo, Prince William is smiling at the camera while holding Prince Louis and Prince George and Princess Charlotte are hugging his legs.

The collage also included a photo of Prince Charles with William and Harry, Kate and her father Michael, and a photo of Queen Elizabeth, Prince Philip, and their great-grandchildren.

The Duke and Duchess of Cambridge have become known to use Instagram as a way to release never-seen-before photos of their family, especially when it comes to holidays and celebrations.

Check out their special Father’s Day photo collage below:

A post shared by Duke and Duchess of Cambridge (@dukeandduchessofcambridge) 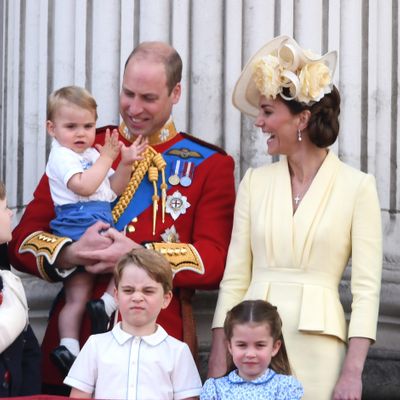