Season 24 of The Bachelor featuring Peter Weber is currently underway and we’ve already seen the list of women go from 32 to 15! There is already a lot of drama from Hannah Brown’s 2-episode cameo to Hannah Ann Sluss and Kelsey Weier’s #ChampagneGate incident – it’s about to only get more juicer. According to Reality Steve, on an upcoming one-on-one date with Peter, Victoria Fuller will turn red and try to keep face on one very awkward date.

In early October, Reality Steve shared details about Peter and Victoria F.’s one-on-one date at a Chase Rice concert in Ohio. While a live concert is typically common on The Bachelor, this one is even more interesting because apparently Victoria F. actually dated Chase Rice prior to coming on the show.

Reality Steve shared multiple photos and videos of Peter and Victoria F. on the date, sharing on Twitter, “TRUTH: I get emailed a lot of things about contestants. Before the show ever started filming, I was emailed quite a few things about Victoria. One thing in the laundry list that was sent me was that she definitely had spent time with/hung out/dated Chase Rice pre-show…(cont)…(cont)…that’s why he follows her on IG. I don’t know how serious it was, how long it was for, or how/why it ended. But don’t think for a second Victoria being on today’s 1-on-1 wasn’t done on purpose. Will be interesting to see if anything comes of it.”

At the time, she was not aware that she would be seeing her ex on stage, but you could see her face turn red from embarrassment and she tried to stay as strong as she possible could throughout it.

“Once they got off stage, Victoria was visibly upset talking to her producer with her arms crossed. Peter talked to Chase first. Then Victoria went to talk to Chase behind the tent w/ 2 camera crews filming the entire time. Soooo yeah, definitely more to this story,” Reality Steve tweeted.

He then shared several more videos and photos, including one where the pair have to go up and dance right in front of Chase Rice while he performs on stage. “Pretty much the moment Victoria realizes she’s walking up to a concert being performed by a guy she used to date. And being sick to her stomach. Victoria wanted no part of this. She can’t even look at Chase,” he wrote.

Despite the most incredibly awkward one-on-one date, it seems things still go pretty well between Peter and Victoria F. as she makes it to at least his final 12 according to Reality Steve.

After their one-on-one date and at the group date after-party, Alayah makes her return and has some interesting information to share about the Victoria F. She tells the women about her past with Chase Rice and how they dated. The other women didn’t know about this and immediately ran back to Victoria F. asking for more details about it. She then blows up at Alayah for digging into her past, calling her disrespectful, and so on. It’s quite possible that Victoria F. didn’t tell Peter about her past with Chase Rice and might have worried about Alayah exposing her.

(VIDEO): Pretty much the moment Victoria realizes she’s walking up to a concert being performed by a guy she used to date. And being sick to her stomach. Victoria wanted no part of this. She can’t even look at Chase. pic.twitter.com/iyMFS476iX 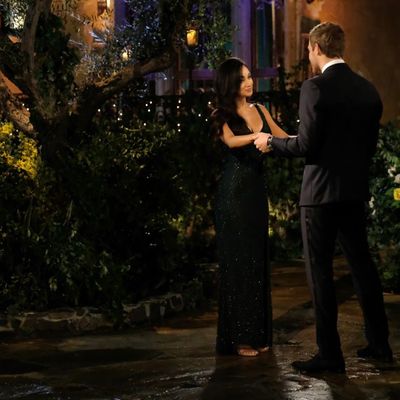