The production of Riverdale was temporarily shut down in the days following the sudden passing of Luke Perry and now as the cast and crew figure out how to carry on without their friend and costar, creator and showrunner Roberto Aguirre-Sacasa announced a sweet tribute to Perry.

“Going through pictures on my way to set. From the early days. With Luke in the middle. Our heart, always,” Aguirre-Sacasa began his post featuring the cast around a Riverdale High School crest.

“Tonight’s episode of #Riverdale finds Fred doing what he does best–helping Archie. It is dedicated to Luke, as all episodes will be for the rest of our run,” he concluded.

The end of the Wednesday, March 6 episode also featured the first “In Memoriam” placecard, reading, ” “In Memoriam Luke Perry 1966-2019.”

The Riverdale cast and crew returned to set after a two-day production shutdown following Perry’s passing on Monday, March 4 at the age of 52, days after he was hospitalized following a massive stroke in his home on February 27.

Perry, who played Fred Andrews, the father of Archie Andrews, is being remembered with countless tributes from friends, family, costars and crew members. He is being remembered as one of the most down-to-earth and humble celebrities in the industry, despite achieving iconic heartthrob fame as Dylan McKay in Beverly Hills, 90210.

Perry is survived by his daughter Sophie, son Jack, ex-wife Rachel “Minnie” Sharp, and in announcing his death, Perry’s rep, revealed that the actor was actually engaged at the time of his passing to therapist and former actress Wendy Madison Bauer.

In lieu of flowers, the Perry family asks that donations be made to Fight Colorectal Cancer and St. Jude’s Children’s Hospital. 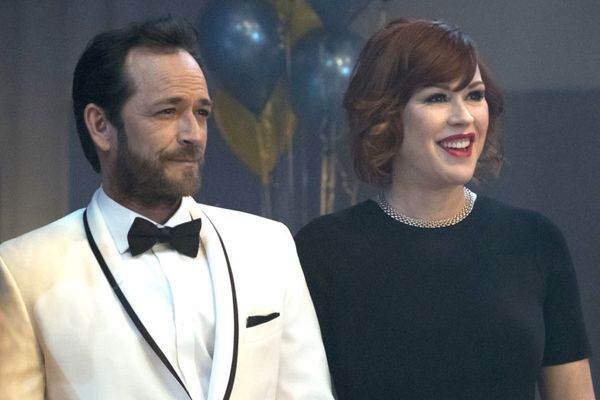