Less than a week after reports stated that Suits actress Meghan Markle had wrapped filming on the series and had relocated to London, the Royal Family has announced her engagement to Prince Harry.

In an official message from Harry’s father Prince Charles shared by Kensington Palace’s social media the engagement was announced and a timeline for the wedding was set, and it was also revealed that the pair became engaged last month. The statement reads: “His Royal Highness Prince Henry of Wales and Ms. Meghan Markle are engaged to be married.” It continues, “His Royal Highness, The Prince of Wales is delight to announce the engagement of Prince Harry to Ms. Meghan Markle. The wedding will take place in Spring 2018. Further details about the wedding day will be announced in due course. His Royal Highness and Ms. Markle became engaged in London earlier this month. Prince Harry has informed Her Majesty The Queen and other close members of the family. Prince Harry has also sought and received the blessing of Ms. Markle’s parents. The couple will live in Nottingham Cottage at Kensington Palace.”

In addition to the message from Prince Charles, Kensington Palace shared a statement on behalf of Markle’s parents as well, Mr. Thomas Markle and Ms. Doria Ragland, which reads, “On the announcement of their daughter Meghan Markle’s engagement to His Royal Highness Prince Henry of Wales, Mr. Thomas Markle and Ms. Doria Ragland said: ‘We are incredibly happy for Meghan and Harry. Our daughter has always been a kind and loving person. To see her union with Harry, who shares the same qualities, is a source of great joy for us as parents. We wish them a lifetime of happiness and are very excited for their future together.'”

One last message of support came from Harry’s brother Prince William and his wife Kate Middleton who stated, “We are very excited for Harry and Meghan. It has been wonderful getting to know Meghan and to see how happy she and Harry are together.”

Now that the engagement has been announced, Kensington Palace also confirmed that “the couple will take part in a broadcast interview to be aired this evening UK time,” and stated that the two will appear for a photo call at the Palace later this afternoon for official engagement photos. 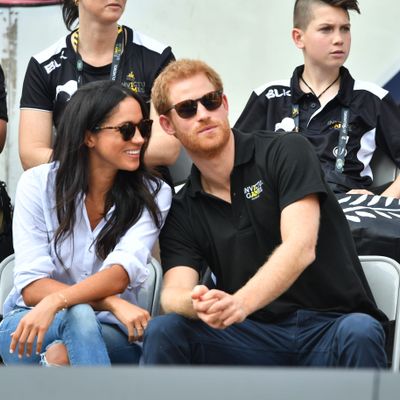