The Bachelor has now become one of the most successful reality series, and spawned a whole new genre of reality TV with it’s “search for love” format, so it isn’t surprising that Saturday Night Live couldn’t wait to tackle the newest season with a hilarious sketch.

On Saturday, January 14, the SNL cast did their own 4-minute skit called “Beard Hunk” in which they showed no mercy poking fun at Bachelor Nick Viall and the ladies vying for his love this season.

The skit included the “hunk” on a bench showing off his “sculpted beard” as continuous ladies tried their best to impress him including “Raquel” who described herself as “the worst girl in any room.” The antics just continue from there as a lady named Whatever who is looking for a husband despite not being old enough to vote, and then there is Ashley, who has one heck of a story but Bear Hunk doesn’t seem to mind the information.

Of course, all of the introductions are exaggerations of real women who have appeared on The Bachelor, including some who list their occupation as “twin” and others who clearly appear on the show just to try to get their 15 minutes of fame.

Check out the hilarious sketch below: 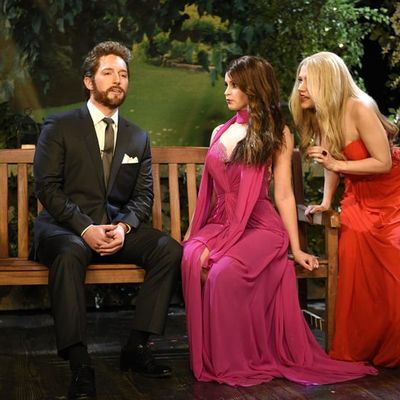