The Masked Singer has returned for its third week and after four entertaining performances, fans had to say goodbye to one masked contestant.

For week three, the singing competition show brought back the remaining contestants from Group A — The Sun, The Giraffe, The Popcorn, and The Snow Owls. After all the performances and voting, it was ultimately The Giraffe who landed himself at the bottom of the leaderboard.

The panel of celebrity judges, Robin Thicke, Nicole Scherzinger, Ken Jeong, and Jenny McCarthy, as well as guest panelist Joel McHale, tried their best to guess who was under the mask but there was a wide variety of answers.

Jeong suggested The Giraffe might be Shai LaBeouf while McCarthy guessed it might be Blink 182 drummer Travis Barker or comedian Seth Green. Scherzinger suggested that he might be Dale Earnhardt Jr, but it was McHale who came the closest when he guessed that it might be Jason Priestly.

When it came time for The Giraffe to remove his mask, he revealed himself to be none other than a different Beverly Hills, 90210 alum — Brian Austin Green! “You guys were all so close, but so far!” Green said. He also teased Thicke for not guessing correctly considering the fact that they’ve been lifelong friends, were in a band together as children, and are currently neighbors.

The Masked Singer airs Wednesdays at 8 p.m. ET/PT on NBC. 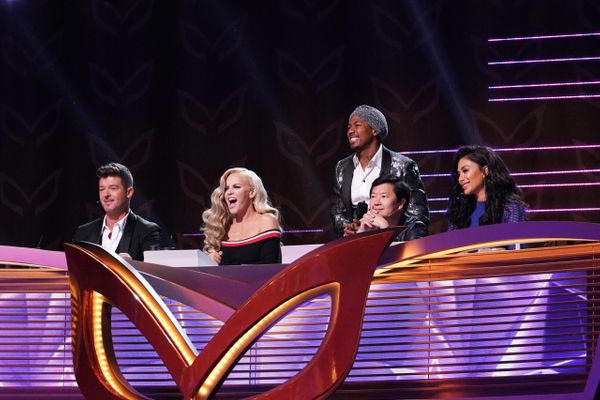