We Weigh In: Is DOOL’s Devil Storyline An Embarrassment To Soaps Fans?

When the good doctor on Days of Our Lives (DOOL), Marlena Evans (Deidre Hall), was first possessed by the Devil in the mid 1990s, it sent shockwaves through daytime television. Among the surprised viewers, many were deeply offended — although whether it was a matter of taste or faith is hard to say!

Regardless, the shockwaves resonated the most outside of daytime drama’s insular bubble. People who’d never watched DOOL were commenting on the storyline and, in many cases, ridiculing the NBC soap for abandoning any sense of realism.

Say what you will about the obvious double standard at play, which judges soap operas harshly for stretching reality when fantasy epics (Game of Thrones) and sci-fi shows (The Mandalorian) are revered for it. But did DOOL cross a line with Marlena’s possession? In their bid to conjure up some chatter around the water coolers of America, did DOOL writers take their audience too far outside of soaps norms?

At the very least, the Devil in Salem became a cultural touchstone of 90s television — and continues to cast a shadow over the soap today. While it further distinguished DOOL’s reputation for outrageous storytelling, it alienated the soap from its daytime peers. And while it succeeded in getting a lot of people talking, DOOL was oftentimes the punchline.

So, here we are, nearly thirty years removed from that infamous narrative, and DOOL — which just celebrated its 56th anniversary — is embroiled in yet another possession storyline. Deidre Hall is a treasure and continues to bring whatever nuance she can to her dialogue. National news outlets even had a ball reporting on the holy water that is stationed on set during Hall’s possession scenes. Yet, are viewers happy about this devilish rehash?

While it’s possible that a silent majority is pleased, the vocal percentage of DOOL fans are unimpressed with Satan’s return. Many of Fame10’s readers insist they won’t watch the soap again until this storyline is over, while others decry it as “ridiculous” and “stupid”.

Viewers’ patience — which can be described as supernatural in its own right — dipped sharply during the episodes surrounding Halloween, when various deceased characters were resurrected at the behest of the Devil. Appearing pale and dirty, Deimos (Vincent Irizarry), Nick (Blake Berris) and Charlie (Mike Manning) returned from the dead to haunt various Salemites with whom they had unfinished business.

Were some fans on the edge of their seats when Gabi (Camila Banus) checked a zombie’s pulse and declared him dead? Probably. Did some fans break into applause when Allie (Lindsay Arnold) knocked out the undead Charlie with an iron pan? Maybe. But I’d wager that far more DOOL viewers were cringing, fast-forwarding, or flat out not watching. Because it’s kind of embarrassing.

Soap opera romance, drama and adventure has always been hyper-realistic, but it’s the balancing act of escapism and realism that keeps audiences invested. That’s why storylines revolving around love triangles, company takeovers and (gasp…) interpersonal relationships never get old. A storyline involving zombies, on the other hand, pops that bubble of realism — and a certain integrity of storytelling disappears with it.

Want plotline predictions? Check out Days Of Our Lives Plotline Predictions For The Next Two Weeks (November 15 – 26, 2021)

It’s worth noting that James E. Reilly, who conceived the 1994 storyline of Marlena’s possession, would later go on to create Passions, a soap opera which took his paranormal leanings to other extremes. Passions earned its audience and lasted for nine seasons, but it would be a stretch to claim its legacy lives on in any meaningful way.

Truth be told, Passions was green-lit thanks to the ratings surge that DOOL experienced following Reilly’s original possession plot. At the time, producers believed it was advantageous to attract curious, new viewers over satisfying their loyal audience. Is that what producers are hoping will happen again, this time?

Satan has made his return during a particularly vulnerable time in DOOL’s history. Recent contract renewals with NBC have been full of dire speculation, and much of it is warranted. (Let’s not forget when producers released the entire cast from their contracts!) Is DOOL pinning their hopes for another renewal on the Devil’s gamble? Let’s hope they have a back-up plan, as ratings for early November’s supernatural spectacle aren’t promising.

Want more spoilers? Check out Days Of Our Lives Spoilers For The Week (November 15, 2021)

Perhaps their back-up plan could involve a tidy solution that erases any memory of this whole Devil nightmare. Until that happens, however, there’s no going back for DOOL. “Marlena” recently transformed Susan into a black cat, and now there are two Kristen DiMeras (Stacy Haiduk and Eileen Davidson) in town.

When Sami (Alison Sweeney) makes her long-awaited return, how will loved ones explain what she’s missed? On a broader level, how can anyone in Salem move on after the preposterous events of the past few months? And finally, a question DOOL producers should be sweating over: how will viewers move on? 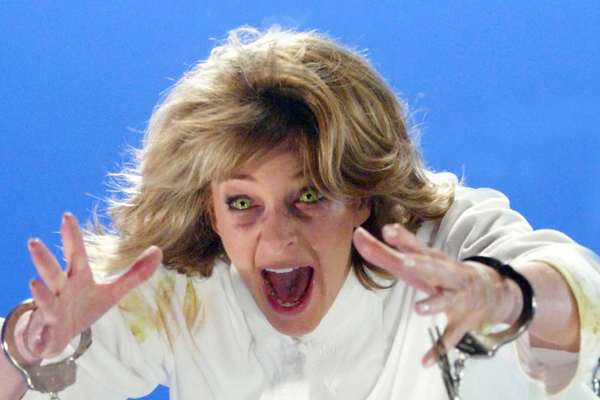 We Weigh In: The Devil Has Returned On Days Of Our Lives… What’s Next?