Young And The Restless: Plotline Predictions For January 2022

New year, new drama in the land of Genoa City! Will Chelsea calm down about Adam, or add fuel to her dumpster fire of a love life? Will Adam and Sally continue to bond? What’s Ashland hiding now? How ugly will things get between Devon, Chance and Abby? The Young and the Restless (Y&R) fans just love to speculate on storylines! As such, below are some Y&R plotline predictions for January 2022.

Will Chelsea let go of reunion plans with Adam? Mr. Newman has made it clear that he has zero interest in this, considering their recent past. While everyone might not be a fan of Adam’s, he’s not wrong about this. It is time both parties move on to focus on co-parenting peacefully. Sadly, Lawson will continue her complaining about Spectra, and even try to jeopardize any progress the redhead makes with Adam.

11. Adam Will Try To Keep Sally At Arm’s Length

Adam will try to keep Sally at bay, but fail miserably. The two will likely hook up in January and solidify their romance. They’ll attempt to be discreet about their relationship; however, Chelsea will learn about it and go even crazier than she is now. Sadly, this will affect Newman Media’s fashion platform.

Chelsea’s hate-on for Sally will extend in the boardroom. The two should try and get along for the company’s sake, but Lawson is too emotionally invested in all of this to see that. The saddest part of all is that as Chelsea bites back at Sally – and Spectra retaliates – Chloe will be caught in the middle of their corporate rivalry.

Y&R spoilers for January indicate that Ashland will have a new secret revealed this month. What else could this man be lying about? One thing that comes to mind is his health condition. Has he been honest about it all? If not, how will Victoria react when she finds out the truth? Could it be that he’s also “faked” his love for Vic all along to get his hands on Newman Enterprises? That’s another possibility.

8. The Friction Continues Between Nick And Victoria

What if Nick is the one who finds out about Ashland’s health condition and the lying? He may bring it up to Vic, but will she appreciate or resent the gesture? What if he overhears something sketchy that Locke says about Newman Enterprises and “wanting it for years”? Vicky may not believe Nick at this point. Y&R spoilers hint that the friction will continue between Victoria and Nick this month, and Nikki will worry about their relationship. Can these siblings ever get back to where they used to be?

Y&R spoilers reveal that Billy’s plan against Victor and Adam will backfire. A couple of things could happen here. On one hand, Abbott might actually fall back into bad habits, which would be devastating for him, his kids, and Lily. On the other hand, the Moustache could overhear or learn about their plan. This would not be good for Abbott or Winters. Mr. Newman’s retaliation might create devastating consequences for these two.

6. Michael Struggles With His Career

Y&R spoilers for January hint that Lauren will rally friends and family to help Michael as he deals with a career crisis. Could Baldwin feel like he’s in a rut and fall into a depression? Then, there’s also the idea that he makes a massive mistake and gets canned. What if he slips up with a minor detail and a violent criminal gets released? What if he learns that an old client he defended was guilty of a terrible murder? This could cause him to spiral.

Amanda seems motivated to help Devon achieve some Dominic time, despite the wishes of Chance and Abby. Hamilton believes he has earned scheduled time with the baby, while Abby is against it all. This is a very contentious storyline because both sides have a case. Had Abby not relied so heavily on Devon during Mariah’s pregnancy and Dominic’s infancy, then Hamilton wouldn’t have bonded so strongly with the baby. Plus, she literally dropped the baby off on his doorstep without batting an eyelash to go find her husband. No one knew where she was, and Devon welcomed the child with open arms. On the other hand, Hamilton agreed to zero parental rights at the beginning of all this. Still, Sinclair has witnessed Devon’s sacrifices for this baby, firsthand. She won’t let it go until he gets the entitled time with Dominic that he deserves.

4. Things Get Ugly Between Chance, Abby And Devon

Things are bound to get ugly between Devon, Chance and Abby. As Amanda (with her lawyer hat on) feels like Devon has a case, she’ll push it. Meanwhile, as Abby wants to appease her hubby and ensure he bonds with Dominic, she’ll also push back. But are “Chabby” being a tad selfish here? Devon was there when they needed him. Shouldn’t they at least allow him to see the child on a regular basis?

Mariah may see what’s going on with “Chabby” and Devon, and struggle with emotion. She knows how Hamilton feels, and she might believe that Abby is being selfish in keeping the baby away from him. After all, she was more than happy to take care of Dominic, but Abby chose to hand the child over to Devon. If Mariah resents Abby for this, she may side with Devon and help him in his efforts to win his deserved time with the child. Maybe they’ll join forces, legally, to do this.

Meanwhile, Mariah and Tessa will likely start the initial process of adoption this month. They may meet with a lawyer or adoption agency to get everything going. They’ll be excited; however, they might also get a reality check around how hard this journey can be and just how long it may take. It’ll be their first bump in the road.

1. Phyllis And Jack Tiptoe Closer To A Reunion

Thanks to Amanda’s friendly nudge, Phyllis may approach the idea of a reunion with Jack. Sure, she’s hurt him in the past; however, both have learned from their relationship mistakes. But will Abbott be on board? Perhaps they’ll decide to start completely fresh and go the dating route, with no bedroom intimacy from the get-go. Lucky Ms. Summers will get to be wined and dined by Abbott once again. 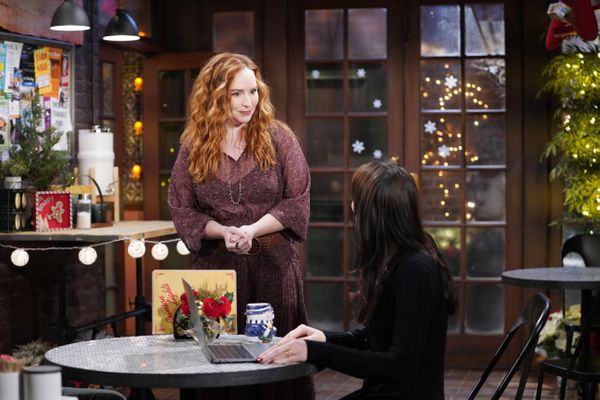 Young And The Restless: Spoilers For January 2022