Time for another week filled with love, scheming, and drama! Genoa City is jammed packed with these three things and more, with a popular character returning to town; someone begging for a second chance; and a shocking discovery will be found. Learn about these storylines and others in the Young and the Restless (Y&R) spoilers for the week of January 28, 2019.

Y&R spoilers tease that The Moustache will make a shocking discovery next week. What could it be? With Victor under house arrest, there’s not much he can dig up, so perhaps he finds someone snooping around on the ranch or sees something via his home surveillance video that alarms him.

10. Ana In The Limelight

It’s about time! Although, Y&R fans know that Ana prefers to stay in the shadows. Spoilers indicate that bro Devon will place her in the spotlight, so perhaps this could be the beginning of some conflict between the two siblings. Wait until he finds out that she’s hiding a secret from him!

Fen will continue to irritate Kyle this week, and Y&R spoilers hint that he’ll rub him the wrong way. These two can’t seem to find a way to get along at all, and their past history with Summer has a lot to do with it. Could Fen find out about Lola and Kyle not doing the deed? That would definitely be something that Fen could jab his nemesis about.

Speaking of Summer, fans can expect to see her splash back into Genoa City on Tuesday, January 29th. Y&R spoilers tease that she’ll return from her stint in Dubai a more sophisticated version of her former self. Having said that, she zeroes in on Kyle as soon as her feet touch back into town.

In fact, Y&R spoilers indicate that Summer will strike up a conversation with Kyle when she gets back, and go on and on about all the success she experienced while away in Dubai. She’ll also ask Kyle on a date right away. What will Kyle’s response be? A firm “no.”

Y&R spoilers tease that Billy will confide in Phyllis later on in the week. With Nick and Phyllis at odds (thanks to her role in J.T.’s disappearance coverup), and Vicky’s incident with Cane leaving a wedge between Billy and Victoria, do fans see a Philly reunion on the horizon? Anything is possible when it comes to these two.

5. Billy Hopes For A Second Chance

Y&R spoilers tease that Billy will want one more chance. Could this be with Phyllis or Victoria? He seems to have his hands in many pots this week. Either way, perhaps Billy should ditch any reunion plans with his exes and start fresh with a new love interest. He’s never had any luck with Vicky or Phyllis.

Speaking of Nick, thanks to Phyllis’ big mouth, he knows now that there were four ladies involved in J.T.’s murder, and the last one was Sharon. Nick will feel tremendously hurt by the fact that Sharon lied to him for months while they were together, and he’ll let her know that she was the only one he really trusted. Y&R spoilers indicate that Nick will have a hard time dealing with what he’s learned and struggle with what he should do now that he knows the whole truth.

Y&R spoilers hint that Victor will give Arturo an ultimatum this week. Will he try and jeopardize Abby’s engagement by paying Arturo off to skip town, or simply issue a threat to the Rosales around hurting his daughter? Either is a good possibility. In other Victor spoiler news, someone wants revenge on him this week — this really could be anyone in town at this point!

These two have had a hard go since 2019 hit. With Jack losing his trust in Kerry thanks to her lie, it seems as if this couple is starting to slow down. Y&R spoilers suggest that Kerry and Jack will come to some sort of agreement this week in regard to their current relationship. Will they break up or decide to continue on?

Vicky will have a chat with daddy Victor this week, which will most likely center around their mom and the entire J.T. cover-up debacle. In other Y&R spoilers, Nikki makes a mistake that proves to be perilous for her, and Lauren decides to test Kyle. Seems like Fen isn’t the only Baldwin nipping at Kyle’s heels. 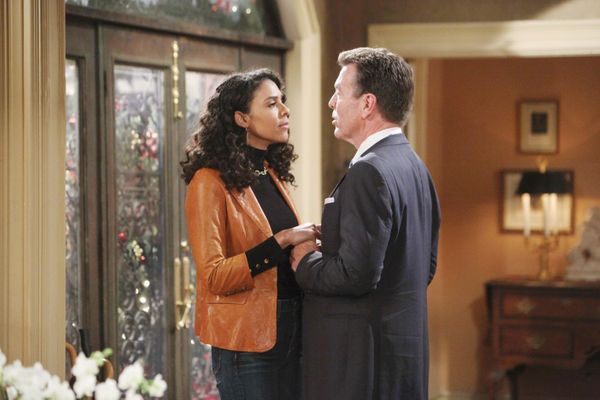