Days Of Our Lives: Plotline Predictions For January 2022

What’s Johnny’s big news? How will Chanel and the rest of his family react to it? Will Ava continue to terrorize Nicole (and Rafe)? Will Abigail and Xander form a bond as they search for Sarah Horton? Days of Our Lives (DOOL) fans just love to speculate about storylines! As such, below are some DOOL plotline predictions for January 2022.

DOOL spoilers for January note that Satan… eeerrr… Johnny will have a major announcement for Marlena and John. In fact, it seems he has news for all his loved ones. Could Johnny decide to file an annulment on his recent marriage? Could he ask John and Marlena if he can move in with them? This would have the Devil that much closer to Marlena, if she’s the target of his most recent scheme.

DOOL spoilers for this month reveal that Johnny will leave Chanel broken-hearted. This leads to speculation that he could dump his wife and toss her to the curb. This will devastate both Chanel and Allie, along with many others in Salem. While their marriage was a stunner (and maybe a bit too soon), they did make a good couple.

10. Allie Supports Her Friend (A Little Too Much)

DOOL spoilers for January promise that things will get “intense” between Chanel and Allie. If Johnny breaks things off with Ms. Dupree, Allie will be by her side to support her. She won’t be smug and say, “I told you so,”; however, if Chanel gets emotional, Allie will console her. Could things get passionate between these two women? They are best friends, but they’ve crossed the line before.

Fans are still unsure of what exactly the Devil had planned for sweet lil’ baby “Cin”! As the month of January unfolds, viewers are likely to get more insight into what Satan has in store for the infant. Expect Johnny to become a little more chummy-chummy with Ciara and Ben. He’s got a connection to Ciara through family; after all, Bo is Sami’s uncle. He’ll convince her and Ben that it’s time to strengthen their Brady bond. Little does she know that he’s really after her baby!

Do any other fans think that Xander and Abigail may bond during the search for Sarah Horton? The two could likely become close friends or possibly feel some sparks together. They’ll be working very closely, so they are bound to earn each other’s respect (at the very least) or simply see one another in a new light. Whether chemistry is felt or a special friendship evolves, this storyline between Abby and Xandy will be interesting to see unfold this month.

7. Gwen’s Too Scared To Scheme

Abigail intimates Gwen, especially since she was the one who nailed Rizczech for the baby lie she recently told. While Gwen does not like the idea of Abby joining forces with Xander to find Sarah Horton, she’ll be way too scared to create stumbling blocks in their investigation. Gwen will watch in horror as the two not only become closer but also inch forward to finding another threat: Xander’s ex-fiancé.

As Abby and Xandy look for Sarah, Steve and Kayla will be searching for Kristen. At some point, the foursome will realize that their investigations are connected. There will be teases around this, and they’ll come to that conclusion at the end of the month. With February sweeps on the horizon, it’s likely that both Horton and DiMera will be found at that point.

While Abby is getting closer to Xander and finding her fellow Horton family member, Chad will be preoccupied with DiMera and all the lies he’s told. He’ll feel uneasy about knowing that EJ is innocent in Sami’s kidnapping, especially once EJ’s trial starts up in mid-January. Will Chad fess up and save his half-brother at the umpteenth hour?

Speaking of, can anything save EJ at this point? Unless Chad comes forward, he might be a sitting duck. DOOL spoilers for January hint that Lucas will return to Salem for the trial, and it seems as though he’ll swing into town without Sami. Both Chad and Lucas aren’t really the manipulative types, so will either crumble under pressure when reality hits them? Mr. Horton was only trying to score Sami, but will he come to a realization that it’s wrong to send an innocent man to prison? He dislikes DiMera, but can Lucas cross that line?

3. The Reunion Takes An Unexpected Turn

Sami and Lucas recently left town to give their love another try. A fresh chapter out of Salem is probably what the doctor ordered, but what if their reunion took an unexpected turn? Maybe things didn’t go as well as either had thought or hoped? If Lucas returns for EJ’s trial because he and Sami split up (far sooner than anyone anticipated), could Horton realize it’s time to clear DiMera’s name?

2. Ava Continues To Creep Nicole Out

Ava will continue to seek revenge against Nicole (and Rafe). If they think the bear with no head is bad, they clearly don’t know what the mob princess is capable of! Vitali will continue to “stalk” Nicole to the point where Rafe will become overly protective. He may suspect Ava (or not), but Vitali’s scheming might end up bringing Hernandez and Walker closer together.

If Nicole and Rafe’s one-night stand turns into a bundle of baby joy, January would be the month for this storyline to unfold. Walker could realize she doesn’t feel right and take a test. Do any other fans out there hope this is the case? They make a great couple. Plus, it would be nice for Hernandez to have a child of his own! 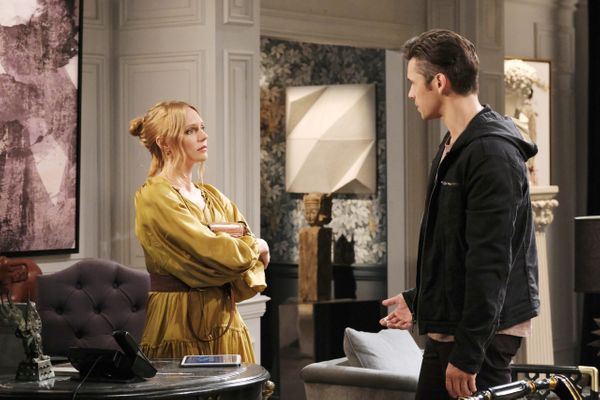 Days Of Our Lives: Spoilers For January 2022