Calling all Days of Our Lives (DOOL) fans! What’s on tap for the next two weeks? Major drama with Sami, while Kristen has her hands full trying to cover something up, and Ben finds a glimmer of hope when it comes to Ciara. Learn about these storylines and others in the below DOOL spoilers for March 22 to April 2, 2021.

DOOL spoilers for the week of March 22nd reveal that Sami will confess something to Rafe. A Days preview video implies that Sami believes Allie is Charlie’s shooter. Momma bear will do all she can to protect her cub, and a major step is to take the blame for Dale’s passing. In other Sami news, she’ll head straight into a trap she set. Sounds about right.

According to Days spoilers for the week of March 29th, Sami and John will have a showdown. These two have always had a touch-and-go relationship over the years, so here’s hoping things don’t end up overly sour after all is said and done. Speaking of confrontations that week, Jan will return on Friday, April 2nd, and find herself facing off against Belle and Shawn. Will the young lady’s temperament have changed since being in a coma, thanks to John?

Across town, Sarah will fight Kristen to get her freedom back the week of March 22nd. Actress Linsey Godfrey (Sarah) announced her exit from the show recently, so Horton is either on her way to her funeral or that island Kristen mentioned. Regardless, this week and next might provide an insight on how Sarah’s farewell in Salem will go down.

DOOL spoilers for the week of March 29th imply that DiMera will be in hot water. Added teasers suggest that she’ll turn to Vivian for help to cover something up. In other news for that week, Brady will stop by Stateville, and added spoilers hint that Kristen might be ready to confess something to him. Is DiMera in over her head with her latest scheme?

Kristen is going to get “rid” of Sarah, one way or another. So, how will Rex and Xander react to Horton’s exit? Days spoilers imply that Rex will have some unexpected news for parents Roman and Kate this week, while Xandy will find himself in a dark place the week of March 29th. Added teasers reveal that Xander will get drunk, and attack Roman! Speaking of, there’s a good chance that Roman and Kate could re-ignite their romance at some point in the near future. That is if Kake disbands.

Speaking of Jake, that weekly DOOL preview video shows a conversation between him and Ben, where DiMera encourages his friend to “fight” for his relationship. Sounds like Ben will be down about Ciara’s memory lapse in the coming days. Added spoilers imply that he’ll go and visit her this week, but could he be too late? Ciara will be thrilled when Theo pops by her hospital room the day before.

DOOL spoilers imply that Ben will try with all his might to get through to his wife the week of March 22nd; however, it doesn’t sound as if it’ll be successful. Added teasers for the week of March 29th hint that he’ll approach Marlena, hoping that she can step in and help. Could hypnosis do the trick for Ciara?

DOOL spoilers indicate things will be busy for Gabi over the next couple of weeks. Teasers for March 22nd note that she’ll join forces with Abigail DiMera again. What could these young ladies be up to now? Meanwhile, the week of March 29th, Gabi will decide to mix a little business with pleasure and go out for dinner with Philip. Sounds like the outing will act as quite the “show” for Kate and Jake.

DOOL spoilers for this week reveal that Eli and Lani will be busy preparing the final touches on Jules and Carver’s baptism; however, the drama will rear its ugly head in the form of Paulina. There’s a good chance that Elani don’t tell their Auntie she’s not involved in the ceremony, but that won’t be the only drama that surfaces.

DOOL spoilers imply that the baptism will happen, as friends and family gather to be a part of this major milestone for the twins. Added teasers hint that Paulina will have something unexpected for Elani. Could it be a guest that wasn’t invited? Actress Precious Way enters Days this week, and the soap’s weekly preview video indicates that she’ll enjoy some drinks with Tripp and Claire until she tries to skip on the bill.

Seems as if there may be some mother-daughter drama brewing on the horizon between Chanel and Paulina, and that DOOL preview video shows Paulina stating that Chanel needs to find a job. In other news, Lani’s “Auntie” will be at the center of some family drama, in the coming days. Does this have to do with her daughter?

Nicole will start to feel suspicious of Ava this week, while Claire will try and brush off Gwen. Some interesting Days spoilers for the week of March 29th, as Kayla and Steve must deal with some unexpected baby news. Added teasers hint someone will be with child, and surely this has to do with another female in Salem (and not Kayla), where the super couple feels the need to get involved. 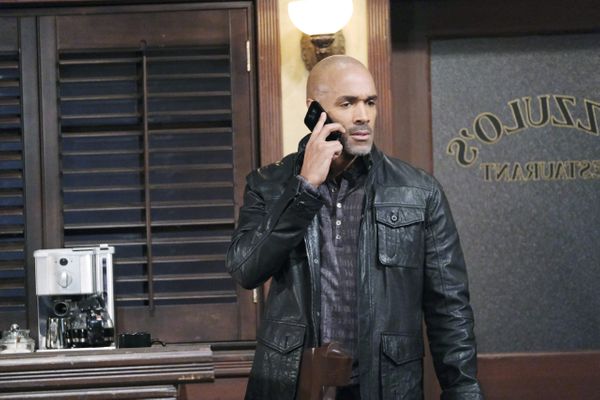