Calling all Days of Our Lives (DOOL) fans! What’s on tap for the next two weeks? Some April Fool’s Day fun, while Kristen seems over her head, and Rafe zeroes in on Charlie Dale’s shooter. Learn about these storylines and others in the below Days’ spoilers for March 29, to April 9, 2021.

DOOL’s weekly preview video hints at some dream sequences and outrageous storylines for the April 1st episode this coming week. From Kayla giving birth to Stefano’s clone to Sami ending John Black’s life via injection, and Chloe Lane acting a little off-key, it seems as if storylines will be over-the-top (well, more than usual) on April Fool’s Day.

11. Kristen’s Bitten Off More Than She Can Chew

Over to Kristen, DOOL spoilers imply that she may have bitten off a little more than she can chew. Added teasers hint that Susan will be more than ready to switch back to her “regular” life; however, just as Banks informs DiMera of this, Chloe ponders “coming clean” to Brady about her feelings, with Kristen in the “know” about this. In other related news, Kristen will turn to Vivian Alamain for help this week, and there is also a possibility that DiMera will “come clean” to Brady in the coming days.

Days spoilers state that Sami will be taken aback by something Rafe tells her the week of March 29th. Sounds like he might be close to figuring out who really shot Charlie Dale. Added teasers imply that Hernandez will tell her something about the case. What has Sami so stunned? In other news, Gabi will tell Rafe she knows who shot Charlie, the week of April 5th. As the days go by, Rafe will have another prime suspect in the case. Does he finally nail the person behind Dale’s passing?

As Friday hits this coming week, DOOL spoilers reveal that Ava will make a confession to Nicole. As Monday, April 5th rolls around, Vitali will hope that Walker will keep her secret. Does this have to do with her son’s shooting, or potentially Ava’s ties to the mob? Could it be she’s starting to have feelings for Rafe? In related teasers, Nicole will get some more disappointing news from Eric, the week of April 5.

Across town, DOOL spoilers indicate that this week, Philip will be placed in harm’s way, accidentally by Gabi. As the days go by, Jake and Kate will find these two “business” partners in a compromising position. How will Jake react? In other news, while Gabi and Philip seem to be gravitating towards each other, added teasers imply that Philip and Chloe will hook up as the weekend approaches. Guess Lane doesn’t tell Brady how she feels, after all.

DOOL spoilers reveal that Ben will feel desperate this week. So much so, he’ll turn to Marlena for help. Sounds as if he’ll have hypnosis on brain. It’s a great idea; however, how will Ciara feel about it? As the days go by, added teasers indicate that Marlena will approach Ciara about the idea, but she’ll be hesitant.

Days spoilers hint that Marlena will have to “negotiate” with Ciara about hypnosis. Spoilers reveal that Evans will “make a deal” to try and convince Mrs. Weston to cooperate. Added teasers for the week of April 5th indicate that Ciara may undergo the process with Marlena, but she’ll be very distressed by what she learns about her recent past.

Speaking of Ciara, DOOL spoilers for the week of March 29th suggest that she and Theo will get a little closer this week. Is this why she doesn’t want to undergo hypnosis? Meanwhile, added teasers reveal that Theo will come across someone from his past in the coming days. Who could this be, and how are they connected?

Jan Spears will return the week of March 29th, as actress Heather Lindell reprises this role. Sounds as if Jan will come out of her coma, and have a confrontation with Belle and Shawn in the coming days. Added teasers note there could be a chance that Spears’s temperament has changed. Could fans see a new-and-improved Jan, thanks to her coma?

DOOL spoilers imply that Sami will offer an update on E.J. the week of March 29th. She’ll have a chat with Lucas and provide some information on her hubby, and the status of their marriage. According to teasers, it doesn’t sound as if things are going so well for this super couple. In related news, there are hints the week of April 5th that E.J DiMera could be returning to Salem.

Speaking of the DiMera mansion, DOOL spoilers for the week of April 5th state that there will be plenty of drama in that household. First, Gwen will apologize to Chad for all she’s done. Will he accept? Meanwhile, Chabby heads to counseling, where added teasers hint that Mrs. DiMera won’t be as forthcoming as Mr. DiMera.

Rounding out Days spoilers for the week of March 29th, Xander still won’t be in a good place. Sadly, added teasers note he’ll get drunk and will attack Roman early on this week. Here’s hoping no one gets hurt! Meanwhile, Chanel wants to live her best life, but Paulina’s going to make her get a job to pay for it all! 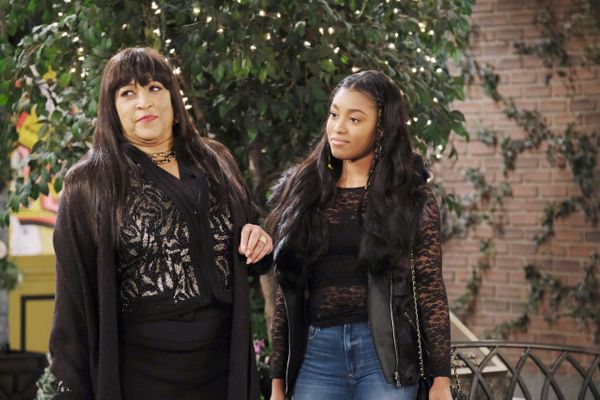 Days Of Our Lives: Spoilers For Spring 2021