Calling all Days of Our Lives (DOOL) fans! What’s on tap in the land of Salem over the next two weeks?! More Sami sightings, plus some Devil drama. Also, Brady will be attacked! Learn about these storylines and others in the below DOOL spoilers for November 22nd to December 3rd, 2021.

Friday’s cliff-hanger literally left Days fans on the edges of their seats when long-lost Sami, who’s been kidnapped, reached out to Marlena. However, fans know her mom isn’t exactly feeling herself right now, so was that the right move? DOOL spoilers for the week of November 22nd hint that Sami’s call to Marlena will continue, and viewers might find out where the vixen is and who’s taken her.

DOOL spoilers for the week of November 29th suggest that a man in a flannel shirt will be holding Sami hostage. Added teasers state that Sami will drill him about who is holding her “hostage”. In other news for that week, Marlena, Ciara and Ben will take a walk and run into a hiker. Is Satan behind Sami’s kidnapping? Will Ciara and Ben have the same fate?

The Days weekly preview video offers some insight into what the Devil will be up to over the coming days. Sure, there will be plenty of romance with love scenes between Johnny and Chanel, as well as Ciara and Ben; however, it also seems as if Devil Kristen and John will kiss, too. Yikes! In addition, the video highlights some tense scenes as Doug will inform everyone that Marlena is the Devil during Thanksgiving dinner, while Paulina proclaims that Chanel is no longer her daughter!

Speaking of Doug, the good news is that it looks as if Belle’s injunctions over Williams’ power of attorney will be approved. As seen on the Days preview video, Doug will be out of the facility and enjoying Thanksgiving dinner with the Horton clan surrounding him. The bad news? “Marlena” will show up to confront everyone.

Meanwhile, DOOL spoilers for this week suggest that the DiMera family feast will also have drama, as Anna, Tony and EJ bicker over… well, who knows at this point?! In other news, Days will not be seen on Thursday, November 25th due to the American Thanksgiving holiday. For those celebrating… enjoy your turkey!

7. Rafe and Nicole Move On

Across town, DOOL spoilers for the week of November 22nd note that Nicole and Rafe will try to move on from their one-nighter. Things will heat up between EJ and Walker, while Hernandez gives Ava Vitali a second chance. Added teasers imply that this won’t go over too well with his sister, Gabi.

DOOL spoilers suggest that the drama with “Marlena” won’t stop there. This coming week, Steve and Kayla will have some questions that Dr. Evans won’t want to answer. As the days go by, added teasers imply that the Devil will be done playing games with John, and it seems as if Kristen will be summoned to “get rid of” Black for good.

5. Steve For The Save

As Kristen ponders the idea of nixing John from Salem, Days spoilers suggest that Steve might be on the trail to save his BFF. He’ll be closing in on Black’s location, with added teasers suggesting he may not make it in time. Will Kristen move forward with the Devil’s request? She’s not the nicest lady in Salem, but murdering her daughter’s grandfather seems a bit much, even for DiMera!

Sounds like the aftermath of Paulina’s secret will unfold during the week of November 22nd. DOOL spoilers state that Olivia won’t be thrilled with what happened, and she’ll have no issues telling her daughter. This may prompt Ms. Price to approach “Marlena”, as added teasers suggest that she and the Devil will have a confrontation.

3. Will Paulina Be Kidnapped, Too?

DOOL spoilers for the week of November 29th suggest that Paulina and John will “compare” notes about Marlena. Will John be able to escape the DiMera crypt, or does the Devil kidnap Paulina, too? If Ms. Price confronts the Devil, it might become a situation that is far more than what Paulina bargained for.

2. Philip Attempts To Encourage A Confession

Days spoilers for the week of November 29th indicate that Philip and Chloe will take center stage (along with Brady). It seems like Philip will try to get Chloe to admit her affair, although fans know there’s nothing to really “admit” on her part. Still, as the days go by, Brady will be brutally attacked. There’s a good chance that everyone might look to Philip for answers.

Lastly, DOOL spoilers for the week of November 29th note that Xander will make a huge discovery. Could it be the very same one that Gwen made this past week? Will Xandy learn the truth about Sarah and her whereabouts, or is this simply a cryptic teaser about something else? Only time will tell! 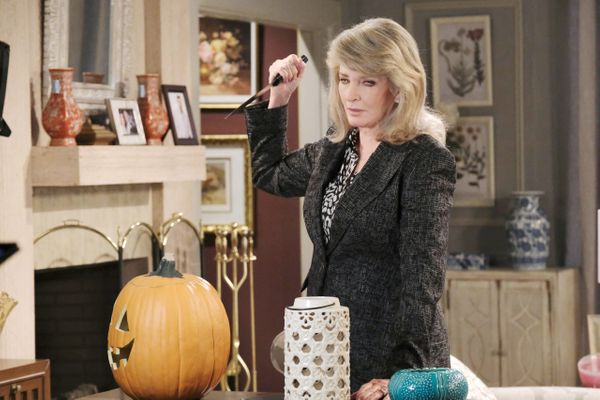 We Weigh In: Is DOOL’s Devil Storyline An Embarrassment To Soaps Fans?