Calling all Days of Our Lives (DOOL) fans! Time to gear up for another drama-filled week in the land of Salem! “Nicole” and Gabi will battle once again; a character will have a medical emergency; and Anna has an announcement! Learn about these storylines and others in the Days spoilers for the week of August 12, 2019.

Days spoilers indicate that Haley will have a medical emergency of sorts this week. The good is that it won’t be around suicide; however, it seems it may be around those tranquilizers she’s taking. Regardless, teasers also hint that Tripp will be the one to save the day for her this time around, versus J.J.

DOOL spoilers suggest that Chloe will reach out to Marlena over worries around “Nicole” this week. Everyone can see that Walker has been acting out of character, and most have chalked it up to grieving over the loss of her child. When Chloe approaches Evans this week, Doc will want to do all she can to help.

On to some lighter spoilers, DOOL teasers suggest that John will try to surprise Marlena with a romantic evening, and Marlena will be plotting behind John’s back trying to organize the very same thing. Neither will know what the other is up to, but it seems as if “Nicole” may end up ruining the night for both of them when all is said and done.

In fact, DOOL spoilers state that “Nicole” will lose her cool on Doc this week, so expect things to get heated between these two ladies. While Marlena doesn’t realize that “Nicole” is really Kristen, Days fans know the hate-on DiMera has for Evans, and she may unleash a bit of that in the coming days as she continues to parade around as Walker.

Marlena won’t be the only one to feel Kristen’s wrath. DOOL spoilers indicate that “Nicole” and Gabi will have a major confrontation this week. There is already a tremendous amount of bad blood between the two ladies, and it seems that it’ll only get nastier in the coming days ahead.

J&J fans might want to cancel any ideas around reunion plans between Jack and Jennifer, as DOOL spoilers reveal that Deveraux will confront her this week. Jenn wrote an article about Jack, and he’ll clearly have some questions. Will his reaction be a positive one, or something that starts a fight? Only time will truly tell!

DOOL fans were pleasantly surprised to see Anna DiMera back in Salem last week, and spoilers indicate that she will make an announcement in the coming days that is sure to shock many. Could this be in regard to Tony’s return, or potentially DiMera Enterprises? She may simply be announcing that she plans to stay in town for an extended period of time, or it could be about her past

DOOL spoilers tease that Kate will enter an alliance this week, making a deal with the “devil.” Could this be a partnership with Kristen DiMera, or maybe Gabi? There are so many scheming people in Salem right now, this “devil” really could be anyone. Kate is always motivated by covering her own butt, regardless of who it is, the deal will benefit Roberts to some degree.

More interesting than the deal she is making is the idea that DOOL spoilers also tease that Cen will catch Kate in the act of this partnership. If it is a deal with Kristen DiMera, the very fact that Ben and Ciara witness the alliance may mean that the “Nicole” jig will up. Here’s hoping they don’t get caught eavesdropping. 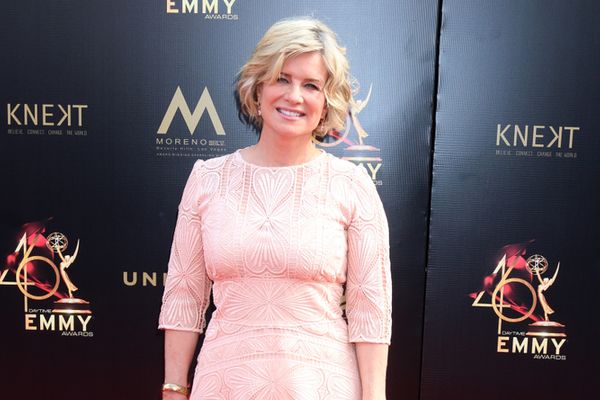