What is the best part of every season of The Bachelor/Bachelorette? Why the blooper reel, of course! Here are our picks for the funniest Bachelor bloopers ever.

In one of the best episodes ever to air for a whole bunch of reasons — the zombie paintball group date on Chris’s season — Chris is taping an interview for the camera when one of the women runs up and tries to scare him, but the joke is on her. “You just ran into my fart,” Chris says, in what is surely one of the best lines spoken in nineteen seasons of the show. (Video at 0:39).

While on a romantic outdoor dinner date with one of her suitors, Bachelorette Desiree is spooked when a hanging lantern suddenly falls and breaks…and then another and another. All of a sudden, all the lights are falling and popping all around them and it turns out the string connecting them is on fire. You’ve got to love it when the props malfunction. (Video at :20).

Bachelor/Bachelorette host Chris Harrison dings his champagne glass — the famous signal that a rose ceremony is about to begin — and his glass breaks perfectly in half. The man is so cool, so suave, that he even breaks a glass in the coolest way possible. How does he do it? (Video at :50).

English-as-a-second-language Bachelor, Juan Pablo Galavis, was giving an on-camera interview when he uttered these memorable words: “Somewhere, there’s somebody that has the qualities I am looking for — who will accept me and my little package.” By “little package,” he meant his daughter…we think, but we love to pretend he was talking about something else. (Video at 1:34).

In one of the first peeks at Kentucky cowboy Joe Bailey’s true colors (currently on full display in Bachelor in Paradise), he and Bachelorette Kaitlyn Bristowe are enjoying an intimate moment on a park bench when Joe suddenly interrupts their make-out session to say, “I’m sorry, sweetheart, but I’m about to p— myself.” He then hurriedly gets up and shuffles over to some bushes where he relieves himself. Such a classy guy, that Joe. No wonder Kaitlyn broke up with him as soon as he came back. He didn’t even wash his hands.

In what was one of the strangest requests ever made on The Bachelorette, contestant Joshua Albers asks Bachelorette Kaitlyn Bristowe to give him a haircut, in a bid to get a little extra time with her while on a group date. Unfortunately, the clippers Kaitlyn’s using are defective or something, and she ends up only shaving one side of his head. Oddly, while the haircut is definitely bad, Joshua somehow looks better than he did before, but he still gets the boot at the rose ceremony for ripping on Nick.

When contestant Robyn Howard emerges from the limo on Sean Lowe’s season, the last thing anyone expects her to do is go all ninja on him. But all of a sudden, the oil field account manager from Texas launches into a backwards handspring and tries to make it a double — but falls on her head. Oops! And ouch.

While having a serious conversation in Whitney Bischoff’s living room on his hometown date with her, Bachelor Chris suddenly gets distracted by Whitney’s little white dog who has started going to town on a stuffed animal a few feet from them. “That’s just what she does,” Whitney assures him. Look on the bright side, Chris — at least it wasn’t your leg!

In the best guest appearance by a bug ever on The Bachelor, a beetle makes its way onto the outdoor set on Brad Womack’s season and causes contestant Alli Travis to go into full-on freak-out mode. First, Alli thinks she is going to throw up because she hates bugs so much, but then another contestant picks the beetle up on a sheet of paper and starts to carry it toward Alli, causing her to FLIP OUT, at which point she stumbles backwards into a wall and throws her Coca-Cola at the bug. Meanwhile, Bachelor Brad and Michelle Money are in the hot tub around the corner enjoying a sensual moment, until they hear all the screaming. Way to ruin a moment, Beetlebug!

In what has to be the most epically awkward moment in rose ceremony history, Bachelor Chris Soules calls out contestant Juelia Kinney’s name, but another contestant, Jillian Anderson, apparently mishears him and starts walking toward him. When Chris repeats Juelia’s name, Jillian clues in, laughs and apologizes — and humiliates herself further by tripping on the Aztec-printed rug at her feet and falling backwards onto the floor. When she gets back to the group, someone apparently tells her that the rug is now messed up — presumably making it a tripping-hazard for someone else — so she nods and returns to smooth it out, and consummate gentleman Chris comes to her aid. At least Chris gives her a rose afterwards or this poor girl might never have set foot in public again! 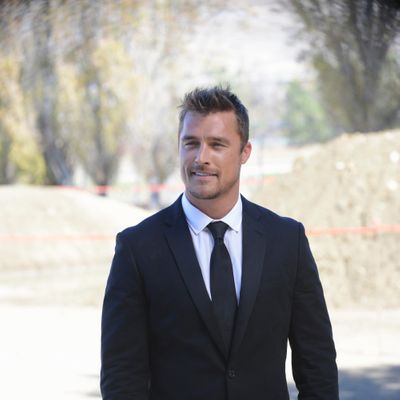