Gabrielle Union is best known for her roles in teen films like Bring It On and She’s all That, but she’s also had starring roles in films like Bad Boys II, Cradle 2 the Grave and the CBS medical drama, City of Angels. She’s been acting for quite some time and is currently starring as the lead character in the BET drama Being Mary Jane. Union has also made headlines for her business endeavors, activism and relationships with professional athletes like Jason Kidd, Chris Howard and her current husband, Dwayne Wade. It’s hard to believe this incredibly smart and talented actress is turning 44 soon because she hasn’t aged a day in the past 20 years, but she is! So here’s a look at 10 things you probably didn’t know about Gabrielle Union:

Gabrielle Monique Union was born on October 29, 1972 in Omabha, Nebraska. Her mother is a former dancer and social worker, and her father was a former phone company manager. Since she was a little kid, her close friends and family have called her “Nickie” which is short for Monique, her middle name. Union was raised in a household that loved country music and football. In an interview with Us Weekly she said she “loves country music” and that her favorite go-to karaoke song is “Friends in Low Places” by Garth Brooks. She is also a huge fan of the show Nashville. “My husband and I are cheering for Deacon to win back Rayna Jaymes!” she said.

In high school, Union was the all-star point guard in basketball. She also played on the soccer team and ran track. “I played sports year-round: basketball, soccer, softball, and I ran track year-round, from the time I was, like, 6, 7,” she said in an interview with ESPN. “I was, in high school, a career 93-percent free-throw shooter.” When she attended the University of Nebraska she played on the soccer team, but later transferred to UCLA. She graduated from UCLA with an honors degree in sociology. She’s also really into sports. She told the Boston Herald that she built a sports bar into her home with Dwyane. This might explain why she also has a ‘thing’ for dating athletes!

Gabrielle Union was brave enough to share her story of being raped when she was only 19-years-old. She uses her story to be an inspiration to other women and tells others not to be a victim of their abuse. “I hated feeling like a victim, it makes you lazy. I wanted to embrace being a survivor. I was raised to be an independent woman. That’s the road I decided to take,” she said on The View. It happened while she was working at her summer job at Payless ShoeSource in California. She was closing up the store when a man robbed the shop and sexually assaulted her at gun point. It was later discovered that her attacker was a former employee of another Payless store where he had also assaulted another employee and robbed the store. Her attacker was charged and sentenced to 33 years in prison and she sued Payless and won for negligence.

7. Her Favorite Thing About Dwyane Wade

In an interview with Men’s Health, Union said one of the things she loves most about her husband Dwyane is that he is constantly assuring her of his feelings. She doesn’t need material things, but rather a few sweet words or, better yet, some nice quality time together. “For me, time and effort mean more than anything. My finace [Dwyane Wade of the Miami Heat fame] doesn’t leave the house or go to sleep at night without telling me he loves me. Even in the middle of the season he finds time to cuddle up with me, if only for a couple of minutes,” she said. In an interview with Ocean Drive she also said she loves that he understands her need to lead a separate life from him and be her own person: “He appreciates my independence, and my high credit score, and the fact that if I want a Chanel bag, I’m not asking for his Amex; I’ve got my own.”

Even though Dwyane Wade is a professional athlete who signed a $47 million deal with the Chicago Bulls, Gabrielle Union was adamant about protecting her own assets before they tied the knot in 2014. She wanted to make it clear that she and Dwyane made their own money, “I make sure to let people know all of the hard work that’s gone into my career. Now that it’s time to get married to a man who happens to play basketball and has done well for himself, I want to make it clear that I have in no way hitched my wagon to his star. I have my own wagon and star,” she said. When she was on The Arsenio Hall Show in 2014, Union explained why she made her then-fiance sign a prenup before they got married. “For this marriage, the biggest difference between this and the last marriage will be a prenup, at my insistence. When you have your own stuff, you don’t need to worry about anybody else’s stuff…The reality is, I’ve never seen Dwyane balance a check book, so I got to protect my stuff. It’s the wave of the future. Protecting your stuff,” she said.

Since marrying her now husband, Dwyane Wade, Union has said that she’s received a lot of societal pressure to become a ‘mom.’ In an interview with Redbook, she opened up about her struggles with fertility and how it makes her feel that she doesn’t have children of her own. “So far, it has not happened for us. A lot of my friends deal with this. There’s a certain amount of shame that is placed on women who have perhaps chosen a career over started a family younger. The penance for being a career woman is bareness. You feel like you’re wearing a scarlet letter,” she said. Despite rumors that the couple are doing IVF, Union told The Today Show that is not a route they are pursuing.

We’re all envious of the fact that Gabrielle Union seems to have escaped the curse of aging. She doesn’t look a day over 25! In an interview with Elle she divulged a few beauty secrets, but her biggest and most effective was the she drinks a lot of water. She drinks a gallon of water a day. “The biggest thing that has changed my life, the best anti-aging secret weapon, is that in my mid-thirties I started drinking a gallon of water a day. It’s made a tremendous difference with my hair, skin and nails. Everyone is always like, ‘What did you do differently than everyone else? Why are you aging so slow?’ It’s something that everyone has access to and it not only helps with your beauty, it also helps with your fitness and digestion,” she said. Gabrielle Union is also extremely low maintenance when it comes to make-up. “On my own time, I don’t wear much — just mascara so I look awake, and lip gloss. I’m minimalist out of necessity. If it’s between sleep and doing a full face of makeup, sleep is going to win. The way I schedule my life, I have about five minutes [to get ready].”

3. How She Became an Actress

It’s clear from Gabrielle Unions background that she wasn’t intending on becoming an actress. In fact, she’s said on multiple occasions that the driving force behind it was money. In an interview with Basketball Insiders, they asked when she became interested in being an actress, to which she replied: “When I made money! It wasn’t for the love of it initially, it seemed like a great way to delay adulthood for a while. I started while I was still in college. I kind of always looked at it like, ‘Well, I could always go to law school.’ That was my plan back then. But I was making $6.60 as the book buy back supervisor at UCLA, so I thought, ‘Let’s see if I can make more than that!’ And pretty quickly, I was like, ‘Ah, I can make a living doing this.’ So I never looked back.”

2. Marriage for the Kids

Gabrielle admits that she and Dwyane got married when they did because they wanted to create a family for his children. “D and I could have gone on for a long time as boyfriend and girlfriend, but the kids were the driving force in wanting us to be a legitimate, like, real — and I’m using my finger quotes — family in their eyes. We got on board with it, and it’s the best decision we could have made — not just for us as a couple, but for a family,” she said in an interview with Ocean Drive. The happy couple suffered quite a bit of controversy in 2013 when it was discovered that Wade fathered a child during a break in their relationship. Despite learning this news, Union decided to move forward with their engagement. Union is a stepmom to Wade’s three children from a previous relationships, Zaire, 15, Zion, 9, and Xavier 2.

It’s important for couples to be supportive of each other, but Gabrielle Union takes it to a whole new level! The Being Mary Jane star has been banned from sitting courtside at any of his games because she heckles too much! She’s been known to heckle the opposing team and even Wade! Union told Conan O’Brien that she now has to sit a few rows back because she’s too distracting, “That got killed when I became too vocal. He was like, ‘We’re going to need you to sit a few rows back because I can hear you.’ I’m like a dance mom: ‘Plie! Plie!’ I’ve become like Bobby Knight and like the Great Santini — it’s bad. I scream ‘brick!’ and ‘air ball!'” When O’Brien told her she didn’t sound very supportive, but she defended herself by saying: “Who’s going to tell him if not me?” and said she also heckles the players on opposing teams. 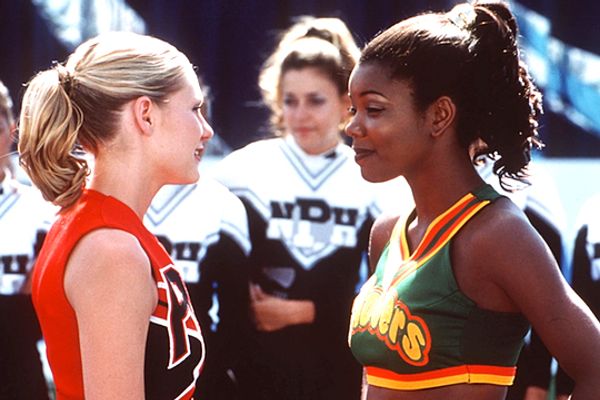 Things You Might Not Know About ‘Bring It On’