Ben and Erin Napier are HGTV’s newest stars with their show Home Town which revolves around restoring old homes in the small Southern town of Laurel, Mississippi where they live. It only has one season under its belt, but Home Town has already become a huge hit and has been renewed for a second season. One of the biggest draws of watching this show is to see the cute relationship between Ben and Erin Napier, which reminds us a lot of Chip and Joanna Gaines! In celebration of their success, here’s a look at 10 things you probably didn’t know about Ben and Erin’s relationship!

Ben and Erin Napier met while attending Jones County Junior College and later Ole Miss University. They refer to the week they met as “love week” and treat it like an anniversary. Their relationship blossomed while they worked on the Yearbook committee together in school. Erin was a designer for the committee and Ben was voted in as one of the honorees. Erin volunteered to work with Ben and. after a few hangouts, they were both hooked on each other!

9. They Both Crushed on Each Other

According to Erin, she had a crush on Ben for about a year before they actually met. “He was the guy on campus that everyone knew, and I just wanted to be his friend.” Ben then sounded off his version of their fairy tale: “The first time I met Erin was in the cafeteria at Jones County Community College. I was talking to a group of girls and they said, wow, I love that girl’s style. I turned around and Erin had this really short pixie cut and she was wearing these loose-fitting jeans and it was like, oh man, she was so cool. From that moment on I was hooked.” Sounds like it was love at first sight!

Any fan of their show or follower of theirs on social media has probably noticed there’s a big discrepancy in height between Erin and Ben Napier. Ben is 6-feet-6-inches while Erin is 5-feet-5-inches, so Erin has lovingly nicknamed Ben, “Big.” In many of their interviews on Home Town, Erin stands on a box beside her husband to help compensate for their height difference.

7. How They Landed Their HGTV Gig

After an ordinary day that turned out to be not so ordinary, Ben and Erin received an email from an HGTV executive at 10 p.m. at night which basically complimented them on their Instagram and asked if they were interested in doing TV. Afterwards, the two had several Skype interviews and even created a 5-minute episode for the network to decide they were in fact the future stars they were looking for and, in December 2014, they were awarded their own show! Fellow HGTV stars Chip and Joanna Gaines quickly became the couple’s mentors.

In December 2016 they reopened an old store called Laurel Mercantile Co. The shop originally operated in downtown Laurel between 1901 until the 1930s. Sticking to their agenda of revamping the small town of Laurel, Missippi, the married couple scooped up the old shop and had it up and running again. The store only sells American-made goods with everything from home decor, to clothing and even wood products. They even design their own products and seek out American factories to produce them. It’s definitely a unique, all-American experience!

Not many couples are able to work together outside of their home. Ben and Erin spend literally 24 hours a day together, seven days a week, especially since they started filming their own show together. Their secret to success is communication. “We communicate everything. If we disagree, it’s on the little things. And if it’s form-related [on a house], then I’ll usually defer to Erin. If it’s function-related, then she’ll usually defer to me,” said Ben to E!

There’s a lot of impressive features about Erin and Ben’s home that just oozes rustic Southern charm, but one of Erin’s favorite things is their book collection and this is because of their cute proposal story. “My favorite thing in our house is all of our books. Ben proposed to me in a bookstore and each of us has like 15 books on our nightstand, so they’re really special to us. The books you’ve read explains a lot about who you are,” she said.

Ben and Erin have been married for nearly nine years! They tied the knot on November 22, 2008 when she was 23 and he was 25. In a journal post published on their website in celebration of their eighth wedding anniversary, Erin wrote: “In this weird and busy season of our life, I’m endlessly grateful for a marriage that has come easily for us. I feel like we’ve always understood each other in the most fundamental ways, which made disagreements rare and partnership in every decision easier. Being married to you feels as natural as breathing in and out, and to be loved and protected by you is the joy of my life.”

Every couple has their traditions and the Napier’s are no different! Each year Ben makes Erin a book for their anniversary. The covers of these books vary each year based on a different theme, whether it be paper, cotton, leather, flowers, wood, iron, wool or copper. Inside he jots down the best things about every month of their marriage from the past year, and signs each passage with “I love you.” He’s now made her nine different books — the first one came in 2007 when he proposed to her.

According to Ben, he knew he wanted to marry Erin after only six days! “It took six days. I hugged her for the first time on a Tuesday, at the yearbook meeting, and we spent every minute that we could together for the next six days. Then I told her that I loved her and that I was going to marry her one day,” said Ben in an interview with E! 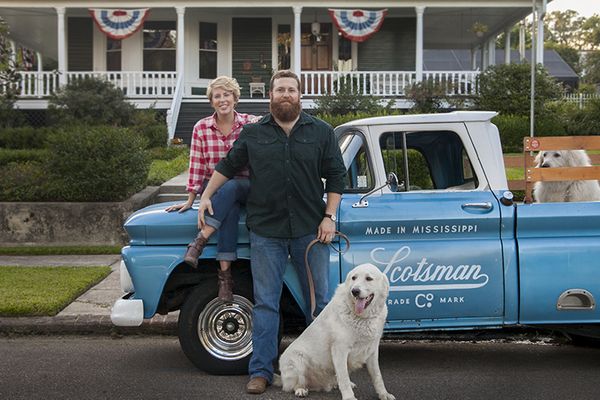