The show revolves around married couple Ben and Erin Napier, a woodworker and an artist who live in the small Southern town of Laurel, Mississippi. Home Town is a show dedicated to their life passion which is restoring old homes in Laurel. Ben and Erin welcome newcomers, help them find a home and then renovate it into a dream turn-of-the-century house. Home Town has been a huge hit for HGTV. It premiered back in March 2017 and has already been renewed for a second season! Here are 10 things you probably didn’t know about the show!

It was just another ordinary day for Erin and Ben until they got an unexpected email at 10 p.m. in July 2014 from an HGTV executive which read, “I’ve been stalking your Instagram for a long time, and I’m in love with your town, your business, and your love story. I think there’s a show there. Have you ever thought about doing TV?” Of course, the thought had never crossed their minds, and even though Erin enjoyed sharing their journey on social media, she never thought “the eyes of a network like HGTV might be watching!” Erin and Ben went through months of Skype interviews and created a 5-minute episode for the network to watch and make their decision on whether or not they liked “the talent.” In December 2014 they got the news that they were going to get their own show!

The HGTV executive who discovered Erin and Ben is the same executive who works behind the scenes on other HGTV hits like Chip and Joanna Gaines, Fixer Upper, and Scott and Drew’s Property Brothers. Lindsey Weidhorn said she discovered the Napiers after Southern Weddings shared an image of their house on Instagram.

Erin and Ben focus their attention on renovating old rundown homes in Laurel with the hope of revitalizing the town. Each episode begins with the couple welcoming a new family to town and helping them find their perfect house. Keeping up with the idea of reviving their historic little town, Erin and Ben do a lot of treasure hunting in their town and give back to the community in a huge way by only using local artists and business owners for their projects. For example, they design their own products, but have American factories produce them. “We’re focused on revitalizing a small town in America. And if we’re going to be serious about that, we have to be serious about supporting American factories because that’s what those small towns depend on,” said Ben.

Once a house is chosen, Erin does a sketch of her design ideas. So instead of using the 3D rendering program that Joanna uses on Fixer Upper, Erin uses her artistic talent to give clients a storybook illustration of what their home will look like when its finished. “Then we gather a team of local expert craftsmen, architects and builders and make it their dream home while bringing them into the fold of our quirky, funny neighborhood,” said Erin.

6. Their Backgrounds Aren’t In Renovating

While they’ve proved they definitely have a knack for renovation and design, Ben and Erin don’t have a background in renovation. Erin’s point of interest is in art and graphic design, while Ben is an experienced woodworker. Their main source of income is from their general store, Mercantile Co., which sells unique, Southern-made goods and products like Ben’s handmade wood furniture and goods.

Designing a home for someone can be pretty personal, so in order to make sure they get an accurate depiction of what their client’s taste is they have them fill out a detailed questionnaire that covers everything about their taste, favorite childhood memory, book and what their perfect day would look like. “If someone tells me that their favorite book is Alice in Wonderland, that can be a game changer by telling me the person is a bit whimsical,” said Erin. “I can afford to be a little fun with the color or what we do in the house. It’s determined by who they are instead of what they like. If you design a home around what people love, it will look just like them.”

Home Town has been described as the Gilmore Girls of HGTV. The small town vibe of Laurel reminds many viewers of their favorite show, Gilmore Girls, and the cozy fictional town of Stars Hollow. Ben and Erin definitely don’t mind this comparison! “A lot of people have said it’s like if Gilmore Girls was a home renovation show, which I’m a big fan of. That sounds really good to me,” said Ben. “When they first said that, I was like that doesn’t make any sense. Stars Hollow is in New England and we’re in the South. But it’s very much the characters in the town. And everybody has those characters in their home town.”

3. Chip and Joanna Were Their Mentors

There have been a lot of comparisons drawn between Home Town and Fixer Upper, but the shows are much different in a lot of ways. There’s definitely no competition between the HGTV hosts — Erin and Ben were happy to have Joanna and Chip as their mentors while going through the process for the first time. In February 2015, the Home Town couple traveled to Waco, Texas, after filming their pilot to spend some time with the veteran hosts. Erin revealed some advice she got from Joanna: “The biggest piece of advice I’ve taken away from them is to keep our marriage and our family first — the stuff that’s been important to us all along — and as long as you do that, you’re going to be fine.”

2. Everything on the Show is Real!

In an interview with Hooked on Houses, Erin said there is absolutely nothing scripted about Home Town or Fixer Upper for that matter. The couple wear microphones all day long that record all their conversations and they are required to do “on the fly” interviews after every scene. Producers use this opportunity to ask specific questions that will get an interesting response. She also mentioned that reveal day on the show is the longest, most exhausting day for them. “It’s hard to be really enthusiastic while discussing (and repeating) design ideas for hours on end,” she said. But we’re sure the clients smiles at the end of the day make it all worth it!

One of the biggest draws about this show is seeing the adorable relationship between Ben and Erin. Married for just under a decade, these two met way back in college while attending Jones County Junior College, and later Ole Miss. They refer to the week they met as “love week” and treat it like an anniversary! The reality couple got married in 2008 and purchased Erin’s dream house, a little yellow cottage she’d admired since she was a little girl in her hometown, Laurel, Mississippi. 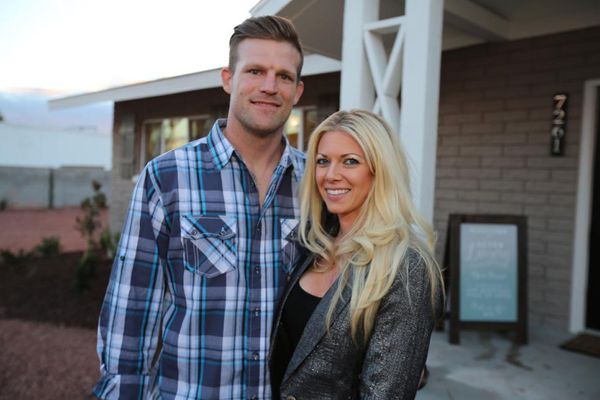