Katherine Heigl and Josh Kelley have been together for over a decade now. Even though her career kind of imploded a few years ago, the one that’s still intact is her marriage and her family life. Since it’s their tenth wedding anniversary, we’ve collected 10 things that most people don’t’ know about their relationship, from how they met to how they keep their relationship on track:

They met back in 2005 when she played his love interest in his music video for “Only You.” She was hanging out with John Mayer around the same time that they met and since Kelley was playing hard to get, she used Mayer to make him jealous so that he would commit to her. “These musicians, they are competitive and jealous of each other. [So] over the phone, because he was on tour, I was like, ‘Josh, I’ve got to be honest. I just want to know where we stand because if not, I might try to pursue something with John,’” she said during The Meredith Vieira Show. “[I confessed] probably a year into our marriage. I was like, ‘You got played!’” To his day, Kelley has trouble believing that nothing ever happened between Heigl and Mayer.

9. Deciding to Get Married

Katherine was the who suggested marriage to Josh. “I didn’t propose to Josh – but I suggested strongly that he should propose to me. One day we were sitting in my house, chatting and having a glass of wine, and I said, ‘How do you feel about marriage? Where do you feel this relationship is going? Because I don’t just want to date anymore,” she told Monsters and Critics. He proposed in June 2006.

They were married in Park City, Utah, on December 23, 2007. The ceremony took place in a private tent at the Stein Eriksen Lodge. The nuptials only lasted for 30 minutes and were officiated by Unitarian minister Tom Goldsmith. The TV actress turned movie star wore a custom-made, ivory silk Oscar de la Renta gown and walked down the aisle to an acoustic song written by Kelley. Her Grey’s Anatomy co-stars, T.R. Knight and Sandra Oh, as well as Grey’s Anatomy turned Private Practice star Kate Walsh attended the ceremony.

I know after almost 11 years I may occasionally take my bad ass husband @joshbkelley For granted. But then, in the middle of an ordinary morning. Cups of coffee in our hands. Children running around like maniacs. Dogs barking. Emails pinging. Phones ringing. Time will stop and I’ll look over at my sexy, giant hearted man and remember. He’s mine. I’m his. And I am grateful. I may not be able to get the guitar out of his hand…but I’m ok with sharing. #thoseheavenlydays are more heavenly, more meaningful when shared with your one true love.

7. Didn’t Live Together Before Marriage

Before they were married in 2007, the couple chose not to live together. “I think what it came down to was tradition – honoring our parents, honoring their history, taking it seriously. I also didn’t want to live together before we were married. I still have enough Mormon in me – not a lot, but enough – that I wanted to keep that a little bit sacred,” she told Vanity Fair. When they finally did live together after they were married, it was quite a shock since they both had very different habits. “I’m not going to lie – it was rough when we finally moved in together. It’s the simple stuff everyone talks about. I like things neat, he leaves things everywhere,” she told Marie Claire.

In 2014, the former Grey’s Anatomy star told Us Weekly about a rough patch she and her husband went through. “It wasn’t a lack of communication. It was just a lack of hearing, and it was assuming what the other person meant and needed or wanted,” she said. “He’s kind of my best friend [but] when it starts to become too much of a friendship and not enough of a romance, that can also be a problem.”

5. Her Secret to Keeping the Relationship on Track

These two have been together for years now and Katherine knows just how to keep their relationship on track. “I laugh at all his jokes. I think he’s really funny, so then he really loves me, because I laugh at all of his jokes,” she told Us Weekly. In 2017, she told E! News that the key to a long-lasting relationship is a friendship. “I think honestly, that we just are really good friends. I think this is the first relationship where I’ve felt like my partner’s more than just my lover, if you will, and is a friend as well. We’re sort of best friends, we get along really well, we have a really good time together. We have our moments, like any couple, so we just sort of cling to that friendship when stuff gets hard,” she said.

4. She’d Forgive Him If He cheated

According to the 27 Dresses star, she would forgive her musician husband if he ever cheated. “Josh and I always said that cheating would be a deal breaker; there is no second chance,” Heigl told Cosmopolitan UK. “But I’ve seen friends and acquaintances go through it and they’ve found a way back to the relationship, and a way to forgive each other. As much as I would kill him if he cheated because it would destroy me, I have started to question whether, if a mistake were to be made and it was a one-time thing, I would forgive him.”

3. They Live in Utah

The couple used to live in L.A., but they chose to move and settle on a ranch in Utah about an hour away from Salt Lake City. They have lots of animals, including eight dogs, three cats, two donkeys, two pygmy goats, 10 chickens and nine horses, plus two miniature horses. “Josh and I are into this quiet life,” she told Good Housekeeping. “Neither of us likes the traffic and the chaos of Los Angeles. It’s overwhelming.”

They have three children together, two that they adopted and one biological. They adopted Naleigh in 2009 from South Korea and then in 2012 they adopted Adelaide in Louisiana. In 2016, they welcomed their first biological child, a son named Joshua Jr. According to Heigl, they aren’t done expanding their family. “I still want more children,” she told People. “I’d get pregnant again, and I still am very inspired by adoption. I also have been thinking a lot about fostering.”

Well that was fun! I’m a day late with these but I had to share! Halloween was a blast and my kids costumes were amazing! Thank you @inbalcarmistudio for the heirloom worthy costumes! We LOVED them!! You are a seamstress genius and I can’t wait to pick next years costumes from your incredible #Etsy shop!

According to Katherine, she and Josh have amazing chemistry in the bedroom. “It’s always been pretty phenomenal, but I think our sex life is 10 times better than it was,” she told Cosmopolitan. “We understand each other better. It’s just a whole different ball game. You feel sheltered in the moment, whether you’re being wild and crazy and you’re doing your striptease…or it’s just more mellow.” 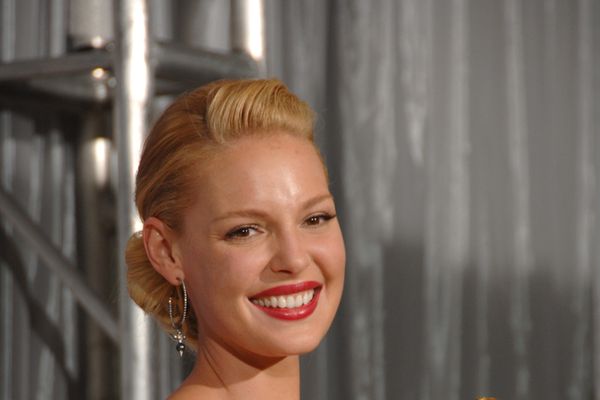