Matthew McConaughey is one of the hottest actors in Hollywood – both in terms of looks and career. Ever since he first launched his career back in the early ‘90s, women have been drooling over him. With that blond hair, those blue eyes and ripped abs, who doesn’t have a small crush on him? While it really seemed for a while there that he seemed to destined to do rom-coms for eternity, he managed to totally reinvent himself as a serious actor. Since we all can’t get enough of his good looks, laid-back attitude and his movies, we have 10 things you didn’t know about Hollywood’s hottest actor:

Matthew David McConaughey was born on November 4, 1969, in Uvalde, Texas, to Mary Kathleen, a former kindergarten teacher and a published author, and James Donald, who ran an oil pipe supply business. He has two older brothers, Michael “Rooster” and Pat. His father was a one-time football player. He played for the Kentucky Wildcats and the Houston Cougars college football teams and was drafted in the NFL in the 27th round by the Green Bay Packers in 1953. He was released from his contract before the season began after having never played an official league game in the NFL.

His parents had a tempestuous, but passionate, relationship. They married each other three times and divorced twice. According to the actor, he and his brothers didn’t know that their parents had ever been divorced. “We thought Mom was on extended vacation. I’m not bullsh-ttin’ ya! I don’t think I knew until after Dad died that those two vacations were divorces. They were wild, man. They loved hard,” McConaughey told Elle. They loved so hard that it would get physical. “When they would fight, it would get crazy. “My mom broke her middle finger four times from banging my dad in the head. I’ve seen her stick a water hose in his car and fill it up with water. They pulled knives. I’ve seen tables flip. Furniture broke,” McConaughey told Esquire. After they would go at each other, they would make up, which sometimes meant that they would make love right there on the kitchen floor.

In 1980, his family moved from Uvalde to Longview, Texas. He attended Longview High School, but he spent a year in a year in Warnervale, New South Wales, Australia, as a Rotary exchange student. In fall 1989, he attended the University of Texas at Austin, where he joined the Delta Tau Delta fraternity and graduated in the spring of 1993 with a Bachelor’s Degree in Radio-Television-Film. When he started college, he was interested in studying law, but abandoned the idea after deciding that he didn’t want to become a lawyer.

The Dallas Buyers Club star got his break in Hollywood during his junior year of college. He was at a hotel bar in Austin when he met a casting director by the name of Don Phillips. They got drunk together and then were thrown out of the bar, which was when Phillips told him that he was in town cause he was casting for a movie, the stoner flick Dazed and Confused. McConaughey got the part of David Wooderson, a man in his early 20s who still hangs around high school kids.

Back in 1999, he was arrested in Austin, Texas, for “disturbing the peace.” The police reportedly found him in his home dancing around buck naked while playing on some bongo drums. Police also initially charged him with possession of marijuana and drug paraphernalia, but those charges were dropped. According to him, he still plays bongo drums naked, he just makes sure to close the window when he does it!

After a string of rom-com roles in films like How to Lose a Guy in 10 Days, Failure to Launch, Fool’s Gold and Ghosts of Girlfriends Past, McConaughey made the conscious decision to rebrand himself as an actor. Initially, his plan was to disappear for a while and come back when he was offered a role that showed his acting abilities. Sure enough, 18 months into his hiatus, he was offered a role in The Lincoln Lawyer. It was the kind of role that reminded everyone that he could act. This led to a part in Killer Joe as a lawman who works as a hit-man on the side. Reviews were positive and McConaughey’s rebranding was complete. His phone started to ring again and he was offered roles in Mud, Magic Mike, Wolf of Wall Street, Dallas Buyers Club, and True Detective.

The Oscar-winning actor started losing his hair back in 1999, so he began using Regenix and his hair has never been thicker or healthier. He has some pretty weird ideas about hair. For example, he believes that people should only cut their hair when the moon is full. “If you want your hair to be thicker, cut it when the moon is about to be full – a heavy, full, waxing moon. Do not cut it when the moon’s waning. Right now, it’s 14 percent waxing on, it’s a crescent, so you don’t want to cut now. In about 10 days, the moon’s going to be 94 percent full – that’s a great time,” he said in an interview with Elle back in 2013. “Why do you think that [farmers] plant at certain times of the year? It’s not hippie-dippie stuff. Look, how do they know when you reap, when you sow, when you plant?”

In fall 2016, he returned to his alma mater the University of Texas at Austin to each a film class. He is co-teaching a class with Hunger Games director Gary Ross and university lecturer Scott Rice. McConaughey and Ross planned on taking 30 students behind the scenes of their movie Free State of Jones through recorded videos and one on-campus visit. In spring 2016, he co-taught a similar class and showed students the filmmaking process for the same movie, but students weren’t able to take photos or video and were required to sign nondisclosure agreements because the film had yet to be released.

Some of his major relationships were with celebrities like Sandra Bullock and Ashley Judd, who he both met on the set of the 1996 film A Time to Kill, and Penelope Cruz, who he met on the set of the 2005 film Sahara. He met his wife, Camilla Alves, back in 2006. They got engaged on Christmas Day in 2011 and were then married in June 2012. Together, they have three children together: Levi, Vida, and Livingston.

In an interview with GQ, he revealed that on a family camping trip for his fortieth birthday, he was almost attacked by a ram while he was holding his newborn son. Realizing that the situation would probably land them both in the hospital, he spotted his wife, Camila Alves, behind him and threw his son to her like a football! Lucky for him, she caught the baby. He later found out that he was between the ram and his female lambs, hence why the ram was so angry. 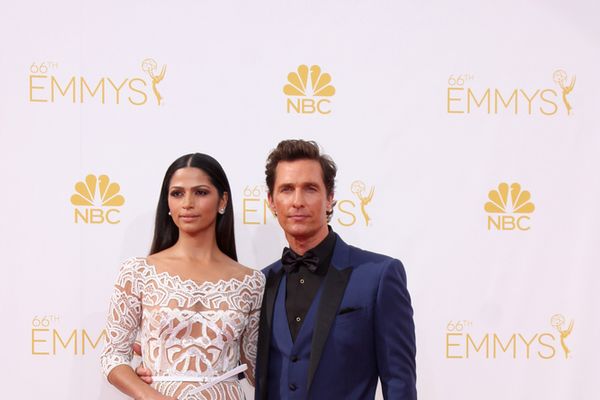