‘Nsync was one of the biggest groups in boy band history. They dominated the ‘90s and early 2000s with their catchy pop songs and their well-choreographed dance sequences. Since 2002, they haven’t released a thing and they have reportedly broken up. The only former member that we hear about now is Justin Timberlake, the group’s breakout star. Since they were such a big deal for so long, here are 10 things you didn’t know about ‘Nysnc:

Chris Kirkpatrick was the first member to be recruited for ‘Nsync. He had missed the cut for the Backstreet Boys, so he met with Lou Pearlman in 1995 to talk about forming another group. Pearlman agreed to finance the group as long as Kirkpatrick found the other members. Joey Fatone was the next one to join. He and Kirkpatrick met while working at Universal Studios. Pearlman found a tape of Justin Timberlake from his Mickey Mouse Club days and he soon joined too. Timerblake recommended his friend JC Chasez, who also was also a cast member of The Mickey Mouse Club. Timberlake’s vocal coach was the one who recommended Lance Bass, who was the last to join the group.

Before Lance Bass joined the group, a young man named Jason Galasso was the fifth member. He was their bass singer, but he dropped out prior to the group signing with Pearlman’s Trans Continental Label. He wasn’t interested in being a teen idol.

The group got the name ‘Nsync after Justin Timberlake’s mom commented how in sync the guys’ singing voices were. The name is also a play on the last letter of the original members’ names: JustiN, ChriS, JoeY, JasoN, and JC.

6. Making it Big in Europe

Like the Backstreet Boys, ‘Nsync was a big hit in Europe before they found success in the U.S. They were signed to BMG Ariola Munich and first began touring in German-speaking countries and then in European territories.

It was in 1998 that they were signed to the American label, RCA; however, they had already released a self-titled album in Europe. Upon being signed to RCA, they recorded some new tracks for the same album to make it marketable in the U.S.

4. Living it up Orlando Style

After Lance joined the group, all five members began living together in a house in Orlando, Florida, which was purchased by Lou Pearlman. Here they rehearsed 18 hours a day, learning dance routines and vocal parts.

In 1998, ‘Nsync sued Lou Pearlman and his record company Trans Continental for defrauding the group of more than fifty percent of their earnings. He had promised that he would only receive a sixth of the profits. The guys then threatened to leave and sign with Jive, which prompted Pearlman and RCA to countersue the group for $150 million and the use of their name. A year later, it was finally settled, and ‘Nsync kept their name and signed with Jive.

When the group initially auditioned for BMG executives, the record company had some major concerns about their name and Lance Bass’ dancing abilities. They wanted to change the group’s name and get rid of Bass, but their manager, Johnny Wright, promised the record label that, once the fans knew the group’s name, they wouldn’t forget it and that they would get Bass up to speed, so they were signed.

Their first concert was a showcase at Pleasure Island back in 1995. To generate interest in the show, Justin Timberlake and JC Chavez’s mothers used their fan mail from their time on The Mickey Mouse Club, made up a flyer promoting “Nsync and sent it out. A few hundred girls ended up showing up. 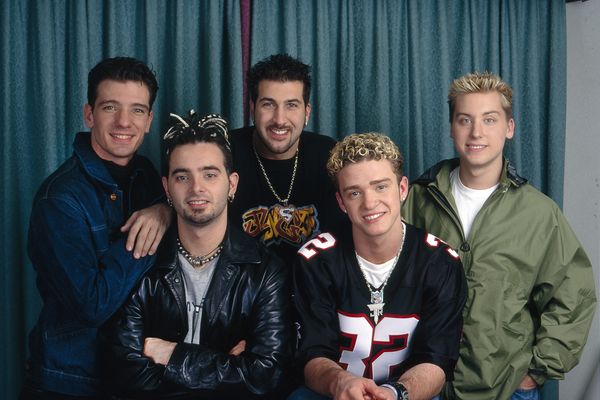