Ariana Grande is one of today’s most popular superstars and by no surprise with the angelic voice she was gifted with! Ariana has grown up in the spotlight and we’ve seen her transition from a Nickelodeon star into a full-blown pop diva in current day. She’s a huge influence in both the music and fashion realm, so it’s always interesting to see how her vision manifests on stage during her album tours. By now, Ariana has definitely established her on-stage style, so follow along as we rank her tour outfit hits and misses:

One of Ariana’s wildly popular tours was when she took the stage for her Dangerous Woman album. It was clear by this point that Ariana had broken out of her child star role and into that of a pop star, which her Dangerous Woman costumes clearly reflect. This look was one of our favorites and began the era of Ariana’s signature over-the-knee boot look.

While we loved many of Ariana’s looks for the Dangerous Woman tour, there were also a few that we admittedly weren’t the biggest fans of. This white look was one of them! The floor-length, oversized jacket really overwhelmed her petite figure, especially in combination with the matching oversized pants.

Ariana’s looks for the Dangerous Woman tour were clearly an attempt to make her appear more mature and adult-like as she shed the child star image. Her stylist Law Roach shared that this black dress look was created one day before the show and was inspired by Audrey Hepburn. “I slept for four hours. It was stressful, but it was exciting. It was awesome,” he explained.

Ariana Grande’s Honeymoon Tour was in support of her second studio album, My Everything. This tour came during the phase where she wore cat ears regularly, which is a style of hers we never really understood. Other than the ears, this look simply consisted of an oversized sweater and over the knee boots, which felt a little lackluster for a tour costume.

Ariana Grande definitely amped up her fashion game when she took the stage for her Sweetener tour this past year. Most of her looks consisted of a mini skirt, crop top and knee-high boots, which she topped with her signature ponytail. While this look would obviously never fly while walking down the street, we absolutely love the bold coral color and heavy hardware for a concert costume.

As much as we love Ariana’s cute and sweet side, we can’t say we were huge fans of this foofy bubblegum pink look she wore during her Sweetener tour which felt a little too childish for our liking. The look also felt and looked quite restricting and didn’t allow her to perform and dance comfortably to the best of her ability.

Cat ears were a common theme with Ariana Grande’s Honeymoon tour in 2015! By this point, it was an iconic Ariana Grande style and one we recognized as her signature. With this look, the cat ears complimented an adorable mini dress that featured a heart-shaped bodice, PVC cutouts, and over-the-knee boots.

As much as we love Ariana Grande’s oversized, active-wear inspired wardrobe, there are simply some outfits that take it a little too far. This orange costume from her Sweetener tour was one of them! The baggy boots paired with the oversized puffer jacket were a little overwhelming when paired together.

Another look from Ariana’s Sweetener tour was this lilac number that featured a frilly skirt, buckled crop top and knee high boots. The look also featured a whimsical, floaty shawl which draped over her shoulders and resembled wings. The look felt very feminine and theatrical, which is why it was one of our favorites of hers from the Sweetener tour.

While we love the edgy leather aesthetic of Ariana’s Dangerous Woman tour, this look was definitely not one of our favorites. The leather look overwhelmed her petite figure and seemed to unnecessarily drown her in fabric. We would have much-preferred something a little more fitted and figure-flattering.

Ariana wore this bold purple costume while performing at Coachella in 2019 and she absolutely stole the show. The deep shade of purple really worked well with her skin tone and the dramatic shoulders and sleeves allowed her to stand out among the sea of dancers. The darker color of this look made it appear powerful and edgy in comparison to the similar bubblegum pink look worn on this tour.

Of all of Ariana’s tour looks, our least favorite was this ensemble she wore for her Dangerous Woman tour. The pants seemed impossible to dance in and weren’t the most flattering to begin with. We much prefer her signature over-the-knee look and cute minidresses! 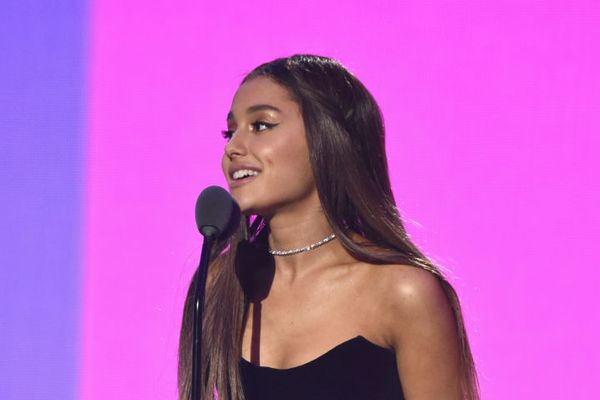 Relatable Ariana Grande Quotes That Will Literally Change Your Life