Scarlett Johansson is one of the biggest actresses in Hollywood. She’s been acting in the industry for over 20 years and has now racked up a long list of credits with some extremely prominent roles in projects like The Horse Whisperer, Girl with a Pearl Earring, Ghost World, Match Point and since 2010 has taken on the role of Black Widow in The Avenger‘s franchise. She is going to be turning 33 soon, so here’s a list of 10 things you probably didn’t know about this beautiful actress!

Born on November 22, 1984, in New York City, Scarlett Johansson attended the renowned Manhattan Professional Children’s School. She graduated alongside classmates like Carrie Fischer and Sarah Michelle Gellar. She started going to commercial and film auditions when she was a little girl, but she wasn’t particularly good at commercials so her mother began limiting her to film projects. This worked out well because she soon got her first film role when she was only 9 in the project, Manny & Leo, alongside her twin brother, Hunter Johansson! Johansson has said that she’s always wanted to be an actress and that she used to put on performances for adults when she was a little kid. “Ever since I was three or four I was very dramatically inclined. I was very outgoing. I loved adults’ attention and I loved to perform. I used to put on shows for my family,” she said in an interview with Express.

Not long after filming the movie, We Bought a Zoo, Johansson did an interview with New York Magazine and divulged what animal she is most afraid of and it might be surprising! “I’m only scared of birds. Something about wings and beaks and the flapping. I’m terrified of them. That still hasn’t gone away. If they’d asked me to put a bird on my shoulder I would’ve done it, but it would’ve been hard. Cockroaches. I cannot stand cockroaches. That’s one thing I absolutely couldn’t do. But that’s not really an animal, is it? It’s an insect…Actually, my uncle is terrified of birds, as well, so it runs in the family,” she said. She also doesn’t like peacocks: “I was terrified of them. Like, ‘Ahh, don’t get too close.’ They’re like, mean.”

She’s been smoking since she was 15-years-old. She couldn’t seem to kick that habit until she got pregnant with her now 3-year-old daughter, Rose. Now that she’s a mother, according to a source at Us Weekly, she very rarely has a cigarette and if she does it’s far away from her child.

In 2016, Scarlett Johansson was named the 10th highest earning actor, out of all males and females in Hollywood. According to the Box Office Mojo, she raked in $3.3 billion at the domestic box office which makes her the highest earning actress in all history! She’s also the youngest actor to ever reach this top 10 list. She was beat out by Harrison Ford, Samuel L. Jackson, Morgan Freeman, Tom Hanks, Robert Downey Jr., Eddie Murphy, Tom Cruise, Michael Caine and even Johnny Depp. Just this past May she discussed the gender wage gap in Hollywood and said: “I am very fortunate, I make a really good living, and I’m proud to be an actress who’s making as much as many of my male peers at this stage…I think every woman has [been underpaid], but unless I’m addressing it as a larger problem, for me to talk about my own personal experience with it feels a little obnoxious. It’s part of a larger conversation about feminism in general.”

Like many other celebrities now, Scarlett Johansson has been the victim of phone hacking. In 2011 she suffered a severe invasion of privacy when her phone was hacked and nude photos from three years prior were stolen and posted on the Internet. The private and personal photos were intended for her former husband, Ryan Reynolds. Instead of cowering in hiding, she called authorities and took charge of the situation. After an FBI investigation, it was discovered that the culprit was Christopher Chaney. He was arrested and charged with multiple felonies to which he pleaded guilty. “It just wasn’t me. It was others. I don’t want to be a victim and say, ‘Oh well’ and just hide my head in shame. Somebody stole something from me…It’s sick. I don’t want people like that to slide. When all those photos came out, of course I go out to dinner and think, Goddamn it, these people have all seen my…That’s terrible. You know what I mean? You can’t not think that. Even if they haven’t, you’re paranoid,” she said in an interview with Vogue.

The media loves to make up nicknames for actors and actresses, especially when it comes to relationships, but the nickname ScarJo, created for Scarlett Johanssen, is something we should drop immediately because she really, really hates it. In an interview with Glamour, she said the nickname is tacky, lazy and even kind of violent. “I associate that name with, like, pop stars. It sounds tacky. It’s lazy and flippant. And there’s something kind of violent about it. There’s something insulting about it,” she said. Johansson also doesn’t like the fact that she’s often labeled as a young sex symbol in Hollywood. “When I made Lost in Translation, I was 17, and now I’m 29…I think I’ve been ‘in my early twenties’ for, like, over a decade! That’s a normal side effect of being a young actor. You’re captured in a certain time of your life, and it’s hard for people to move past that.”

She married French journalist and art collector Romain Dauriac in October 2014 not long after she gave birth to their now 2-year-old daughter, Rose. He manages an advertising company. In an interview with Vanity Fair, she said: “We do different things, He’s in the whole art-scene world. So it’s nice, because we can enjoy each other’s worlds, but we don’t have our crazy conflicting schedules and all that other stuff to contend with. And, you know, of course, actors, in general, they’re obsessed with emotions.” The couple announced that they had separated in January 2017 and then finalized their divorce in September 2017. Johansson was reportedly the one to pull the plug on the relationship after she realized that they didn’t have much in common with regards to their lifestyles.

3. NYU Turned her Down

A lot of people would be surprised to learn that this successful actress was denied admission from acting school! She applied to New York University’s Tisch School of the Arts in 2003, but they turned her down! This allowed her to focus on her career which skyrocketed not long after. She’s come a long way in her career since then! She’s won a Tony Award for her performance in the off-Broadway play A View from the Bridge, received four Golden Globe nominations, won a British Academy Film Award for her role in Lost in Translation and has received many, more nominations and wins throughout her career.

Viewers are used to seeing Scarlett Johansson in front of the camera as a leading lady, but she’s slated to make her directorial debut on an adaptation of Truman Capote’s first novel, Summer Crossing. This will be a much buzzed about project when it is finally released because the novel was thought to be lost after Capote tossed the manuscript in the garbage back in the 1940s. It was rescued by either a janitor or housesitter and was auctioned off in 2004. Johansson has been prepping for the project for years. When asked about stepping behind the camera as a producer she said, “I think for me it’s been, it’s kind of a natural progression. I’ve been working as an actor for over 20 years and I think I find at this stage in my career I often am probably one of the more experienced people in any given production that I’m working on. I don’t mean to toot my own horn, but it just comes with working for such a long time,” she said.

1. She can Play the Kazoo

Scarlett Johansson is not only an extremely talented actress, but she’s also pretty musically inclined! She’s released two albums to date — Anywhere I Lay My Head in 2008 and Break Up in 2009 which was a collaboration with Pete Yorn. She’s also been the voice behind several soundtracks in films like He’s Just Not That Into You and the song “Before My Time” for Chasing Ice which received an Academy Award nomination for Best Original Song! What’s more interesting is that she has admitted she can play the kazoo! In an interview with the Telegraph, she talked about having the title of being an ‘artist’: “I don’t feel like an actor or a singer – I am able to focus wherever my mind wanders. [Recording] is a different kind of creativity. I’m not a musician. I can sing. I can play the kazoo,” she said. 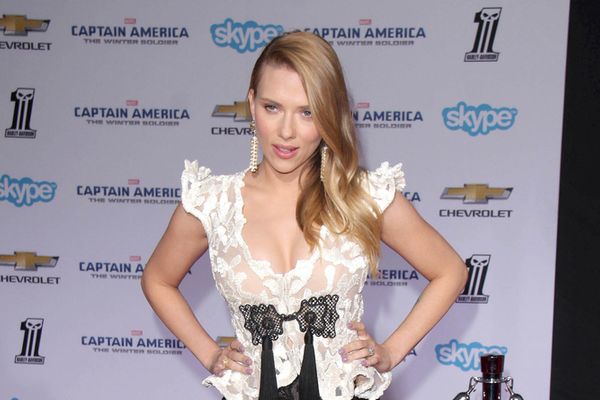