Most of us know about the really famous celebrity-father duos, like Will Smith and his children, Willow and Jaden, or Jennifer Aniston and her dad soap opera star Jon Aniston; however, there a number of stars in Hollywood that aren’t known for being children of famous parents. We’ve tracked down 16 celebrities who you might not know have famous fathers:

Actress Allison Williams is best known for her role as Marnie Michaels on the HBO series Girls and her critically acclaimed performance in the horror flick Get Out, but before this, she was known for being the daughter of NBC Nightly News anchor Brian Williams. Her father isn’t the only family member to work in television. Her mother, Jane Gillan Stoddard, is TV producer, and her brother, Doug, is the late-night anchor of Geico SportsNite. 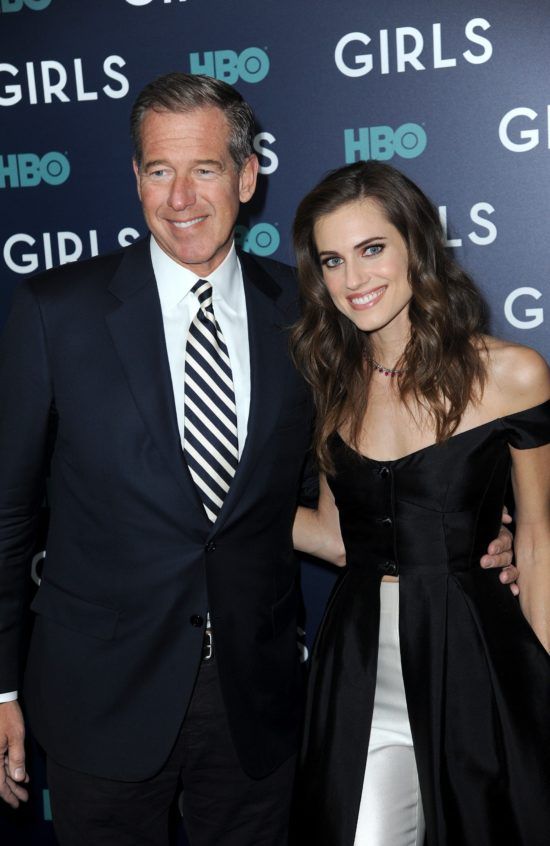 Actress Lily Collins is the daughter of musician Phil Collins and his second wife, socialite Jill Tavelman. After her parents divorced when she was five, her relationship with her dad became tumultuous, which led to them becoming estranged. “Because my dad was often gone, I never wanted to do anything that would make him stay away even longer,” she wrote in her memoir Unfiltered: No Shame, No Regrets, Just Me. “I became extra careful about what I said and how I said it, afraid he’d think I was angry or didn’t love him. And the truth is, I was angry. I missed him and wanted him there.” Now, she and her dad have reconnected and she’s forgiven him for being absent from her life when she was growing up. 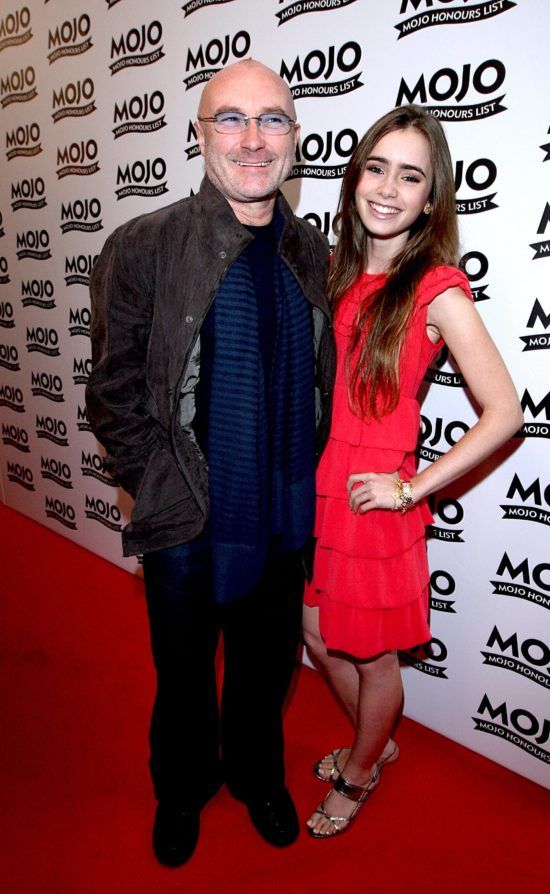 Enrique Iglesias’s father is Julio Iglesias, the best-selling Latin music artist in history. This famous father-son duo has a really strained relationship. Julio has said that he and his son will never collaborate musically and Enrique has revealed that his dad has never met his long-term girlfriend, Anna Kournikova. When Enrique decided to pursue a music career, he didn’t even tell his famous father. He just went home one day with a record deal, which caused his first and only fight with his dad. Julio felt it was strange that his son would become part of the music world without telling him. 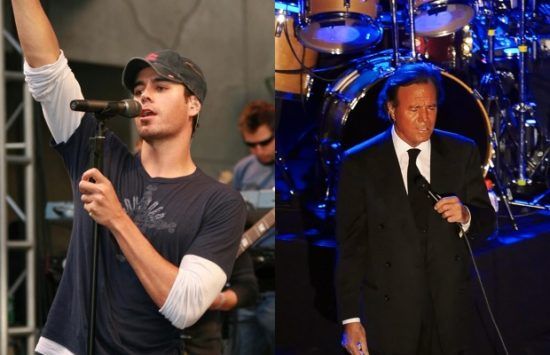 Girls’ star Zosia Mamet comes from a really famous family. Her father is Pulitzer Prize-winning playwright David Mamet and her mother, Lindsay Crouse, is an Academy Award-nominated actress. Her maternal grandfather, Russel Crouse, wrote the book, The Sound of Music, which the movie of the same name is based on. According to Zosia, she had a harder time breaking into the acting world because of her parents. “I think often people have incredibly high expectations, and sometimes people really didn’t want to give me special treatment so they went the opposite way, and were incredibly hard on me,” she told The Telegraph. 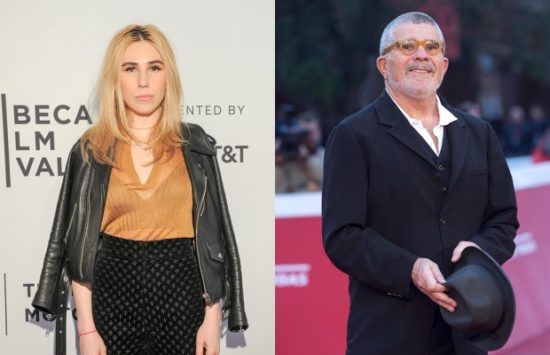 Josh Brolin’s father is actor James Brolin. He starred in the original The Amityville Horror movie, and currently has a role in the TV series Life in Pieces. James is currently married to Barbra Streisand, which means she’s Josh’s stepmom! While James had a moderately successful career, Josh has been much more successful, as he’s been involved in a number of critically acclaimed films and has received numerous SAG nominations, including one win for his performance in No Country for Old Men, and an Oscar nomination for his role in the critically acclaimed movie Milk. 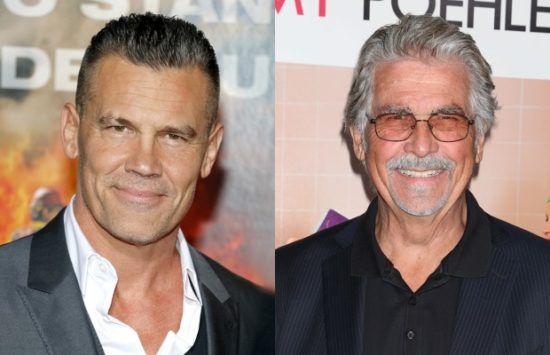 Jeff Bridges’ dad, Lloyd Bridges, was a successful film, stage and television actor who appeared in more than 150 feature films! His brother, Beau Bridges, is also a successful television actor, who has won three Emmy Awards and two Golden Globes. Jeff is the only one in the family, however, to be nominated for several Academy Awards, one of which he won for his performance in Crazy Heart. 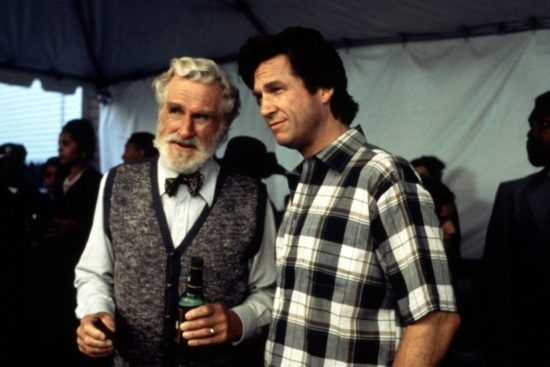 Alexander Skarsgård is the eldest son of Swedish actor Stellan Skarsgård. Like his son, Stellan has also had a really successful career in Hollywood. He’s had roles in The Hunt for Red October, Good Will Hunting, Pirates of the Caribbean: Dead Man’s Chest, Pirates of the Caribbean: At World’s End, Mamma Mia!, The Girl With the Dragon Tattoo, Thor, The Avengers, Thor: The Dark World, and Avengers: Age of Ultron.  Alexander isn’t Stellan’s only son who is an actor. His brothers Gustaf, Bill and Valter are also actors. 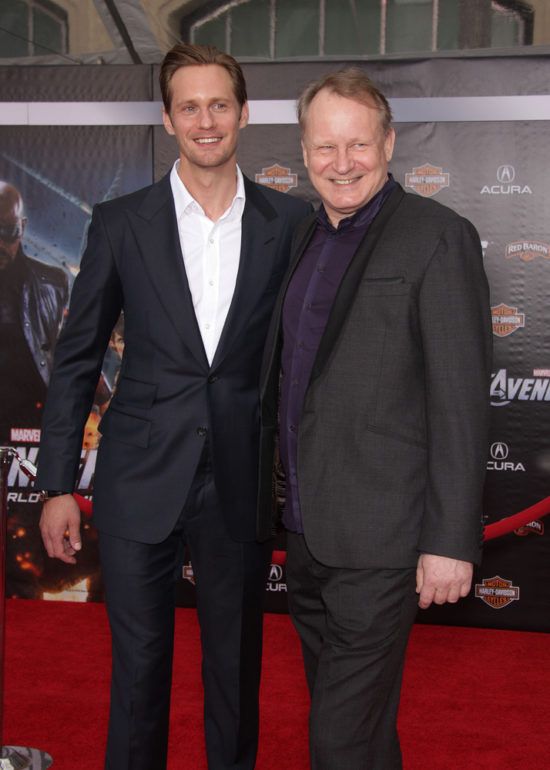 The Law & Order Special Victim Unit’s star’s parents were both famous. Her mother was 1950s-era sex symbol Jayne Mansfield and her father was former Mr. Universe Mickey Hargitay. Mansfield and Hargitay divorced in 1963, and she died in a car crash four years later while Mariska and her two siblings were asleep in the backseat. After the death of her mother, she was raised by her father and his third wife. 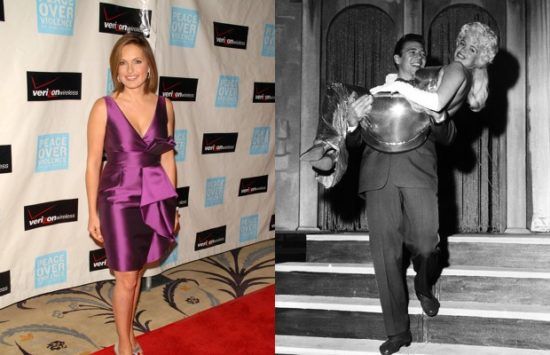 Actress Katie Cassidy’s father is famous and so are her paternal grandparents and paternal uncle. Her dad was one-time teen idol David Cassidy, who starred as Keith Partridge on The Partridge Family, and her grandparents were actors Jack Cassidy and Evelyn Ward. Katie’s been making a name for herself as a modern-day scream queen and a television star. She currently has a starring role as Laurel Lance/Black Canary in The CW series, Arrow. 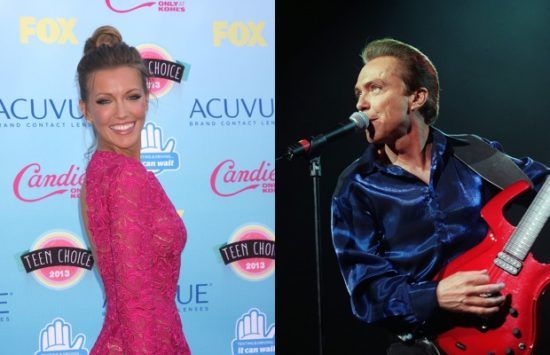 Singer Lily Allen is the daughter of comedian and film producer Keith Allen and film producer Alison Owen. Her brother, Alfie, is an actor, and her third cousin is singer Sam Smith. As a result of her parent’s fame, Lily grew up spending time with her parent’s famous friends, which included former Clash singer Joe Strummer. Lily and her dad, who has a reputation for being a hellraiser, don’t have a particularly good relationship. He walked out on the family when she was only four years old and, when she headlined the Latitude festival in 2014, he was there but didn’t come to see her perform. 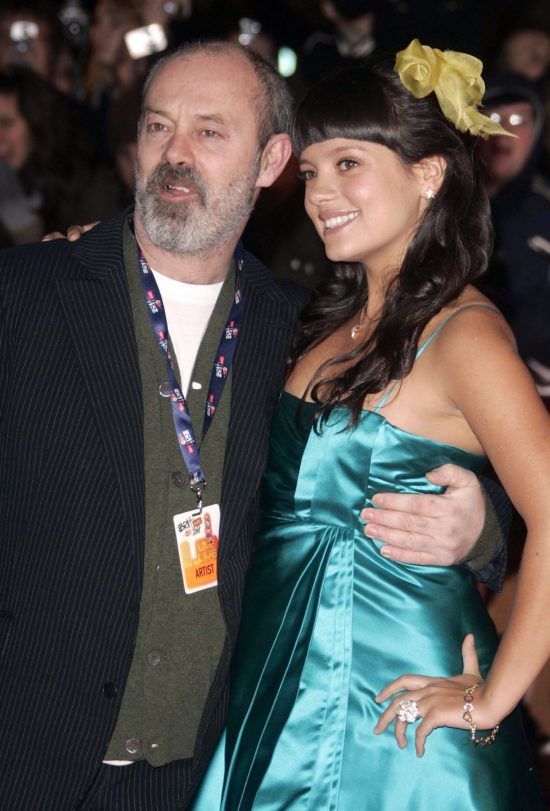 Matthew Broderick is the son of James Broderick, an actor who is most famous for his role as Doug Lawrence on the television series Family, and Patricia, a playwright and an actress. Matthew’s career eclipsed his father’s early on. He became a star during the ‘80s thanks to his role as Ferris Bueller in Ferris Bueller’s Day Off, which earned him a Golden Globe nomination for Best Actor in a Motion Picture Musical or Comedy. 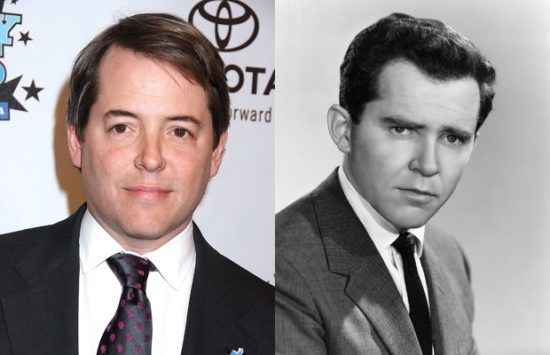 Eva Amurri Martino has two famous parents – her mother, Oscar-winning actress Susan Sarandon, and Italian director, Franco Amurri. Sarandon and Amurri were only having a fling when they conceived Eva and, once Sarandon was pregnant, the relationship ended, and she raised Eva on her own. Eva’s career has never reached the same highs as her mother’s. She’s best known for her roles in the movie Saved!, the TV shows, Californication and Undateable. 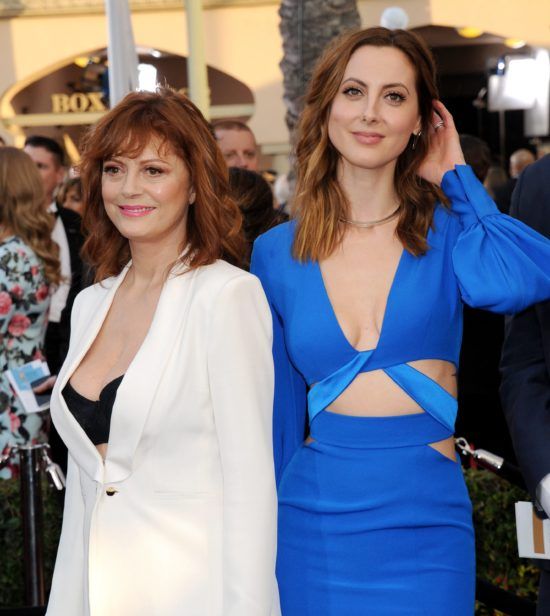 Rashida Jones is the daughter of actress Peggy Lipton – who starred in the TV series Mod Squad – and composer and record producer Quincy Jones. Jones is famous for working with legendary musicians including Frank Sinatra, Michael Jackson, Celine Dion and Aretha Franklin. Rashida has been making a name for herself as an actress. She’s had roles in the TV series The Office and Boston Public, as well movies including I Love You, Man; The Social Network; Our Idiot Brother; and The Muppets. She also earned herself critical acclaim for her role as Ann Perkins on the comedy series Parks and Recreation. 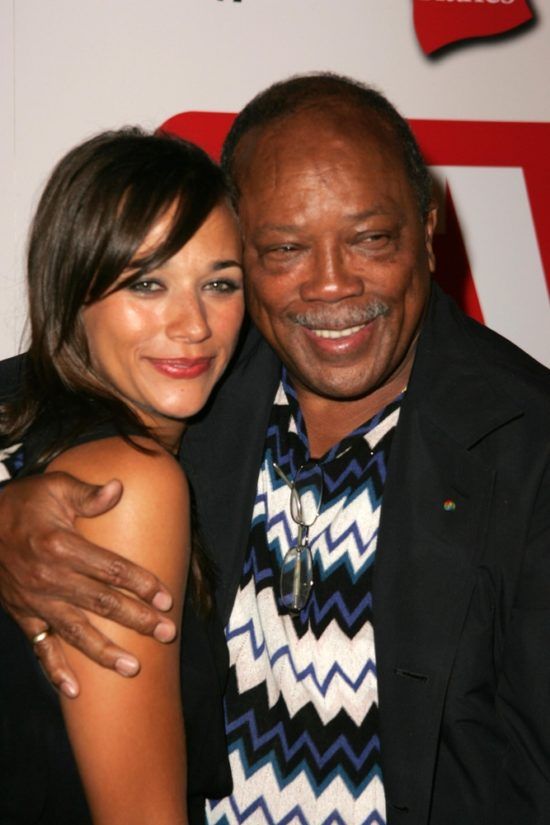 Kristen Stewart’s dad, John Stewart, is a stage manager and television producer who worked for Fox and the Comedy Central show @midnight while her mother, Jules-Mann-Stewart, is a script supervisor who directed one film, K-11. Kristen has totally surpassed her parents in terms of fame. She’s experienced both commercial success, thanks to the Twilight films, and critical success as a result of her performances in Still Alice and Clouds of Sils Maria (which earned her a César Award for Best Supporting Actress). 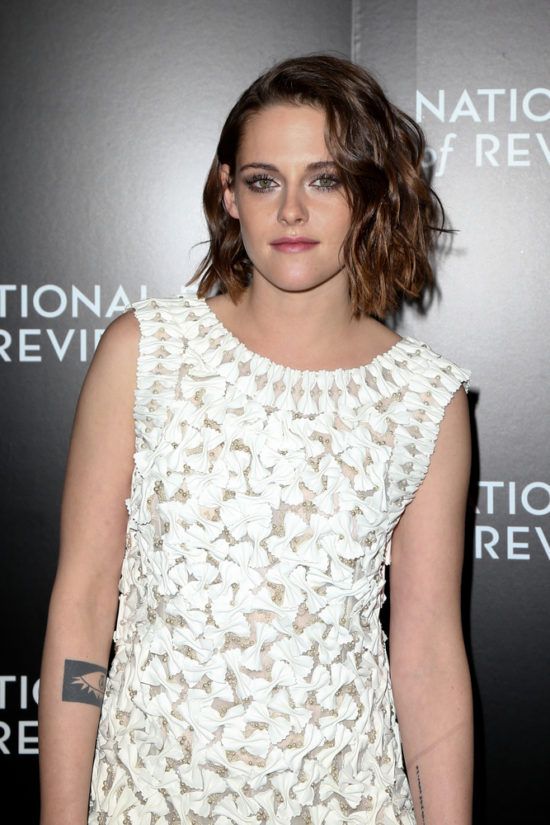 Chris Pine was born into showbiz. His father, Robert Pine, co-starred in the hit series CHiPs as Sgt. Joseph Getraer, in the late ‘70s and early ‘80s. His mother, Gwynne Gilford, was an actress, but she left the biz to become a psychotherapist, and his maternal grandmother, Anne Gwynne, was also an actress. Chris has become a big star just like his dad. He’s had starring roles in the Star Trek reboot film series playing James Kirk and he also had a role in the superhero film Wonder Woman. 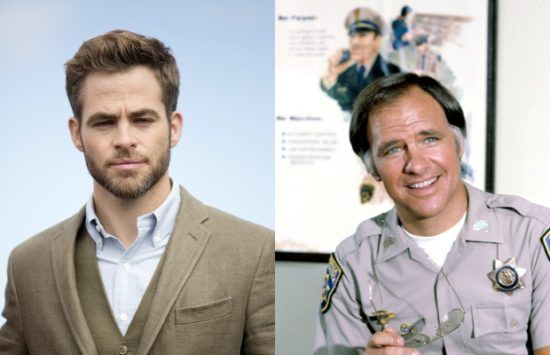 Blake Lively’s parents have both worked in the entertainment industry. Her dad is actor Ernie Lively, who is best known for his roles in Passengers and 57, and her mother was a talent scout. Her brother, Eric, and her two sisters, Tori and Robyn, also caught they acting bug. They all still work as actors, but they are not nearly as successful as their younger sister. Blake and her and her famous dad actually worked together in The Sisterhood of the Traveling Pants and The Sisterhood of the Traveling Pants 2. He played her on-screen dad! 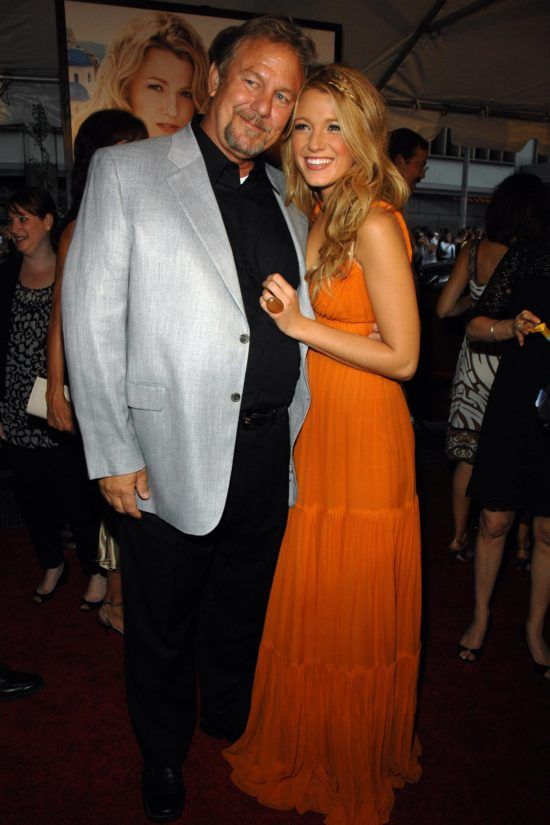 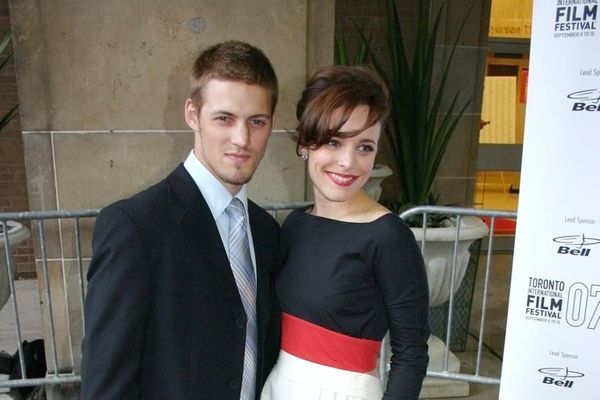