Grey’s Anatomy has become one of the most popular shows on television which is reinforced by the fact that it’s now onto the 14th season! Grey’s already has one spin-off series under its belt, but now fans are waiting for more information on the highly anticipated second spin-off which is set to premiere on March 22, 2018. While not much is known about the show, we do have a few revealing details to share. Here’s a list of 15 things to know about the upcoming Grey’s Anatomy spin-off called Station 19!

For the longest time, this new Grey’s Anatomy spinoff had no title! It was simply referred to as the Grey’s Anatomy spin-off. It seems picking a name for this new show was a daunting task for producers and showrunners. As a joke, many people have been referring to the show as “Blaze Anatomy,” but showrunner Stacy McKee told Entertainment Weekly they are working on it! “You should see the bulletin board in my office. We have hundreds of Post-its on it with possible names. It’s pretty fantastic,” she said. Finally on January 25th, 2018, executive producer Paris Barclay announced that the title of the show will be Station 19.

The show will focus on a firehouse located in Seattle and all the brave men and women who work there, putting their lives at risk to save others. The characters range from a new recruit with a very familiar face, to the captain of the firehouse. “No one can interweave the jeopardy firefighters face in the line of duty with the drama in their personal lives quite like Shonda [Rhimes], and Grey’s signature Seattle setting is the perfect backdrop for this exciting spinoff,” said network president Channing Dungey.

Unsurprisingly, the show is going to join ABC’s famous TGIT lineup which includes also Scandal, Grey’s Anatomy, and How to Get Away with Murder. It will get a two-hour premiere on March 22, 2018, and run immediately after Grey’s Anatomy at 9:00 pm.

The new series will follow Ben Warren as he heads into a new career as the rookie in a firehouse of first responders. “His character seemed like such an organic character to transition into the spinoff especially once we settled on the idea of firefighting and a fire station,” said Stacy McKee at the 2018 TCA Winter Press Tour. “If you follow Ben Warren as a character, he has changed careers a couple of times and he always goes after the thing that he thinks will satisfy himself the most in the moment. And he’s never satisfied if he’s stuck somewhere that isn’t fulfilling him. So, it just felt like a really organic, natural transition. Plus he was playing with fire in the finale of Grey’s last season.”

Many of Grey’s Anatomy fans might have already picked up on this, but the transition for Ben Warren was strategically set up in the season 13 finale when he went out on the quest to rescue Stephanie from the explosion at Grey Sloan Memorial Hospital. In order to create a smooth transition, he will remain a regular cast member on Grey’s until the new series begins in March. His departure raises a lot of questions like how it will affect his marriage to Dr. Miranda Bailey. “What’s really nice is that, for his character, he’s going to be so new to this whole first responder firefighter world in the same way that any of us, our diehard Grey’s Anatomy fans, will be. So if it’s new for him, it’s new for us, too, which will be a really helpful, fantastic way of storytelling,” said McKee.

Since the new series will have a similar format to Grey’s Anatomy, there has to be a leading lady who steers the show! Executive producer Paris Barclay confirmed that Rosewood alum Jaina Lee Ortiz will take on a Meredith Grey-like role as the character Andy Herrera. “It feels amazing as a female, especially a Latina, because we don’t often see too many Latinas getting shows nowadays. Just to have this honor is fantastic,” said Ortiz. “I mean, we’re under the Shondaland umbrella, so females are going to be at the forefront, whatever race, age, size. I’m just happy to be a part of it.”

During the 2018 TCA Winter Press Tour, executive producer and showrunner Stacy McKee explained how this Grey’s Anatomy spinoff will be similar, but different. “It was a priority for me in thinking about this as a Grey’s Anatomy spin-off that it works hand-in-hand with Grey’s and was similar in both tone and intensity and humor and heart,” she said. “But there’s also an added element to this show that a hospital setting doesn’t allow which is that most of our characters are on site and in the middle of action sequences, so there’s a certain level of adrenaline and energy that comes with that that you don’t necessarily find in the same way at Grey’s.”

Since it’s a spin-off of Grey’s, producers expect to appeal to many of their already existing fans who watch Grey’s Anatomy. It’s going to offer the same kind of intensity and drama, but instead of following the personal and professional lives of people who save lives, these are people who also put their lives in danger to save others. Executive producer Paris Barclay described it as having “dinner at your uncle’s, but your mother’s still cooking.” Therefore, we can expect a similar production, just in a different setting. “We want Grey’s Anatomy fans to love this show the way they love Grey’s. We want them to be comfortable,” she said.

7. Firehouse Down the Street From Grey Sloan

We don’t know much about the new show, but we do know that it revolves around a firehouse in Seattle. Since it’s related to Grey’s Anatomy, fans might wonder what the relation is between the firehouse and Grey Sloan Memorial Hospital. Well, according to Stacy McKee, the firehouse is located only three blocks away from the hospital!

Since the firehouse and the hospital are so close in proximity, will there be any character crossovers? We know Jason George, who played the character of Ben Warren, will be leaving Grey’s Anatomy for the untitled series, but can fans expect to see any other character crossovers? McKee assures this will in fact happen but didn’t offer any clues as to how often. “It all depends. The great thing about it is that we exist in the same universe, so there’s definitely the potential to have people or places, in small ways or big ways, and we’re excited about all those possibilities,” she said. George added: “So you’ve got to watch every episode because you never know who’s going to show up.”

In addition to Jason George and Jaina Lee Ortiz, there are several other exciting actors who are set to star in the show. Gary Damon — who many might remember from either Friday Night Lights, True Blood or The Flash — will be playing the role of Lieutenant Jack. Barrett Doss will step in as Victoria, one of the three female firefighters at the station who’s described as “the life of the party.” The third female firefighter is Danielle Savre Stars in the character of Maya, a former Olympic athlete who is straightforward with a dark sense of humor. Viewers will also get to know Okierete Onaodowan as Dean, the bachelor in the firehouse Jay Hayden as Travis, an openly gay firefighter, and Medium alum Miguel Sandoval as Captain Pruitt. Sandoval is supposedly taking on a character who will remind us of Chief Weber because he’s not only a leader but a kind of father figure to the others.

One of the best things about a show is the characters — it’s one of the reasons Grey’s Anatomy has been so successful all these years. According to showrunner Stacy McKee, the characters in this new series will definitely not disappoint! “They’re so fantastic. I’m giddy. They’re really fun, strong, a little messed up, and completely unique in all sorts of different ways. There’s Andy Herrera, who is played by Jaina Lee Ortiz, and she’s this pretty fantastic, badass firefighter, and she’s going to be a real emotional anchor for the show. There’s going to be firefighters from all different ranks, from captain all the way down to the newest probie. It’s a firefighting team of about seven, and three of them are going to be women; we have all ethnicities, all different sexualities. But at the end of the day, it’s just a real family of characters — not necessarily related by blood, but definitely a family,” said Stacy McKee.

In an interview with Entertainment Weekly, McKee talked about how the idea for a firefighter spin-off came to be. “I knew that I wanted to find a show that could match Grey’s in stakes, intensity, and tone. I wanted something where we could be laughing, and crying, and throwing things at our television all in the same episode. I always want to tell stories from characters first, so I just loved this idea of having some kind of big, awesome, hilarious, sometimes dysfunctional work family, and the fire station just seemed to work as a really natural setting for that,” she said.

2. How is the Show Different From Grey’s?

While there are many things about these two shows that are similar, there are quite a few obvious differences which will set them apart. “We go to the accident, we get to run into the fire. There’s just this opportunity for so much more action, stunts and big set pieces like that, which is really, really fun. And a firefighter shift is literally 24 hours long, so you have these characters who are both working together — saving lives together and save each other’s lives together — and living together for a minimum of 24 hours at a time, so they’re all up in each other’s business,” joked McKee. “The very nature of their jobs will put these characters out into the streets, on location, immersed in their patients’ lives in a way that’s a lot more visceral and a little bit more messy. It isn’t the perfectly draped body in an OR. They’re responding to a patient on-site, the scene of an accident, their homes, it’s just a different energy.”

In order to keep Grey’s Anatomy as accurate as possible, the writers will consult medical professionals and it appears this show will follow similar rules. “We basically have the equivalent of that, but for firefighting. We have firefighters and EMTs, who are both on set and consulting on the creative side, so we have a tremendous amount of resources in that way. We’ve also been in communication with firehouses both in Los Angeles and in Seattle because some of the firefighting specifics are regional, so we’ve been trying to make sure that what we do is Seattle specific,” said McKee. 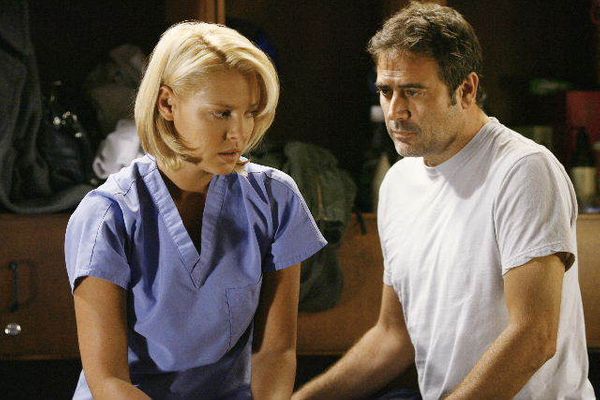