It’s official! After weeks of speculation and rumors, Chris Harrison finally announced on Monday night’s Bachelor in Paradise: After Paradise that Ben Higgins will be the new Bachelor for season 20 of the dating competition reality show. We already know that 27 year-old Ben, who was the second-runner-up when Kaitlyn Bristowe was the Bachelorette, is adorable — but here are 7 things you might not have known about him:

7. He Wasn’t Even Planning to Be the Bachelor

Back when Ben got eliminated, the idea of being the next Bachelor wasn’t really on his mind. “I don’t know, that’s not really for me right now,” he told Us Weekly at the Men Tell All taping in June. “I want to wait until [the offer] is on the table, because I want to focus on the life I had. I’m not extremely comfortable with the attention. That is something I have to figure out. Right now, I just want to go back to the life I had.” Well, he’s going to have to get used to the attention now! Either he was playing coy to throw us off the scent, or perhaps the Bachelor paycheck changed his mind! “It’s incredible,” Ben told Chris on After Paradise. “I think people like me don’t get opportunities like this. I’m excited! Everything leading up to this has just been incredible and I’m ready to get this thing started.”

Although Ben graduated from Indiana University, has some family in Indiana and is based in Wisconsin, his hometown is Denver, Colorado. He’s as outdoorsy as you would imagine: he told ABC that his ideal date would involve “[h]iking back to a quiet place in the woods where we can be alone, but also in nature outside of the normal dating activities.” His Western-ness was also apparent when he liked his country line dancing date with Kaitlyn so much that he went back to the San Antonio dance hall another time after the show was over! Ben will be the first Bachelor to hail from Denver.

Ben volunteers with Humanity and Hope, a charity based out of Honduras. According to its mission statement on its website, Humanity and Hope is an “international non-profit organization that seeks to inspire more hope, generate more opportunities, and create better living conditions, in order to empower the Honduran communities we serve.” He also spent some time volunteering in Peru while he was in college. Ben says that if he could have lunch with anyone, it’d be Nelson Mandela, because he “showed grace and mercy in the end.” Ben explained further: “He is a legend and his grace is something I would like to model.” Ben was also nothing but supportive of Kaitlyn even after she eliminated him. ” I have nothing but respect for Kaitlyn as a person and her desire to take this process seriously,” he wrote on Instagram.

This is when it all started, and dang it was a wild ride. I have nothing but respect for Kaitlyn as a person and her desire to take this process seriously.

Kaitlyn was also supportive of Ben when people started to speculate that he might be the next Bachelor. “I say to everybody. Every girl. Every man. Every dog. Everyone out there would agree with me right now that Ben H. is the man,” she told Us Weekly at the taping of the Bachelorette’s Men Tell All special. Her fiancé was stoked about Ben becoming the next Bachelor, too! Andi Dorfman also chimed in with approval. “I think girls would totally swoon for him,” the season 10 Bachelorette told Us Weekly in an interview. “I think he just seems like a guy with good values and good morals and somebody that’s very pure.”

Ben has a tattoo of a bible verse on his side, and his Twitter bio is “sweetly broken, wholly surrendered,” which are lyrics from a song by Christian artist Jeremy Riddle. Ben was also a student ministries intern at a church in his hometown while he attended college. In his ABC.com bio, he says that being married is “a total sacrifice. Marriage is about a commitment to another person and total sacrifice to fulfill that commitment.” You also won’t be surprised to find out that he’s close to his parents.

Got to spend the weekend with family and watch the final episode with this beautiful lady. She stayed strong and made it through…it can’t be easy watching your son on this journey but she did a pretty darn good job. #momnowknowsIamnotavirgin A photo posted by Ben Higgins (@higgins.ben) on Jul 22, 2015 at 1:45pm PDT

Ben has said on Twitter that he likes “big hugs.” He’s also happy to meet fans: “No need to holla, just quietly and peacefully say hi because I frighten easily, but I do enjoy meeting new peeps,” he tweeted. He urged one user, “Promise you will watch with an open mind, this is real and I am excited to share it with you all.”

In his ABC.com bio, Ben says that his favorite movies of all time are The Sandlot, Crash and 500 Days of Summer. He also named Batman as his favorite superhero, because “[h]e is a badass and has an awesome man-cave to hang out with his friends in.” Makes sense to us! 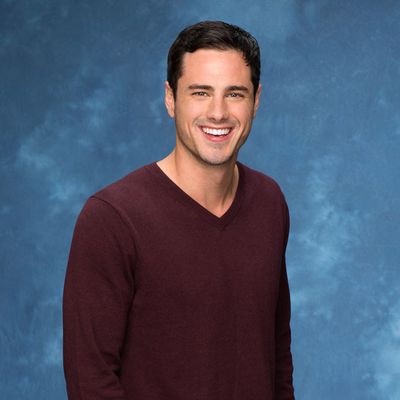