Ashley Graham is the girl on fire! Ever since her Sports Illustrated and Maxim covers, people can’t stop talking about her and her wonderfully curvy body. Over here at Fame10, we’re huge fans as well, which is why we’ve collected 9 things that most people probably don’t know about the voluptuous model.

She grew up in Lincoln, Nebraska, and has two younger sisters, who are both just as curvy as she is. “I was always, quote-unquote, thicker than all my girlfriends,” she said. “And at times in high school I was called ‘thunder thighs.’ But my whole family is curvy, and we’re all confident about our bodies. Our parents taught us that if we weren’t, no one else would be confident in us.”

The brunette bombshell was discovered at the age of 12 while shopping at Oak View Mall in Omaha, Nebraska. When she was 15, she signed with Wilhelmina and then in 2003 she joined Ford Models.

7. From Nebraska to New York City

When Ashley graduated from high school, she immediately moved to New York City to pursue a career in modeling. “I was a Nebraska girl in New York,” she said. “Sex, drugs, and rock and roll, baby. But I was always responsible.”

Before she married her hubby, Justin Ervin, they did not have sex. “I had to reclaim my body, my sexuality and my image. It was the best thing I’ve ever done,” she told Elle.

Ashley met her husband, Justin Ervin, at church. “We come from different backgrounds, but we have the same viewpoints on religion and family,” she said.

She has been featured on the covers of Elle Quebec, London Times, Cover Magazine, Style Magazine and The Edit and has been featured in the Shape Issues of Vogue, Harper’s Bazaar, Glamour and Elle UK. She has also appeared regularly in several Levi’s, Calvin Klein and Marina Rinaldi campaigns, and her list of regular clients includes Nordstrom, H&M, Old Navy and Bloomingdale’s.

The plus sized model designed a lingerie line for Addition Elle, a Canadian plus sized brand, in 2013. She also teamed up with Dressbarn in 2016 to create a line of sleek, chic sophisticated and affordable dresses called Beyond by Ashley Graham.

Ashley gave a TED Talk on body diversity in Spain in May 2015. “I felt free once I realized I was never going to fit the mold that society wanted me to fit in,” she said during her talk. “I was never going to be perfect enough for an industry that defines perfection from the outside and that’s okay. Rolls, curves, cellulite, all of it – I love every part of me.”

She got her start in lingerie modeling. “My first [modeling] job ever was lingerie,” she said. “My mom had to sign a petition that said they would airbrush my nipples out! 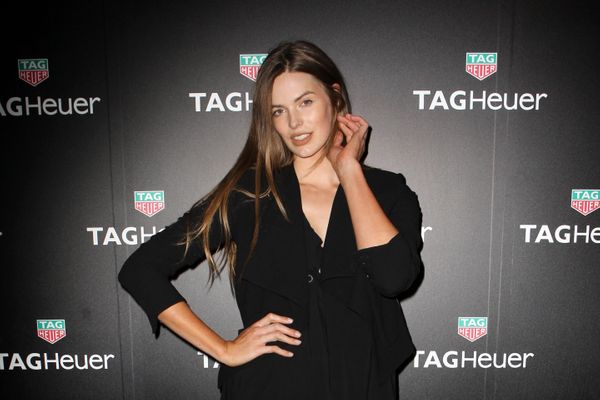