The American Country Music Awards are one of the biggest nights in country music, when Nashville takes over Las Vegas for the night! All of the biggest names gather together to celebrate their close knit genre and honor those who’ve stood out the most. In addition to all those awesome red carpet moments and award handouts, viewers get to watch their favorite artists take the stage to perform their latest hits. Last night’s show saw a whopping 23 performances, but 7 of those stood out above all the rest. Here are the top 7 performances from the 52nd Annual 2017 ACM Awards!

Country music’s newest female vocalist, Maren Morris, might have got lost in the shuffle with her solo performance last night, but when she showed up in the middle of Thomas Rhett’s “Craving You” for a duet, she more than made up for it! Morris had a great night as she walked away with the New Female Vocalist of the Year Award and not that long ago won a Grammy Award for Best Country Solo Performance. She’s had an incredible year, as has Thomas Rhett who won Male Vocalist of the Year and Song of the Year last night! These two absolutely beamed on stage and their back and forth vocals were one of the highlights of the night!

Christian singer Lauren Daigle had the honor standing next to country legend Reba McEntire on stage last night as the two gave a powerful performance of “Back to God” from McEntire’s recent gospel album. The two ladies stood up there alone with nothing else but a back up band and their vocals and let the touching lyrics of the song do all the talking as it left the audience absolutely mesmerized. It was so moving even McEntire was moved to tears at the end!

Lady Antebellum took the stage at the ACM Awards after a short hiatus and made sure their comeback would be one to remember with a performance of their newest single, “You Look Good.” The feel good song brought so much energy to the stage with a mix of country, R&B and a little bit of New Orleans funk. It was definitely one of the more memorable events of the evening just because it sounded so different than anything else we’d heard that night!

He took the country music world by storm when he delivered his first CMA set alongside Justin Timberlake back in 2015 and introduced the world to his incredible talent with the critically acclaimed album Traveller. Since then he’s become one of the most talked about country artists and last night he did a great job of reminding us why! He brought some of that good 0l’ fashioned bluesy rock n’ roll back to the ACM Awards last night and showcased some wicked guitar skills. He offered up a brief taste of what’s to come on his upcoming album with the upbeat single, “Second One to Know.” Of course, his wife Morgane Hayes was up on stage with him keeping the beat with her tambourine and to lend her voice for some back up vocals.

These two are country music’s most beloved couple and by far the cutest duo. Tim McGraw and Faith Hill went up on stage to perform their new duet “Speak to a Girl” and not surprisingly they rocked it. They showed the audience what true love is when they went up there and sang lovingly to each other about the rules of old school Southern charm. In true Tim and Faith fashion, the two shared a kiss onstage after the duet and Hill jumped into his arms. It was the sweetest moment. The long-time married couple have been singing duets together since the mid-’90s, but it’s been a while since they toured together or even joined forces for a duet which is why this single was so special to many country fans. Fans rarely get to hear Faith Hill sing anymore, so when she gets up on stage, and next to her hubby nonetheless, the audience goes crazy for it!

Miranda Lambert took the stage all by herself for a stripped down version of her emotional ballad, “Tin Man.” Her performance took us back to country’s simplicity with just the basics — her voice and an acoustic guitar and allowed her to stand out among all the other acts that evening. This performance alone proved exactly why she deserved to win Female Vocalist of the Year for the eighth time in a row. The powerful breakup song is one of 24 songs of her newest album, The Weight of These Wings, which also won Album of the Year at last night’s ACM Awards.  The song warns the famous Wizard of Oz character who so desperately wants a heart, and just how painful it can be, as she hints at her break-up with fellow country star, Blake Shelton.

There had been whispers that country’s most popular duo, Florida Georgia Line, would be performing alongside the Backstreet Boys for their newest hit which is a collaboration with the ’90s boy band, “God, Your Mama, and Me,” so viewers were eagerly awaiting the performance all night. It was teased throughout the entire show which made it clear it was scheduled to be the biggest performance of the night. Although there was a bit of backlash about having a pop group perform at one of country musics biggest nights, the Backstreet Boys didn’t seem to let it bother them and instead swept the audience with their amazing performance! We’re not going to lie, many of the country artists seemed more excited while listening to BSB perform their 1997 mega-hit “Everbody (Backstreet’s Back)” than they were when some of their peers took the stage! 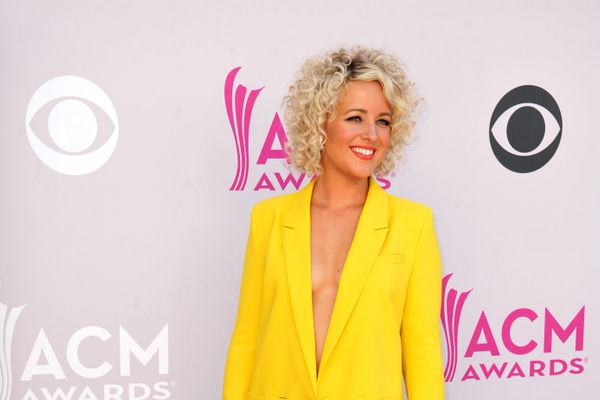