At the Academy of Country Music Awards, stars like to take risks and, while some of these risks might pay off, some of them definitely don’t. We have a list of celebs who obviously need some serious help from a stylist cause their outfits were exceedingly bad. Here are the 2017 ACM Awards’ 6 worst offenders:

Nicole Kidman’s floor-length Alexander McQueen gown really highlighted her amazing figure, but the floral and animal inspired embroidery gives the dress a kind of festive look. Maybe if she wore this to a Christmas party it would feel more appropriate, but this is the Academy of Country Music Awards.

Cassadee Pope stood out in this sheer Yanina Couture gown, which was accented with red blooms, but it wasn’t for the right reasons. It looks like she is wearing a bikini and decided to cover up ever so slightly with the sheer skirt and the floral designs that cover her shoulders and her chest. While we get that she was probably going for something more romantic, the dress was just too revealing.

Lady Antebellum’s Hillary Scott took a major risk last night with this red and blue patterned Proenza Schouler dress, which featured skin-baring panels on the abdomen. While we love how she looks from the neck up, the dress itself is just not up to par. The pattern is way too busy and the style is unflattering. Also, the cutouts just make an already questionable dress that much worse.

Kacey Musgraves wore this strapless, lace, floral-patterned Marchesa gown to the Academy of Country Music Awards. While there some parts of this dress that look nice, one of the big problems with it is that it looks too tight, almost as though she was squeezed into it. The thin black satin choker that she accessorized with doesn’t fit with the dress either. Sorry Kacey!

Chris Lane’s floral tux was definitely not a good idea in theory or in practice. We don’t know what he was thinking with this ensemble. The pattern on the suit is way too busy (and reminiscent of your grandmother’s couch), and why would he choose a burgundy shoes when he was wearing a blue dress shirt? It looks terrible.

Cam rocked this bright yellow pantsuit from Topshop, which featured a plunging neckline. While some people might praise her for being bold and fearless with her choice in outfit color, we think the bright yellow was a terrible idea. This pantsuit is so bright it is practically blinding! 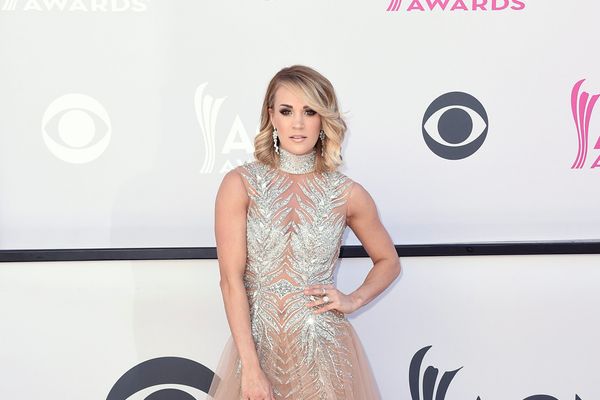