It’s time to get excited because the Gilmore Girls’ reboot, Gilmore Girls: A Year in the Life, will officially be premiering on Friday, November 25, 2016! There will be four 90 minute episodes and each one will focus on one of the seasons, but that’s not all! We have 10 more behind the scenes secrets for the upcoming reboot – check it out!

The show will be introducing several new characters, including a Peruvian couple, a 30-something man named Paul (possibly Rory’s boyfriend?) and an older men’s magazine editor (another potential suitor?). Viewers can also expect to see much more of Michel, played by Yanic Truesdale, this time around. Truesdale suggested to Us Weekly that his character might have a love-based plot line. “That is nice for me as an actor because it gives me a backstory,” he said. “But it gives me meat for the character because he, you know, I definitely have an arc and stuff going on in my personal life that affect the character. So the fans can expect to discover more about Michel.” British actress Alex Kingston has also joined the cast. Her character reportedly has a major part to play in Rory’s life.

The reboot reportedly begins with Lorelai waiting for Rory, who just got off a long flight, with a couple cups of coffee. It looks like Rory has moved abroad, but it is unclear where she’s been living or how long she’s been gone; however, Alexis Bledel has said that Rory has been working as a journalist and is living like a vagabond. “She started her work as a journalist at the same time that newspapers were going away. Her field changed dramatically as she was just kind of getting up and running. So that’s where we pick up with her. It’s real time, so it’s been about eight years that she’s been living a bit of a vagabond lifestyle, kind of chasing each story that she becomes passionate about and wants to tell,” Bledel told Us Weekly.

Although Alexis Bledel, who plays Rory, didn’t reveal who her character is dating these days, she did say that “all of her ex-boyfriends make an appearance in these chapters in one way or another.” “I think everyone’s questions are answered by the end of it, but we can’t answer them today,” she said at the Television Critics Association press tour. Bledel did express some surprise over everyone’s interest in Rory’s love life. “I just think it’s kind of interesting that that’s what people are excited about,” she said. According to her, there’s more to Rory than who she dates, “like her ambition and her accomplishments.”

At the heart of Gilmore Girls has always been the relationship between Rory and Lorelai and the reboot focuses on this too. According to Lauren Graham, expect to see a lot about family and “how these bonds take us through all the different stages of our lives.” “It’s not a story about a little girl anymore who’s in high school – it’s a story of a young woman and all the struggles she faces, and the dynamics between these two women,” Graham added. “They’ve grown up, but they’re the same.”

The section of the Warner Bros. lot that was used for Stars Hollow is actually where they film outdoor scenes for the show, Pretty Little Liars! Stars Hollow High School, where Rory went before she switched to Chilton, is now used as the Rosewood Town Hall and Luke’s Diner is now being used as Rosewood Diner. Hart of Dixie also used Gilmore Girls’ set as well. Sookie’s house was used as Dr. Hart’s office.

Everyone is dying to know whether Luke and Lorelai are together, but Lauren Graham has been cagey about who her character is dating. “She does have a love life,” she said. “I think not all the questions have been answered.” Since we’ve already seen pictures of her character and Luke’s holding hands, we can at least assume that something is happening there, right?

Edward Herrmann, who played Lorelai’s dad Richard Gilmore, passed away in 2014, so viewers will see the characters dealing with his absence. “To me, one of the aspects of the show that felt the same but different, [is] in the wake of losing Ed – which was, and still is, a great loss for us personally – it was also part of our story that we were telling, which was the journey of how everyone is recovering. And that gave the show a depth and emotional complexity, which again to me felt like, ‘Here’s the show grown up even more,’” Lauren Graham said. “And I mention that because it plays into all the choices the characters are making, and sort of what they’re dealing with, in a new way. So through dealing with that, she makes some decisions.”

Scott Patterson – who played Luke Danes on the series – believes that the fan turnout for the show’s reunion at the ATX Television Festival in June 2015 is one of the reasons why the studio decided to give the green light for the Netflix reboot. “ATX was just a fervor,” he said. “It was a veritable frenzy. It might have lit a fire under people.”

The show’s creator Amy Sherman-Palladino – who left the show for its seventh and final season because contract negotiations with The CW didn’t work out – wasn’t happy with the show’s ending. She had a specific way that she wanted the show to end, which included four words. Now that she’s back for the Netflix reboot, we’re finally going to find out what those final four words are! 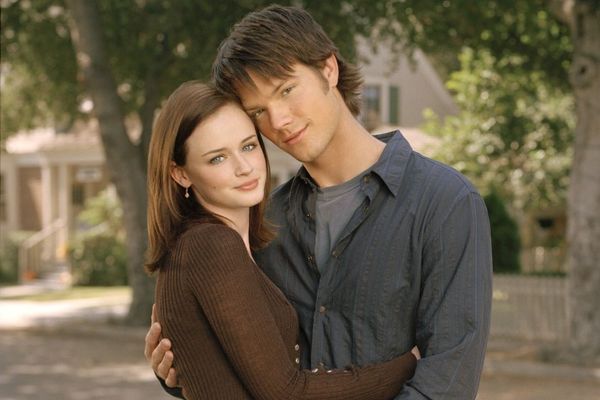