This television series was adapted from the widely popular book series by Cecily von Ziegesar known as Gossip Girl. Initially meant to be adapted into a film, Josh Schwartz (the same creator of The O.C.) took on the project and created another great teen drama. Surprisingly, Gossip Girl didn’t start off with the best welcoming from viewers, but by the end of the six seasons the show had become a total cultural phenomenon it terms of fashion, drama and ratings as it raked up a bigger and bigger fan base. Narrated by Kristen Bell, the series followed the fictional lives of these rich and spoiled adolescents living in Manhattan on the Upper East side, with the exception of the odd hipster here and there, also known as Dan and Vanessa. What was so interesting about this show was that it offered insight into the interesting lives of New York’s elite. The show has been off the air for about four years, and we’ve decided to unearth some fun and interesting facts from behind-the-scenes of Gossip Girl!

During the first few seasons of filming Gossip Girl there were rumored plans in place to give Jenny Humphrey’s character a spin off series that would follow her as she went off to boarding school. The spin-off was supposed to mirror “The It Girl” novel that was adapted from the “Gossip Girl” novel series. Things on television didn’t turn out like the novels though; the CW didn’t pick up the pilot and Taylor Momsen, who played the character of Jenny, left the show to pursue a career in music with her alternative rock group, The Pretty Reckless. She was only 14-years-old when the show started filming! There were also intentions to do a spin-off set in the ’80s focusing on the characters of Lily and Carol Rhodes, but the CW passed on the pilot and it eventually just became part of season 2 on Gossip Girl. It would have featured Brittany Snow as a young Lily and feature younger versions of characters from The O.C. which was also produced by Josh Schwartz and Stephanie Savage. These two love linking up the two worlds.

9. Dedicated to his Role

William Baldwin took his role as Serena’s estranged father very seriously. He insisted on avoiding Blake Lively until the cameras rolled for their first scene together so that their strained relationship could seem more real. The first time we see them in a scene together is their first time meeting face-to-face on set.

The producers of Gossip Girl were very meticulous about making the show seem extremely authentic by exact replications of exact locations in New York City. As a result, the show was extremely costly! It cost between $10,000 and $60, 000 per day to film in New York City. It seems like it was all worth it in the end because there’s now a day dedicated to the show — Jan. 26 is officially Gossip Girl day in New York. This came to be after then-Mayor Michael Bloomberg visited the set and praised how well it showcased the city.

A major downfall of Gossip Girl was the constant revolving door of relationships and interchanging of partners between the characters on the show. It seemed that in real life there were a lot of couples on set! Leighton Meester, who played the character of Blair Waldorf, dated Sebastian Stan, who played the character of Carter Baizen, dated from 2007 to 2010. Also, before joining the cast of Gossip Girl, Matthew Settle and Kelly Rutherford dated and then played the iconic couple, Rufus and Lily on GG. There was also a relationship between on-screen couple Blake Lively and Penn Badgley between 2007 and 2010. Surprisingly, their relationship spawned not only from the show, but they were home schooled together as children. In an awkward scenario twist, their real-life relationship ended while their characters were still involved on the show.

The penthouse of the Van der Woodsens was actually in the Milan Condominiums on the Upper East Side in New York City. After the show finished filming the apartment sold for $6.8 million. Similarly, The Empire is a real hotel in New York City. The Empire gained a lot of fame and recognition on the show, thus it became a hot tourist spot. The hotel decided to capitalize on this and now serves a signature Gossip Girl cocktail called XOXO with a secret ingredient “they’ll never tell.” Another fun tidbit — even though the Humphrey’s are supposed to be poor, the average cost for real estate per square foot in Dumbo (which is where the outer shots of their loft are taken) is about is around $1,400.

Blake Lively was fitted for Serena’s wedding dress the day after her actual wedding to Ryan Reynolds. Costume designer Eric Daman said in an interview with the Huffington Post, “It was really stressful because we were fitting Blake in the wedding dress the day after she got back from her actual wedding. It was like, ‘Oh great, we’ll just put her in a wedding dress. This is really art meets life meets art, this is just ridiculous.’ It was actually a lot of fun.”

4. Blair and Chuck Were Destined

Despite toying with fans for many seasons, executive producer Stephanie Savage and creator of the show Josh Schwartz have said they always knew Chuck and Blair would end up together. Similarly, they always knew Dan would end up being Gossip Girl. “We never really entertained any other ideas of who Gossip Girl was. It was whether we were going to reveal it. Interestingly, in the pilot episode, the test audience thought that Dan was Gossip Girl. We actually had to re-edit one of our sequences. It’s when he’s on the computer looking at Gossip Girl; the way it was edited that he was typing as the voice was coming up, people thought that they were being told that he was Gossip Girl. So we actually had to re-edit that sequence.” This secret was kept tight lipped. Penn Badgley didn’t find out he was Gossip Girl until right before they shot the scene.

From interviews with Stephanie Savage and Josh Schwartz, it seems the producers and execs took great pride in their ability to tie up all the loose ends in the final episode of the series. No stone was left unturned. Take for example the relationship, or exile, of Jenny Humphrey! In the flash forward to Dan and Serena’s wedding in the series finale episode Jenny is seen walking up the stars with a shopping bag that said, “J by Waldorf.” According to Savage, this was very strategically put into the scene to show fans that Jenny ends up landing her dream career and working for Waldorf Designs. “I always loved the idea that Blair would reach out to Jenny and have her become a part of Waldorf Designs. When Jenny is running up the stairs to Dan and Serena’s wedding, she’s using a ‘J by Waldorf’ shopping bag. So it happened.”

Ed Westwick originally auditioned for the role of Nate Archibald, but during his audition, Stephanie Savage said she and Josh Schwartz looked at one another and wrote on the paper in their laps, “Chuck?” But it wasn’t easy getting him to the play the part. The network showed restraint against their choice because they had someone else in mind and to top it all off and Ed Westwick needed a visa in order to work in America. In an interview with Glamour, Savage said, “We had issues with his visa because we were bringing him over from England and didn’t know if we could get his visa in time to work, and the network said we needed to have a backup choice in case it doesn’t happen. We were like, ‘There is no backup choice. He is our choice.’ They said, ‘No, seriously, for insurance purposes, you need to have a backup choice cause if he doesn’t get his visa, we’re going to have to shut down production.’ We were just like, ‘Then put anybody’s name on the piece of paper because this is our guy, and it’s going to work!'” His visa ended up coming through on the day they shot the pilot.

In an interview Glamour, Savage said Blake Lively wasn’t always the fashionista she is now. Today, she’s become a huge style icon, but back when Gossip Girl was first auditioning she was just a girl from Burbank, California: “They way she embraced the fashion world was incredible and a little bit unforeseen. When she did the screen test for the show and showed up with her outfit, every single thing was from Forever 21! So I had a cashmere coat from Barneys and a Lanvin bag that we put over her dress for the screen test to just give more of that Upper East Side feeling. When she went to New York, she just completely immersed herself in that world.” Savage also said that originally execs didn’t want Blake Lively to play the part of Serena because they didn’t think a California girl could be convincing as a New Yorker, but she pulled it off and has evolved into not only a film actress, but a fashion icon. 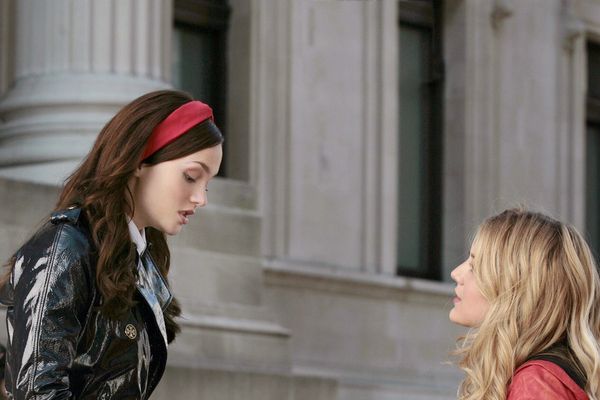 10 Most Memorable Episodes Of Gossip Girl