Through ten seasons, The Big Bang Theory has become one of the biggest and most successful sitcoms in TV history. While its success has meant great things for the series’ core cast, it has also attracted some huge names, especially those link to sci-fi series and the scientific community at large. By now there have been a ton of amazing celebrity appearances and guest stars on The Big Bang Theory, but these 12 were the absolute best! Check it out:

Stan Lee is the master of cameos, and while fans are used to it in his numerous Marvel movies, he couldn’t resist the urge to do the same on TV’s biggest series. After many mentions of the comic book icon, Lee finally appeared in the season three episode “The Excelsior Acquisition,” and as to be expected, his talent for humor was at the top of its game. His reaction when Penny and Sheldon show up at his house unexpectedly was amazing, and resulted in him getting a restraining order against Sheldon, which of course he cherished.

Stephen Hawking was one of The Big Bang Theory’s creator Bill Prady’s “dream guests” long before he finally appeared on season five’s “The Hawking Excitation.” Along with smaller appearances, including where he is just seen on a computer, Hawking has now appeared in six episodes, and provided more humor than anyone could have expected. Hawking has absolutely no problem poking fun at others, and even more surprisingly, at himself! He is even a really good sport about the jokes that are made about him, which just adds to how fantastic his appearances have been.

While several stars have now taken on the role of Batman, The Big Bang Theory decided to go for one of the originals when Adam West made his cameo on the show. West appeared in Sheldon’s birthday episode for season nine’s “The Celebration Experimentation” where he played himself. It was a great celebrity cameo because even Sheldon pointed out how strange it was for Adam West to just randomly be at his surprise birthday party, and West let it be known he was paid to come. It was a small role in the episode, but it was worth every minute.

As huge fans of Star Trek, The Big Bang Theory has seen its fair share of Star Trek actors make their way on the show including LeVar Burton who played Geordi La Forge. Fans were ecstatic to see Burton again when he appeared in season four’s “The Toast Derivation” before making two more appearances in seasons six and eight. Like many of the celebrities on the series, Burton played himself and had no problem poking fun at Sheldon, especially during a hilarious “Fun with Flags” segment. While his appearances weren’t as exciting as others, it was fun to see a former TV icon again.

As one of the world’s most renowned and celebrated astrophysicists, scientists and cosmologists, it was only a matter of time before Neil deGrasse Tyson made an appearance on The Big Bang Theory. He appeared as himself in “The Apology Insufficiency” and although his part in the episode is short, it was great. Sheldon confronts and blames Tyson for Pluto being demoted from planetary status, and when Tyson tries to explain that it wasn’t him and even tries to apologize, Sheldon isn’t having any of it.

Actor Billy Bob Thornton is one of the few stars to appear in the series and not portray himself, but he did a really great job as Dr. Oliver Lorvis in the season eight episode “The Misinterpretation Agitation.” Audiences are so used to seeing Thornton has a calm, cool, and confident character that it was refreshing to see him as a socially awkward doctor who thinks Penny is hitting on him when she sells him things through her pharmaceutical sales job. He of course ends up befriending the guys with his extremely impressive collection of “nerd” things, but then of course locks them in his basement.

Without a doubt, Wil Wheaton is one of the most under-appreciated recurring guest stars on the series. Since making his first appearance as himself in season three’s “The Creepy Candy Coating Corollary,” Wheaton has appeared in thirteen episodes and each time has been hilarious. As one of the most mocked Star Trek: The Next Generation stars, Wheaton has no problem making jabs at his role as Wesley Crusher and is a great nemesis for Sheldon as one of the few that doesn’t put up with Sheldon’s strange ways. Now, he and Sheldon have become friends more than enemies which makes his appearances a little less funny, but his appearances are always welcome on the show.

Many of The Big Bang Theory’s celebrity guest stars are brought on because of who they are, so they just portray themselves and that was the case in Steve Wozniak’s spot on the show. The iconic Apple co-founder appeared in season four’s “The Cruciferous Vegetable Amplification” where he goes to The Cheesecake Factory and is confronted by the “robotic Sheldon” that Sheldon had made for himself. Wozniak’s appearance was small, but it was hilarious, and goes down as one of the most memorable celebrity guest appearances on BBT.

The Big Bang Theory established early on that Leonard Nimoy who of course portrayed Spock in Star Trek was one of Sheldon’s biggest heroes. From the episode where Penny gifts Sheldon a napkin Nimoy wiped his nose on to Nimoy even getting a restraining order against Sheldon, he has always been a big part of the series’ background. While he never technically appeared in the series, he did lend his voice to season five episode “The Transporter Malfunction” where Sheldon’s Spock action figure talks to Sheldon while he is dreaming. It was weird, but absolutely hilarious, and Nimoy didn’t even need to actually be in episodes to have a major impact on the series.

Before her sudden and tragic passing in 2016, Star Wars actress Carrie Fisher made a rare television appearance in the season seven episode “The Convention Conundrum.” Her appearance was extremely short compared to many of the other celebrities, but it was worth it. The episode was actually focused around Sheldon hanging out with another Star Wars icon, James Earl Jones, and they doorbell ditch Fisher. She of course comes out with a baseball bat in an absolutely fantastic cameo.

While Carrie Fisher’s cameo was great in “The Convention Conundrum,” the episode revolving around James Earl Jones was pure gold. Over recent years, Jones has rarely made TV appearances, so not only was his role in the episode exciting because of that but for Sheldon to hang out with Darth Vader himself was iconic for the series. Their many antics together made for a lot of great and funny moments, and it didn’t get any better when the pair were on a ferris wheel and Sheldon yells, “Hey Los Angeles, I’m on a ferris wheel with Darth Vader. And he’s nicer than you think!”

Bob Newhart doesn’t have intense ties to science or a popular sci-fi series, but his parts on The Big Bang Theory were some of the very best. Unlike many of the others, Newhart did not play himself and instead was Professor Proton, kind of a “Bill Nye the Science Guy” from Sheldon and Leonard’s childhoods, and one of Sheldon’s first role models. He made his first appearance in season six’s “The Proton Resurgence” and begrudgingly took on the role of someone Sheldon turns to for advice. Even after Professor Proton passed away in the series, Newhart appeared as the ghost of his character, in full Obi-Wan robes, to give Sheldon advice in without a doubt his most hilarious appearance of them all. 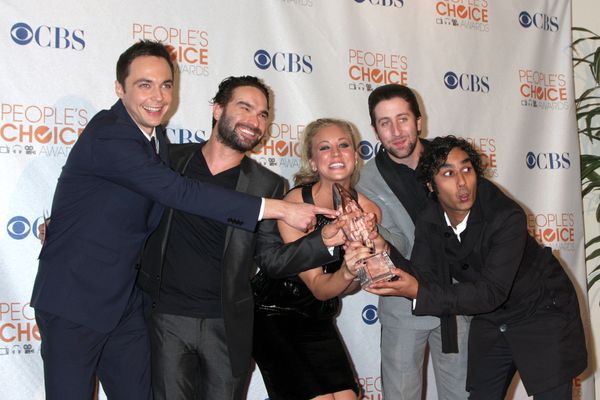 12 Things You Didn’t Know About The Big Bang Theory